Some Things You Did Not Know About West Africa 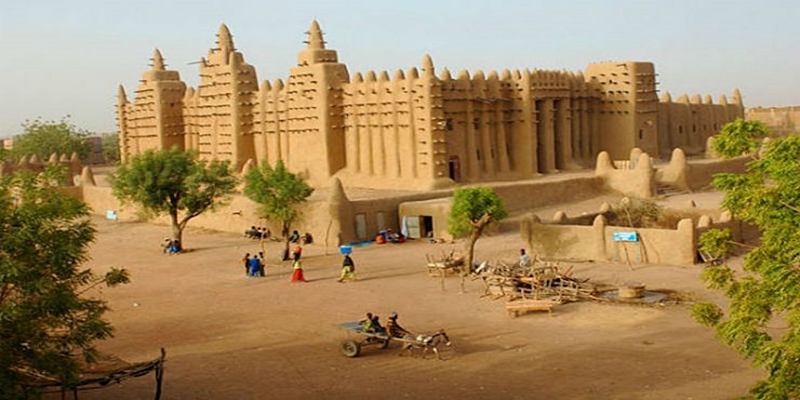 West Africans built in stone by 1100 BC. In the Tichitt-Walata region of Mauritania, archaeologists have found “large stone masonry villages” that date back to 1100 BC. The villages consisted of roughly circular compounds connected by “well-defined streets”.

By 250 BC, the foundations of West Africa’s oldest cities were established such as Old Djenné in Mali.

Kumbi Saleh, the capital of Ancient Ghana, flourished from 300 to 1240 AD. Located in modern day Mauritania, archaeological excavations have revealed houses, almost habitable today, for want of renovation and several storeys high. They had underground rooms, staircases and connecting halls. Some had nine rooms. One part of the city alone is estimated to have housed 30,000 people.

West Africa had walled towns and cities in the pre-colonial period. Winwood Reade, an English historian visited West Africa in the nineteenth century and commented that: “There are . . . thousands of large walled cities resembling those of Europe in the Middle Ages, or of ancient Greece.”

Lord Lugard, an English official, estimated in 1904 that there were 170 walled towns still in existence in the whole of just the Kano province of northern Nigeria.

Cheques are not quite as new an invention as we were led to believe. In the tenth century, an Arab geographer, Ibn Haukal, visited a fringe region of Ancient Ghana. Writing in 951 AD, he told of a cheque for 42,000 golden dinars written to a merchant in the city of Audoghast by his partner in Sidjilmessa.

Ibn Haukal, writing in 951 AD, informs us that the King of Ghana was “the richest king on the face of the earth” whose pre-eminence was due to the quantity of gold nuggets that had been amassed by the himself and by his predecessors.

The Nigerian city of Ile-Ife was paved in 1000 AD on the orders of a female ruler with decorations that originated in Ancient America. Naturally, no-one wants to explain how this took place approximately 500 years before the time of Christopher Columbus!

West Africa had bling culture in 1067 AD. One source mentions that when the Emperor of Ghana gives audience to his people: “he sits in a pavilion around which stand his horses caparisoned in cloth of gold: behind him stand ten pages holding shields and gold-mounted swords: and on his right hand are the sons of the princes of his empire, splendidly clad and with gold plaited into their hair . . . The gate of the chamber is guarded by dogs of an excellent breed . . . they wear collars of gold and silver.”

Glass windows existed at that time. The residence of the Ghanaian Emperor in 1116 AD was: “A well-built castle, thoroughly fortified, decorated inside with sculptures and pictures, and having glass windows.”

The Grand Mosque in the Malian city of Djenné, described as “the largest adobe [clay] building in the world”, was first raised in 1204 AD. It was built on a square plan where each side is 56 metres in length. It has three large towers on one side, each with projecting wooden buttresses.

One of the great achievements of the Yoruba was their urban culture. “By the year A.D. 1300,” says a modern scholar, “the Yoruba people built numerous walled cities surrounded by farms”. The cities were Owu, Oyo, Ijebu, Ijesa, Ketu, Popo, Egba, Sabe, Dassa, Egbado, Igbomina, the sixteen Ekiti principalities, Owo and Ondo.

Yoruba metal art of the mediaeval period was of world class. One scholar wrote that Yoruba art “would stand comparison with anything which Ancient Egypt, Classical Greece and Rome, or Renaissance Europe had to offer.”

In the Malian city of Gao stands the Mausoleum of Askia the Great, a weird sixteenth century edifice that resembles a step pyramid.

Thousands of mediaeval tumuli have been found across West Africa. Nearly 7,000 were discovered in north-west Senegal alone spread over nearly 1,500 sites. They were probably built between 1000 and 1300 AD.

Excavations at the Malian city of Gao carried out by Cambridge University revealed glass windows. One of the finds was entitled: “Fragments of alabaster window surrounds and a piece of pink window glass, Gao 10th – 14th century.”

In 1999 the BBC produced a television series entitled Millennium. The programme devoted to the fourteenth century opens with the following disclosure: “In the fourteenth century, the century of the scythe, natural disasters threatened civilisations with extinction. The Black Death kills more people in Europe, Asia and North Africa than any catastrophe has before. Civilisations which avoid the plague thrive. In West Africa the Empire of Mali becomes the richest in the world.”

Malian sailors got to America in 1311 AD, 181 years before Columbus. An Egyptian scholar, Ibn Fadl Al-Umari, published on this sometime around 1342. In the tenth chapter of his book, there is an account of two large maritime voyages ordered by the predecessor of Mansa Musa, a king who inherited the Malian throne in 1312. This mariner king is not named by Al-Umari, but modern writers identify him as Mansa Abubakari II.

On a pilgrimage to Mecca in 1324 AD, a Malian ruler, Mansa Musa, brought so much money with him that his visit resulted in the collapse of gold prices in Egypt and Arabia. It took twelve years for the economies of the region to normalise.

West African gold mining took place on a vast scale. One modern writer said that: “It is estimated that the total amount of gold mined in West Africa up to 1500 was 3,500 tons, worth more than $30 billion in today’s market.”

Mali in the 14th century was highly urbanised. Sergio Domian, an Italian art and architecture scholar, wrote the following about this period: “Thus was laid the foundation of an urban civilisation. At the height of its power, Mali had at least 400 cities, and the interior of the Niger Delta was very densely populated”.

The Malian city of Timbuktu had a 14th century population of 115,000 – 5 times larger than mediaeval London. Mansa Musa, built the Djinguerebere Mosque in the fourteenth century. There was the University Mosque in which 25,000 students studied and the Oratory of Sidi Yayia. There were over 150 Koran schools in which 20,000 children were instructed. London, by contrast, had a total 14th century population of 20,000 people.

National Geographic recently described Timbuktu as the Paris of the mediaeval world, on account of its intellectual culture. According to Professor Henry Louis Gates, 25,000 university students studied there.

Many old West African families have private library collections that go back hundreds of years. The Mauritanian cities of Chinguetti and Oudane have a total of 3,450 hand written mediaeval books. There may be another 6,000 books still surviving in the other city of Walata. Some date back to the 8th century AD. There are 11,000 books in private collections in Niger. Finally, in Timbuktu, Mali, there are about 700,000 surviving books.

A collection of one thousand six hundred books was considered a small library for a West African scholar of the 16th century. Professor Ahmed Baba of Timbuktu is recorded as saying that he had the smallest library of any of his friends – he had only 1600 volumes.

Concerning these old manuscripts, Michael Palin, in his TV series Sahara, said the imam of Timbuktu “has a collection of scientific texts that clearly show the planets circling the sun. They date back hundreds of years . . . Its convincing evidence that the scholars of Timbuktu knew a lot more than their counterparts in Europe. In the fifteenth century in Timbuktu the mathematicians knew about the rotation of the planets, knew about the details of the eclipse, they knew things which we had to wait for 150 almost 200 years to know in Europe when Galileo and Copernicus came up with these same calculations and were given a very hard time for it.”

The Songhai Empire of 16th century West Africa had a government position called Minister for Etiquette and Protocol.

The mediaeval Nigerian city of Benin was built to “a scale comparable with the Great Wall of China”. There was a vast system of defensive walling totalling 10,000 miles in all. Even before the full extent of the city walling had become apparent the Guinness Book of Records carried an entry in the 1974 edition that described the city as: “The largest earthworks in the world carried out prior to the mechanical era.”

Benin art of the Middle Ages was of the highest quality. An official of the Berlin Museum für Völkerkunde once stated that: “These works from Benin are equal to the very finest examples of European casting technique. Benvenuto Cellini could not have cast them better, nor could anyone else before or after him . . . Technically, these bronzes represent the very highest possible achievement.”

Winwood Reade described his visit to the Ashanti Royal Palace of Kumasi in 1874: “We went to the king’s palace, which consists of many courtyards, each surrounded with alcoves and verandahs, and having two gates or doors, so that each yard was a thoroughfare . . . But the part of the palace fronting the street was a stone house, Moorish in its style . . . with a flat roof and a parapet, and suites of apartments on the first floor. It was built by Fanti masons many years ago. The rooms upstairs remind me of Wardour Street. Each was a perfect Old Curiosity Shop. Books in many languages, Bohemian glass, clocks, silver plate, old furniture, Persian rugs, Kidderminster carpets, pictures and engravings, numberless chests and coffers. A sword bearing the inscription From Queen Victoria to the King of Ashantee. A copy of the Times, 17 October 1843. With these were many specimens of Moorish and Ashanti handicraft.”

From 100 Things You Did Not Know About Africa

This article has been read 102 times
COMMENTS