A Call for Peaceful Resolution in Ethiopia: Open Letter to the African Union and the United Nations 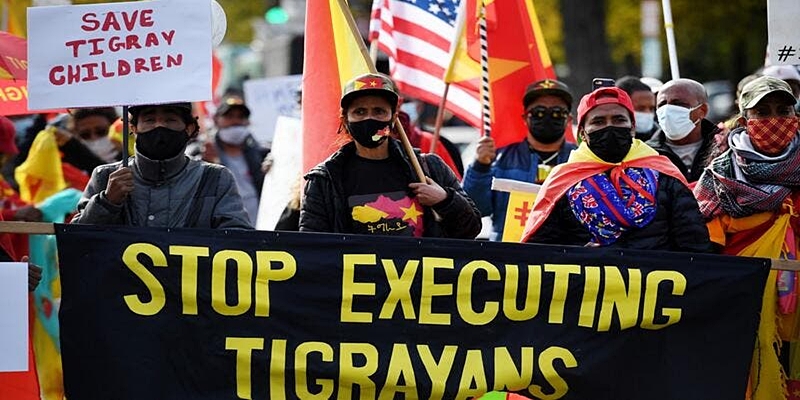 A letter written by Mr. Debretsion Gebremichael, the President of Tigray, to the United Nations on 20 December 2021 has created a golden opportunity for peace in Ethiopia. In the letter, Mr. Debretsion announced the withdrawal of Tigrayan forces from Amhara and Afar as a gesture for peace and reconciliation. He added “we trust that our bold act of withdrawal will be a decisive opening for peace.”

He called for a no-fly zone imposition on hostile aircraft over Tigray, imposing arms embargo on Ethiopia and its ally Eritrea, and the lifting of embargo on humanitarian aid. Other proposals in the letter included the release of political prisoners and international investigation of war crimes and crimes against humanity.

Security and Justice for Tigrayans (SJT) urges the African Union, the United Nations, and the international community to play its part and use this opportunity to bring peace to the people of Tigray and Ethiopia.

By withdrawing its forces, Tigray has fulfilled what the international community has been demanding. The US government acknowledged this gesture shortly after the announcement and stated that this could open “the door to broader diplomacy.” Unfortunately, the Ethiopian government has rejected the call for peace and, instead, Prime Minister Abiy has called the announcement “a cover-up for military setbacks.” Such an attitude and distortion of reality can only lead to the continuation of the present vicious circle of violence.

Tigray has suffered enough and deserves peace today. According to a joint statement of the Amnesty International and Human Rights Watch (December 16, 2021), armed forces from Ethiopia’s Amhara region have stepped up killings, mass detentions and expulsions of ethnic Tigrayans in neighboring western Tigray. According to the statement, “Tigrayan civilians attempting to escape the new wave of violence have been attacked and killed. Scores in detention face life-threatening conditions including torture, starvation, and denial of medical care.” The United Nations Office for Coordination of Humanitarian Affairs (OCHA) has reported that 1.2 million people have been forced out of western Tigray since the conflict began, including more than 10,000 in the last week of November. Western Tigray has remained inaccessible to aid agencies or the media.

The notorious Amhara regional police and militia known as Fano (mirroring the Interahamwe of Rwanda) have continued their atrocious extermination, murder, and expelling of Tigrayan civilians remaining in several towns of Western Tigray. Those attempting to escape the new wave of violence have been attacked with machetes and axes. There are house-to-house roundups of Tigrayans by Fano militia who separated families, expelled women and younger children, as well as sick and old people to Central Tigray. These displaced Tigrayans are desperate for news about the safety and whereabouts of their loved ones who are left behind.

Fano militia killed many Tigrayan mercilessly during roundups in Humera on 20 and 21 November and left their bodies on the road. In some areas bodies remained unburied, to the extent that “the whole town smelled and was filled with dead bodies” according to a witness. The Amhara police and Fano militia have held hundreds of Tigrayans in overcrowded detention sites in Western Tigray. They remain under appalling conditions with frequent beatings, torture, insults, and the denial of food and medicine. In some sites, they keep up to two hundred people in a 3-by-4-meter dark and stinking room. The state-sanctioned murder, extermination, massive imprisonment, torture and forced dislocation of people are a component of the government’s genocidal policy against Tigrayans. They also constitute war crimes and crimes against humanity.

The arbitrary arrest, detention and disappearances of Ethnic Tigrayans across Ethiopia have been amplified since Mr. Abiy declaration of emergency on November 2, 2021, while civilians in Tigray have experienced gang rapes, man-made famine, and mass expulsions. The deputy UN rights chief, Ms. Nada al-Nashif have raised her utmost concerns recently: She said “we estimate that between 5,000 and 7,000 remain detained, including nine UN staff members. In reality the number of people incarcerated in the dungeons and concentration camps of Mr. Abiy is more than 100,000. Many are detained incommunicado or in unknown locations. This is tantamount to enforced disappearance, and a matter of very grave alarm. For all practical purposes, this is part of a genocidal attempt to wipe out people of Tigrayan ethnicity regardless of their age, gender, and political affiliations.

The Ethiopian government’s humanitarian blockade continues to prevent more than 90 percent of critical assistance from reaching Tigray and conflict-affected areas of Amhara. According to the Belgian-based Ghent University project, the Tigray region suffers from “a minimum of 425 hunger deaths per day, and a ‘conservative maximum’ of 1,201 per day.” The affected populations will quickly reach food “crisis” alongside the 5.2 million Tigrayans who have gone months without sustained assistance.

The perpetration of genocide, war crimes and crimes against humanity reached such an alarming point that even the Ethiopian authorities could not deny. A joint investigation by the UN Office of the High Commissioner for Human Rights (OHCHR) and the government-sponsored Ethiopian Human Rights Commission (EHRC) was set up but failed to come up with an authentic report due to its lack of independence and impartiality. As professor Jan Nyssen of Ghent University noted: “We have mapped allegations of 260 massacres committed during the Tigray War. The team behind this survey has only visited five or six of those locations.” They found evidence of widespread violations of international human rights and humanitarian and refugee laws by all parties that may amount to war crimes and crimes against humanity. The report concluded that “the seriousness of these allegations calls for independent investigations and appropriate prosecution of those responsible,” and said that an international, independent mechanism can be established to collect evidence of the atrocities in preparation for future criminal prosecution.

As a sincere attempt to fill up the gap, the United Nations Human Rights Council adopted a resolution that won the council’s approval to form a three-person commission with a one-year mandate to conduct an independent into human rights violations and rights abuses in Ethiopia.

The Government of Ethiopia delegation rejected the Council proceedings as politically motivated interference. The Ethiopian ambassador in Geneva called it a “deliberate destabilization effort” and said the government “will not cooperate with any mechanism imposed on it.”

The reason behind the Prime Minister Ahmed’s rejection of the multitude of regional and international calls for peace, including the most recent ones by the TPLF leader and the UN Human Rights Council, should be found in his tyrannical and war-mongering attitudes.

New evidence shows that he had been planning invading Tigray, months before war erupted 13 months back, even before winning the Nobel Peace Prize in 2019. It was a well-planned and deliberate war for him. Th Nobel prize emboldened Mr. Abiy and his new ally Mr. Isaias to secretly plot a course for war against their mutual enemies in Tigray. They both viewed the Tigrayans as a threat to their autocratic rules and future for strong, authoritarian, and centralized regimes. The mysterious assassination of the Ethiopian military chief, Gen. Seare Mekonnen, an ethnic Tigrayan, who was shot dead by a bodyguard in June 2019, was an alarming sign. Some 17 months later, Mr. Abiy moved troops toward Tigray and sent military cargo planes into Eritrea. Those who disagreed were fired, interrogated at gunpoint, or forced to leave. Eritrean soldiers flooded into Tigray from the north. Amhara Special Forces arrived from the south.

Mr. Abiy Ahmed fired the Armed Forces Chief of Staff, the Amhara General Adem Mohammed, who was said to have had doubts about the invasion. He justified his war of aggression against peaceful Tigray in the name of “law enforcement operation” in Tigray.

The vicious circle of war and carnage will continue in Ethiopia unless and until the concerted efforts of peace-loving people and countries as well as regional and international bodies pressure Mr. Abiy Ahmed to accept peace and come to the negotiating table. Please help the people of Ethiopia end the carnage.

This article has been read 214 times
COMMENTS