Lie-Telling as Crass Opportunism in Politics 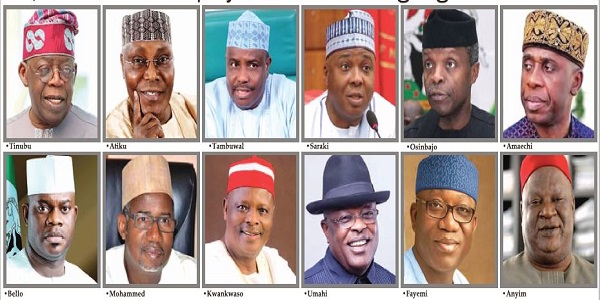 I have lived in this country long enough to know that Nigerian politics is largely a fraudulent profession in which the political elite engage largely in public deception. From the First Republic until now I have not noticed any appreciable change of direction or tactics.

From era to era they often come up with a new bag of tricks to hoodwink the public. And they have been largely successful in this game of trickery because our people and institutions are willing collaborators in this game of complicity, abatement and confederacy. One of those institutions that is guilty as charged is the media, an institution that ought by its mandate to stand guard over the public interest.

Now, a large gang of politicians is on the prowl already telling the public why they want to run Nigeria as its president in 2023. Apart from the well-known names such as the former Vice President, Alhaji Atiku Abubakar, former Governor of Lagos State, Asiwaju Bola Tinubu, former Senate President Dr. Bukola Saraki, former Senate President Mr. Anyim Pius Anyim, a serving Minister, Mr. Rotimi Amaechi and a battery of serving state governors, there are also the virtual unknowns.

A young lady, 38 years old, Ms. Khadijah Okunnu-Lamidi has also threatened to throw her hat or wig into the ring. Eventhough she has two degrees in Business Management and Strategic Projects her best known qualification is that she is the daughter of Chief Femi Okunnu, a respected former Federal Commissioner for Works and Housing. When she spoke to ThisDay Style she said that her entry into the race is “not a publicity stunt. It is a desire to serve a country that I love and within which all my future resides. I have no money with which to escape if it goes up in flames.” Some people are convinced that it is up in flames already.

As if she intends to add a bit of humour to the present state of anomie, a woman, 102 years old, Ms. Nonye Josephine Ezeanyaeche has told the NTA that she has good plans to execute for the benefit of Nigeria if she is voted in as President in 2023. The woman who is nicknamed “living legend” and “Mama Africa” is the founder of the “Voice for Senior Citizens of Nigeria Group.” In Africa almost anything is possible.

A Zimbabwean First Lady had told her countrymen that her aged husband who was falling and rising and falling at campaign rallies could win an election even as a corpse. He has since died and that prophecy has not yet been fulfilled. Eventhough I don’t have any problem with old age as a qualification for service I think Ms. Ezeanyaeche has carried the joke a bit too far.

Let me say straight away that I have no problem with a large number of contestants showing interest in running Nigeria. That has been the pattern except in 1983 and 1999 that we had only two presidential candidates. In 2007, we had 27 aspirants while in 2019 we had whopping 73 candidates. Having a large contingent of aspirants does not mean that everyone is a serious contender. Most of them are there to have some bit of visibility so as to negotiate favourably for some crumbs from the table of the winner or potential winner.

As I said earlier our political season is the season for lie-telling and fabrication. In the First Republic we had politicians piling sand on some untarred roads giving the impression that the bone-breaker roads were about to become the newest highways in the universe. After the elections they packed the sand away with the road remaining untarred. In that same Republic we were told that it was fashionable for some politicians to sign cheques with their toes. If the security agencies engaged a handwriting expert to identify who signed the cheque it turned out to be a wild goose chase. And when Major Chukwuma Nzeogwu and his colleagues overthrew the Balewa government he talked of corruption in terms of 10 per cent. Today, what is the percentage of corruption?

In our governance culture public deception has become a near normal. Our media have reported several times of electricity commissioning settings in which an electricity generating set is tucked away in the bush and used for the commissioning. After commissioning, darkness returns to the community forever.

I attended a political meeting sometime ago at which we were expected to write our names and sign on a sheet of paper provided. I did just as the other attendees did. Two days later, I found my name and signature attached to a communiqué that was never discussed at the meeting. I was livid. I was flabbergasted. I knew I had been conned. I am told that goes on all the time in political circles.

Today, we hear a lot about how God has chosen this or that person to lead us at the federal or state level. This is a crass exploitation of the gullibility of the people since Nigeria is a country where there is a surfeit of churches and mosques with only a sprinkling of truly godly people. If most Nigerians are godly how come this country looks like a coffin? So in this political season the fraudulent act of misusing God’s name will be the vogue since they know that God in His Eminence will forgive their fraudulent venture and will not strike them dead for their irreverence and heresy.

In the past few years there have been attempts, through legislation, to put a bar on campaign funding. But that is where the story starts and ends. This regulation has been observed more in the breach than in the observance. One man steps out at a fundraising event and says that he and his friends are donating XYZ sum of money. The sum of money will obey the rule but the names of his friends are not known. That is what Yoruba calls “ojoro” (fraud).

During the last presidential campaign, Candidate Muhammadu Buhari, an ultra-conservative individual, was packaged by his handlers as a forward-looking, change-seeking, transformational leader who is a patriotic, nationalistic, unifier. As a partial evidence he was draped in Igbo, Yoruba, Hausa, English attires, as evidence of his cosmopolitan-ness and unprovincialness.

This commodification achieved the effect it was intended to achieve: public deception. To close the sale he was made to say that as President he will be for everybody and for nobody. He had by that noble statement of statesmanship hoodwinked us all. We all elevated him to a moral high ground that we thought when translated into action Nigeria will become a near Eldorado, a shiny city on a hill, while the economy will thrive, democracy will flourish and lives will be secure.

All of that, by hindsight, has turned out to be just that: empty ranting. This country is now deeply, deeply, divided; human lives mean next to nothing; our naira is like toilet paper now; partisanship and nepotism have taken firm root; corruption is walking on four legs. Many old people like me know that this country has never been anything as horrendous as this.

Government propagandists told us in the past that terrorism has been checkmated, that the terrorists are now going after soft targets only. Pray, how soft are military outfits that have been attacked in recent times? We are also told that why the country looks now like a coffin is because of the foundation laid by the PDP. Hogwash! So in seven years that foundation could not be dismantled and a new benign architecture erected in its place? They may as well blame Lord Lugard but Nigerians are not fooled.

Now, there is the insulting claim by some candidates that election forms were purchased for them by people who could hardly feed themselves in this COVID-19 ravaged economy. If they think that most people believe them, then they must be living in a fool’s paradise. Most Nigerians can guess correctly where the money came from, certainly not from those who are presenting the forms to their clients, and certainly not from Alhaji Aliko Dangote or Dr. Mike Adenuga. This fraudulent political choreography is part of the downside in our governance culture.

A few days ago the Governor of Kogi State, Mr Yahaya Bello, announced with fanfare his intention to run for the biggest office in the land. You must remember him as the man who said that COVID-19 does not exist and fought against every attempt by federal workers to help his state manage the pandemic. He had no evidence against science but he stuck irrationally to his guns. He told the world at the Eagles Square, Abuja during the announcement of his ambition that he made 2000 millionaires in Kogi State in the last seven years and if given the nod he will manufacture more millionaires for Nigeria.

Is the manufacture of millionaires his priority for Nigeria at this time? In any case, it will be nice for us to see the list of those newly minted millionaires by this prosperity preacher so that we can convince ourselves that in eight years Nigeria will, by his grace, cease to be the poverty capital of the world. As the season begins please watch out for more fictitious promises that epitomise crass opportunism as this one. They are coming.

This article has been read 300 times
COMMENTS