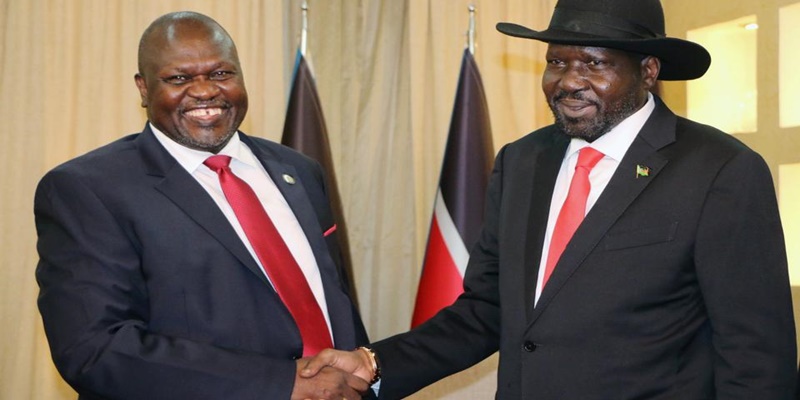 It is now clear to all discerning observers that the Revitalized Agreement on the Resolution of the Conflict in South Sudan (R-ARCISS) has fallen short and way behind schedule for the grand finale-the elections-to be held in a lucid fashion.

This is, of course, as a result of deliberate delays and political tomfooleries by the peace partners, especially President Salva Kiir’s side which has exhibited a decisive and deliberate lack of political will and calculatingly refuses to build trust.

It now seems clear that Kiir, FVP Machar, and the other actors in the government are increasingly getting content with and embracing the scenario of staying in power through negotiated agreement at the expense of the suffering people. They are collectively planning for an extension of the transitional period to stay on the seat. Since the leaders often treat the citizenry with contempt and disdain, when will the extensions then stop?

Kiir and Machar believe in mutually assured destruction and do not mind taking down the country and its people with them. They have seemingly become ‘inoculated’ against the suffering of the people and will do anything to cling to power.

The idea of staying on through negotiated agreements appeals to them all even if they have lost all legitimacy in the eyes of Junubin and the world.

Kiir, Machar, and the vice presidents have not even taken a tour together as peace partners outside of Juba to visit and build trust among the dying pile of humanity they willfully created.

In front of cameras, visiting high delegations, at the UNGA and AU, the members of the presidency talk nice and rosy, promising to restore peace but actually are a loose confederation of beguiled enemies now ensconced in a symbiotic relationship.

If they are genuine about peace and implementing the revitalized peace agreement, what is holding them back?

This is why it is important for the people of South Sudan, IGAD, Troika, guarantors, and all the entities that worked to craft the peace deal to face the reality and come up with new genuine and definite timelines, which will not be breached and extended, in implementing what has not been done.

If the collegial presidency and the signatories to the agreement are genuine that they want peace in the country, they will not resist this idea.

The security arrangements, the core of the agreement, have fallen terribly behind. How then can the government insist that elections will be held on time? Sham elections will take the already bleeding country further into the abyss?

None of the peace partners has even shown seriousness by asking the UN or any other bodies to step in and help with funding, preparing, and organizing the elections.

The UN has experience in organizing elections in post-conflict situations and this must be brought into play if we want free, fair, and transparent elections, which is the only way to avoid the country running amok.

Elections are an expensive affair involving census, demarcation of constituency boundaries, the printing of ballots, purchase of ballot boxes, logistics inter alia which will all be a very monumental and costly affair in a country like South Sudan that has never had proper elections. Please, refrain from mentioning the 2010 elections!

Now consider this, we have to hold elections for local councils, state parliamentarians, national legislators, and the president across 10 states. This not only poses a logistical nightmare but a challenge for illiterate voters.

The country’s nature and terrain also pose a logistical nightmare and the well-versed know you can only move things about in the dry season.

In the event of sham elections, as they are wont to be if organized by the government, amplified polarization, renewed mass killings, war crimes and crimes against humanity, etc. at a cataclysmic scale yet, will characterize the post-election period. We saw this after the last sham (2010) elections when people like the late Gen. George Athor and others rejected the results and took up arms. Do we want a repeat? Of course not.

The scale and magnitude of the violence will take on a life of their own. This will indubitably lead to, especially the troika, and other well-wishers having to dig deep into their pockets to deal with the ensuing humanitarian catastrophe. Again! The region will have to house even more refugees. Should we wait for this scenario to really unfold?

The flimflam has to be brought to a decisive close to avoid future recurrences by those who might feel emboldened because others got away with mass murder.

It is true that it is hard to make peace in a society of traumatized people who have only known war for generations, some of who are nomadic warriors who are predisposed to fighting, but sham elections will make the situation even more precarious as a result of runaway violence and lawlessness.

The guarantors of South Sudan’s peace deal, Sudan and Uganda, and by extension the IGAD countries, might geopolitically want to control events in South Sudan and leverage their economic and security interests there. However, wisdom dictates that their interests are better looked after if South Sudan is at peace with itself. In its current state of flux, the country supplies refugees, and small arms also find their way through the porous borders exponentially fueling crime in the Horn, East, and Central Africa.

Of course, on the flip side, some highly placed elements both in South Sudan and the region have and continue to benefit from the chaos.

So, I humbly suggest that the South Sudan elections be put on the international agenda so as to raise money for it and bring in the UN and other reputable bodies to administer them in a transparent manner that meets international standards. Seeing that we do not have any real experience in organizing free, fair, and transparent elections, is anyone and or local (political) entity that opposes this proposal anti-peace?

Naturally, the UNMISS armed forces will have to be doubled, No, tripled for effective elections security.

The prudent and affordable thing to do is to deal with the issue decisively to avoid future costs which will be more exorbitant. We should not predict tomorrow based on yesterday but rather prevent runaway violence, mass deaths, suffering, displacements, etc. by using our imagination.

I am also sure that in the event the peace deal is genuinely implemented, the hold-out armed rebel groups and other political outfits will also have no reason to remain out.

The author, Koka Lo’Lado, is a journalist and can be reached via kokalolado@gmail.com

This article has been read 137 times
COMMENTS