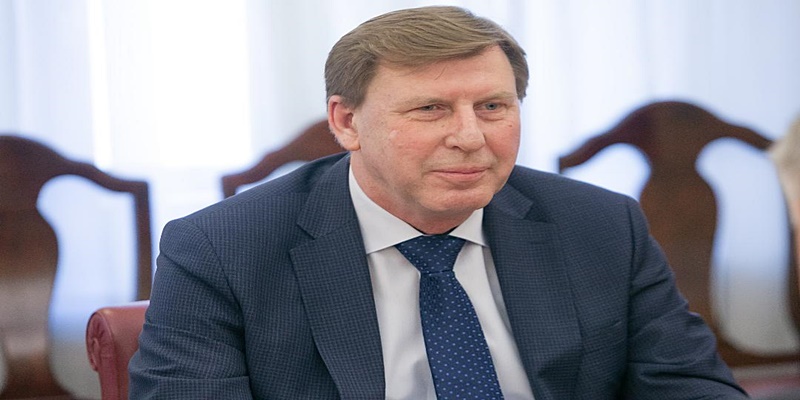 The Vice-President of the Chamber of Commerce and Industry of the Russian Federation, Mr Vladimir Padalko, has described the African market as very promising for Russian companies, especially those intending to localize their production on the continent blessed with several resources.

In this insightful interview with our Media Executive Kester Kenn Klomegah, he also discussed the existing challenges and emerging prospects especially for strengthening trade and economic relations with Africa, amid unprecedented stringent sanctions by the United States, European Union and their Pacific allies. Here are the interview excerpts:

What can we expect from the second Russia-Africa summit scheduled for this year? Is it worth talking about increasing the level of Russian investment, and strengthening interaction with African businesses?

The second Russia-Africa summit will be an important starting point for cooperation between the Russian Federation and African countries. Most countries on the continent have refrained from participating in anti-Russian sanctions. Therefore, we are talking about the formation of new approaches in a wide field of interaction, adjustment, or rather an expansion of those strategic tasks that were formulated at the first Russia-Africa summit.

Let me remind you that three years ago, priority areas for economic cooperation were identified in a number of industries. These are energy, infrastructure development, especially railway construction, mining and processing of minerals, agriculture, digital technologies, medicine, science and education. These priorities will be voiced at the second summit as well. I think that the main topic of the upcoming forum will be the formation of new tools for fruitful cooperation between Russia and Africa, including new methods of mutual settlements, logistics routes, media and cultural communication.

How competitive is the current African market for Russian companies and potential investors?

In recent years, many African countries no longer experience a lack of attention from foreign partners. Unfortunately, today the share of Western states, as well as China, in trade with African countries is much higher than Russia’s. But, nevertheless, our country is able to occupy significant niches in many areas. We sell very popular goods in Africa: fertilizers, oil products, wood products, plastics, rolled metal products, grain, certain types of machinery and equipment, and vehicles.

In turn, African countries are ready to supply the Russian market with a whole range of food products. In some countries, in particular, South Africa, there are good products in mechanical engineering, chemical, and food industries, which will also be useful for us today. The African market today is very promising for Russia, but also very difficult. Russian business needs to work on it thoroughly and systematically in order to achieve success.

Does the Chamber of Commerce and Industry of the Russian Federation intend to encourage Russian companies to localize their production in African countries, to expand trade and economic cooperation?

The Chamber of Commerce and Industry of the Russian Federation supports all positive trends in business, including foreign economic activity. The localization of Russian production in African countries is already a mature stage of cooperation when companies understand all the specifics of doing business in a particular country and are confident in the long-term nature of project implementation, and return on their investments. In my opinion, it is important to create a set of tools that will allow Russian companies to confidently develop their business with African countries.

The President of the Russian Chamber of Commerce and Industry Sergey Katyrin, in a letter to the Chairman of the Government of the Russian Federation Mikhail Mishustin, proposed to conclude intergovernmental agreements with African states on the use of national currencies in mutual settlements and payments. It was also proposed to work out the issue of establishing a specialized export-import bank and a trust fund to support the export activities of small and medium-sized businesses in African countries. We really need a Russia-Africa trading house.

In connection with the latest events in the world, international logistics have seriously changed. We need commodity hubs that work for several countries at once. As you can see, we are now at the stage of creating an infrastructure that will allow us to reach a qualitatively new level of cooperation between Russia and Africa.

Business needs vital information, knowledge about the investment climate, and the specifics of work in a particular country. Do you think there is an information vacuum between Russia and Africa?

The information vacuum definitely exists, and this obstacle should first be removed. One of the most effective tools in this direction is holding exhibitions. Experience indicates that business in Africa shows great interest in them. In connection with this, the CCI of the Russian Federation proposes to redirect the funds allocated for exhibitions in Europe to the organization of exhibitions and business forums in African countries.

But at the same time, it is necessary to work quickly – it takes an average of six months to prepare any exhibition, and the situation in this area can change dramatically. It is also necessary to organize business missions more often, hold roadshows, presentations of Russian companies in African countries. The online format of communication is good, but direct contact, so to speak, on earth is always effective and brings returns.

I would like to note that the CCI of the Russian Federation intends to actively contribute to the expansion of the network of trade representative offices in Africa. Currently, there are only four Russian trade missions operating on the continent; Morocco, Algeria, Egypt and South Africa. There should be more of them.

What hinders the development of trade and the influx of Russian investments into African countries?

Trade and economic cooperation is always a bilateral process. African countries need to further develop financial and investment infrastructure, which foreign partners, in our case, Russian ones, will be able to rely on. Do not hope that investors will come, find promising projects on their own and implement them at their own expense. At the same time, the experience of the Soviet Union shows that it is possible and necessary to cooperate with African countries in a broad format.

However, the economic model of interaction is now fundamentally different – no one will recklessly invest. All work is based on a mutually beneficial basis. At the same time, Russia is now living in fundamentally new economic realities. Many communications, logistics, and supply chains have been disrupted. Business is forced to adjust strategies for working with foreign partners and to look for new opportunities for their development. And in this situation, cooperation in friendly areas – with African countries – becomes one of the priorities.

What are your final motivating words for potential clients and partners in Africa?

Africa has changed a lot in recent years. A number of countries show high rates of economic growth, new industries are developing, enterprises are opening, and not in the sphere of primary processing of minerals and agricultural raw materials. The African continent has become a place of expansion for many foreign companies. Russia cannot stand aside from this process. Businesses need to take the initiative and take a certain risk – it is like two sides of a coin. The main thing is that our country has a good mood for the development of cooperation, and this is unambiguous on the part of African countries as well. So, we will succeed. There is a wide field of collaboration ahead.

The author writes a lot on Russia, Africa and the BRICS.

This article has been read 79 times
COMMENTS