Combatting Corruption for Good Governance and Sustainable Development in Africa 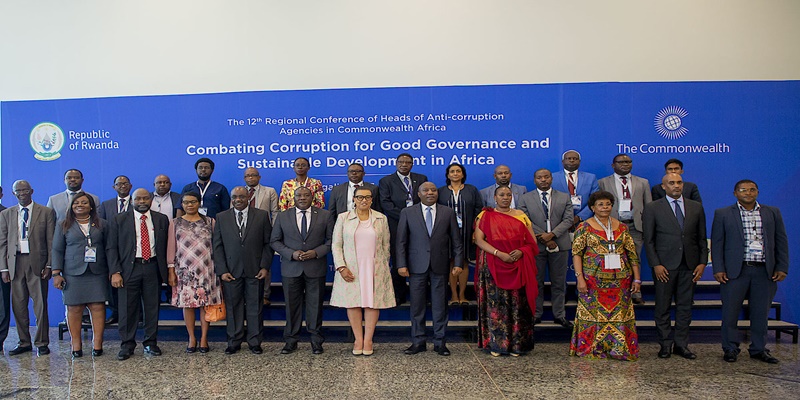 APPRECIATING the invaluable support and warm hospitality provided by the Government of Rwanda, the Office of the Ombudsman of Rwanda, the honour of the presence of Rt. Hon. Edouard NGIRENTE, Prime Minister of the Republic of Rwanda, who opened the Conference,

RECOGNIZING that corruption continues to be a key challenge in the Region and there is a need to strengthen continental and international cooperation and collaboration among the AntiCorruption Agencies in Commonwealth Africa,

CONCERNED ABOUT the heavy losses that Africa suffers as a result of illegal transfers of proceeds of corruption and crime and illicit financial flows out of Africa,

ACKNOWLEDGING the benefits of a platform for discussing emerging issues and sharing good practices and Country innovations in the fight against corruption, public sector management practices, the rule of law, transparency and accountability,

SATISFIED that a full exchange of views and innovative experiences among Anti-Corruption Agencies and other participants has taken place at the Conference,

i) pursue both preventive and enforcement measures in the fight against corruption within the unique context of each Country;

ii) strengthen co-operation and partnership with local, regional and both International and Civil Society Organizations and Media;

iv) convey to their respective Governments the importance of having Integrity Officers and anti-corruption units within Government, Ministries, Departments and Agencies;

i) the Secretary-General of the Commonwealth and the Government of the Republic of Rwanda to include Anti-Corruption measures including prioritization of the recovery of proceeds of crime, artefacts and illicit financial flows out of Africa as part of the resolutions of the Commonwealth Heads of Government Meeting (CHOGM) to be held in Kigali 2022;

ii) Member Governments to adopt and implement legislation on declaration of assets and civil asset recovery and forfeiture as part of anti-corruption measures;

v) Heads of Government and international community to strengthen collaboration towards speedy and unfettered repatriation of recovered assets to African Countries;

i) the President of the Republic of Rwanda for hosting the Conference;

ii) the Office of the Ombudsman of Rwanda for the warm hospitality extended to the Delegates during their stay in Rwanda and the success of the Conference;

4. FURTHER EXPRESS profound appreciation to the Secretary-General of the Commonwealth and Commonwealth Secretariat for the continued support to the Association of Anti-Corruption Agencies in Commonwealth Africa and co-sponsoring and co-organizing the twelfth Conference;

5. AGREE that the next Regional Conference of Heads of Anti-Corruption Agencies in Commonwealth Africa in 2023 will be hosted by Seychelles in partnership with the Commonwealth Secretariat;

6. ELECT Rwanda, Chief Ombudsman as the Chair and Seychelles Head of Anti-corruption Agency as the Vice-Chair of the Association of the Anti-Corruption Agencies in Commonwealth Africa.

This article has been read 68 times
COMMENTS