The Impact of Climate Change On Agriculture: A Zambian Farmer’s Perspective 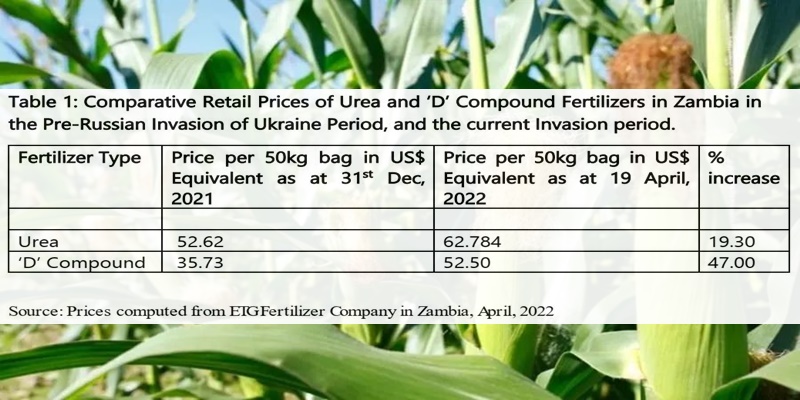 My name is Chanda Mongo from Lusaka, Zambia. I am a Socio-economic Researcher, and consultant. Today, I speak to you in my capacity as a farmer. In my brief comments, I’ll attempt to look at the impact of climate change, and the war in Ukraine on the agriculture sector in Zambia. I’ll particularly focus on the Zambian staple grain, Maize, or corn, as it is called in other territories.

In terms of production, 70% of the maize grown in Zambia is produced by small scale farmers, who predominantly depend on rainfed irrigation.

During years of floods or droughts, or both as the case has been in the current rainy season which is just about to end, crop yields get negatively impacted.

The rainy season in Zambia usually starts at the end of October/Early November. However, the 2021/2022 rainy season started only at the very end of December, which was almost two months late. Consequently, most farmers especially small scale farmers who rely on rainfed irrigation were undecided about planting their seeds, mainly maize.

The initial rain lasted only two to three weeks, after farmers had planted their seeds. Sadly, a drought which lasted about three to four weeks followed. This stressed most of the newly germinated crops in most farming areas in Zambia.

A number of farmers had to replant their fields when the rain was back. The most dominant feature of this return of the rain, was cyclone Anna, which was approaching from the South East coast of Africa, mainly Mozambique, where it left a trail of distraction. As the cyclone moved westwards inland though Malawi and Zambia, even though it lost some momentum over the thousand plus, kilometres distance, it still blew down a number of trees, crops and infrastructure. Amongst the catastrophic impacts of the cyclone on agriculture was the flooding of a number of crop fields, as well as the drowning of large herds of livestock, some of which were literally being swept into fast moving rivers, especially in the southern region of the country.

DEPENDENCE ON FERTILIZER AND THE VULNERABILITIES OF THE ZAMBIAN FARMER

It is noteworthy to mention that the varieties of hybrid seeds which are currently on the market in Zambia, like in many other countries are highly dependent on fertilizers in order for high yields to be attained. For more than five decades, chemical fertilizers are what have been in use on a large scale by large scale farmers, and small scale farmers, including the government supported and managed Farmer Input Support Programme (FISP), which targets small scale farmers.

Fertilizer being a major input in the growing of maize and other key crops, is invariably a prime driver of the cost of production and subsequently, inflation.

The current war in Ukraine has no doubt already begun negatively impacting the prices of fertilizers in Zambia.

Just to give an example, the prices of Urea fertilizer, whose inputs are less dependent on the Russian region, have gone up by 19.3 % in US $ equivalent terms between end of December 2021, and 19th April, 2022. On the other hand, the price of ‘D’ compound fertilizer, whose phosphates and other inputs are largely Russian dependent went up by 47% during the same period.

OWN MITIGATION MEASURES AT FARM LEVEL:

Arising from the above trend, at farm level, we decided to apply only animal manure, from our cattle, sheep, goats, and chickens instead of the chemical fertilizers which we have been using all along. To our pleasant surprise, we never suffered any reduction in yields or sizes of our maize cobs, pawpaw, bananas, oranges, or indeed the sizes of our vegetables (broccoli, cauliflower, cabbages, lettuce etc.). If anything the sizes went up. The market was very receptive to our farm produce.

LIKELY CONSEQUENCES OF CONTINUED WAR IN UKRAINE ON ZAMBIAN AGRICULTURE

It is projected by many global and local commodity commentators that should the war in Ukraine continue for longer, the chemical fertilizer prices for the next farming season starting end October/early November in Zambia will be even higher, leading to unsustainable crop production costs resulting in a real threat to food security at both household and national levels.

As a natural consequence, many AGOA targeted crops like cotton and tobacco will be negatively impacted in terms of output prices and volumes.

Going forward, it would be a great relief if under the AGOA programme, investments into the development and production of more drought resistant maize and other cereal seeds, were made.

Equally important, would be the development and production of organic and other non-Russian dependent fertilizers.

I am convinced that Civil Society will find time, interest and energy to lobby for the above two and other related recommendations, with the key global decision makers.

This article has been read 217 times
COMMENTS