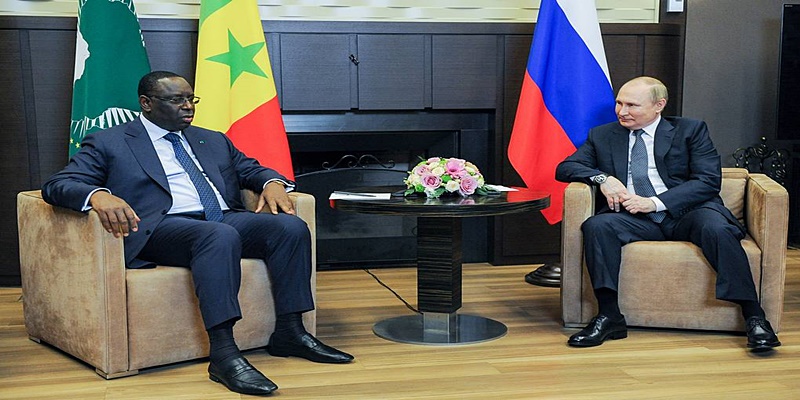 Senegalese President and African Union Chairman Macky Sall arrived in the south-western Russian city of Sochi with skylined aims of offsetting Africa's impending food crisis largely due to the Russia-Ukraine crisis that began late February after it was approved as "Special Military Operation" by both the State Duma and the Federation Council of the Russian Federation.

The Special Military Operation targeting "demilitarization and denazification" of Ukraine, now in its fourth month, has shattered the global economy, sent prices skyrocketing and generating deep-seated social discontent among the population worldwide due to raft of unprecedented sanctions imposed by the United States, European Union, Australia, New Zealand, Japan and host of other countries.

Nearly all African countries are struggling to contain the impact of the crisis, two years after the coronavirus pandemic had locked them up behind borders and unprecedented climate change compounding difficulties facing the continent. Acknowledging frankly, however, that it is about time to address the lapses in attaining economic independence, African leaders complained bitterly that they are direct victims of the Russia-Ukraine crisis. Russia has consistently brushed aside this accusation and rather blamed Western and European sanctions for the precarious situation that has equally engulfed Africa.

On the historic June 3, the African Union Chairman and Senegalese President Macky Sall, most possibly after several weeks of preparations, agreed with Kremlin administration for a negotiated meeting with Russian President Vladimir Putin. His explicit message in the portfolio, carried on behalf of the African leaders and from the African Union headquaters, was for the Russia-Ukraine crisis to be resolved peacefully through diplomatic dialogue.

Beyond that it all seems, Africans have no other way to reverse their addiction for food imports (in terms of Basic Economics for Beginners, turnabout settling for import substitution products), despite the huge arable land. The irreversible fact is that both Ukraine and Russia are major suppliers of wheat and other cereals to Africa, while Russia is a key producer of fertiliser.

"A number of countries voted for resolutions at the United Nations. The position of Africa is very heterogeneous but despite heavy pressure, many countries still did not denounce Russia's position," Sall explains, adding that entities that are far away from the hotbed of the conflict, such as Asia, the Middle East and Latin America, are still experiencing its consequences."

According to reports, 17 African countries abstained from voting on the resolution at the United Nations. The African Union, Regional Economic organizations and African governments are still and distinctively, divided over the Russia-Ukraine crisis due to divergent views and worse, afraid of contradictions and confrontations posed by the crisis and its effects on future relations.

According to Macky Sall, Senegal "supports the release of grain and fertilizers from anti-Russian sanctions."

On his part, President Putin unreservedly underscores Africa's role is growing, and that Russia will continue developing various aspects of the relations with African countries.

"Africa's political role in the international arena, in general, is growing. We believe that Africa as a whole and its individual states, with which we traditionally have very good, without any exaggeration, friendly relations, have great prospects, and on this basis we intend to further develop our relations with Africa as a whole and with its individual states," the Russian leader says.

"We are at a new stage of development and attach great importance to our relations with African countries," Putin notes.

According to him, the development of relations between Russia and Africa has shown positive results. In particular, the trade turnover is steadily increasing. "In the first months of this year it grew by 34%. We are striving to develop humanitarian ties with African countries and we will do everything possible to make this process gain momentum," he specifies, adding that Russia has always taken a great interest in African culture too.

Putin observes that Russia has always been on Africa's side. That is why the 2019 Russia-Africa summit that hosted dozens of African leaders in Sochi in a bid to reassert Russia's influence on the continent was held.

Moscow was a crucial player on the continent in the Soviet era, backing independence movements and training a generation of African leaders. Russia's ties with Africa unexpectedly declined with the collapse of the Soviet Union in 1991.

Talks about the starvation threat in Africa have been going on for a while. Agricultural shipments via Black Sea routes are stalled, particularly because Kiev has mined the waters around Odessa for fear of Russia trying to seize the port. Although Russia and Ukraine produce only a third of global wheat and barley exports, much of those are focused on Africa rather than on wealthier countries. This is why logistics and sanctions issues trigger a genuine famine.

"The visit of the African Union's delegation is actually nothing extraordinary because the parties exchange delegations a couple of times a year. It is during the pandemic that food price issues started to emerge. Besides, complications with foreign currency payments and Russia being prevented from making full use of maritime transport are creating additional difficulties. In particular, even if some companies agree to insure Russian vessels, their high rates inevitably affect prices for final customers," Deputy Director of the Russian Academy of Sciences' Institute for African Studies Leonid Fituni points out.