In the EAC, Ugandans Pass the Honesty Test 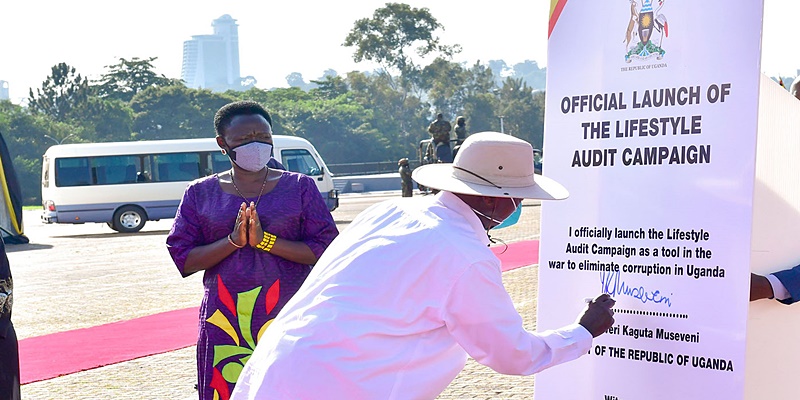 I’ll address myself to corruption in the upper echelons of power currently and then as far as Uganda is concerned.

You can accuse Uganda’s former rulers of everything you like but not of substantiated corruption. Though this can be wrongly taken as a generalization of the rulers of Uganda, I’ve been researching on them to see if there’s any who’s ever been accused of or committing any noticeable corruption compared to other corrupt former or current leaders in Africa in particular.

I’ll start with Uganda’s first president, Sir Edward Mutesa, whose tenure was short-lived before Milton Obote, the two-time power-crazy president sent him packing. Mutesa left power as clean as a whistle. He was never accused of or implicated in any corruption.  Mutesa died an uncontaminated man.

After Mutesa, came a bully, namely Obote who also, despite ruling Uganda twice, has never  been mentioned in any substantial corruption.

General Idi Amin, the man who ruled Uganda militarily for a good eight years and a few days came in. Nowhere was he adversely mentioned in connection to corruption. In his life and death, Amin remained famous and poor, with no mansion, parcel of land or a shop from any Indian or anything to mention or show except tens of children he sired.

Next came Professor Yusuf Lule, a 68-day president. Highly educated Lule didn’t show any proclivity for corruption. Is it because his time in office wasn’t enough for doing anything? Lule left spotless as he came in. He didn’t leave behind any parcel of land or millions in the banks to his legatees.

After Lule came Godfrey Binaisa who ruled Uganda for 327 days, the man of high probity who, after being deposed, went to the US and lived on his profession as a barrister. Circumstantial evidence shows that he didn’t mint any dosh illegally.

Binaisa’s successor, Paulo Muwanga was second in breaking the record for being a ten-day president of the country. For ten days, he didn’t have any chance to make any dosh. He became president, was kicked out and vanished.

After Muwanga came general Basilio Olara-Okello. He was the number one record breaker for being a two-day president, who, like Muwanga, didn’t have time to do anything substantial.

General Tito Okelo, an illiterate, also left as he came without making any dosh illegally.

Let me touch on the extraordinaire record breaker and holder, Museveni. Nobody has ever shown any provable corruption allegations against him. I must admit. I’ve researched a lot about the man to no avail. I’ve never even been lucky to come across the pictures of his posh mansion in Rwakitura. It’s been a daunting task to trace any of Museveni’s property.

Probably it is because he is still in office, controls all security organs, and it isn't easy to expressly tell if we’d hold him high just like those proven above.

In the original EAC members, namely Kenya and Tanzania, it is only the saintly Julius Kambarage Nyerere, Tanzania’s founder and Museveni’s cloner, who, like his colleagues from Uganda, left the office untainted in any form.

In sum, therefore, Ugandans seem to be more honest than the rest in the EAC. Yes, generally, our leaders or rulers show exactly who we're. For we chose or give birth to what look like us. Importantly, if the DNAs were to be bought and translocated or used as vaccines, I’d ask Uganda to export them to other countries–––minus two characteristics, namely the one of life presidency and coup d’état–––so that they’d vaccinate their corrupt rulers and their people. The rest is all history.

Mhango is a lifetime member of the Writers' Alliance of Newfoundland and Labrador and author of over 20 books.

This article has been read 201 times
COMMENTS