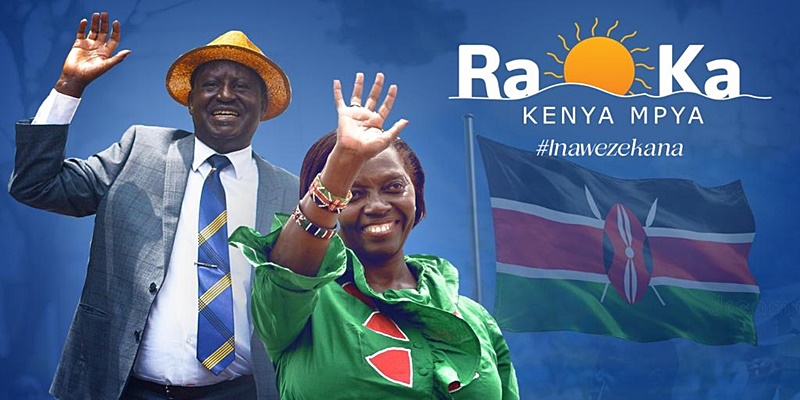 Kenyan voters are mostly focused on the person who will take over the leadership mantle from President Uhuru Kenyatta, whose second and last term in office comes to an end in less than two months. If the Infotrak poll conducted recently which, puts former Prime Minister Raila Odinga ahead of his opponent-deputy President William Ruto in the presidential race is something to go by, it may be clear that an Odinga Presidency deputized by honourable Martha Karua, is inevitable.

After the August 9th general election, those who will occupy different elective and appointed leadership positions will determine whether Kenya is going to remain an economic powerhouse in East and Central Africa or will continue to be impoverished through corruption and lose its stature.

The promises made during political campaigns are mere proposals. The Azimio la Umoja Coalition led by former Prime Minister Raila Odinga and deputized by former Minister for Justice and Constitutional Affairs, Martha Karua, has released a manifesto with a raft of promises to Kenyans.

To actualize the manifesto, the country has to be on a better financial footing since all the proposed programs will involve money.

The most severe challenges facing Kenya today are economic inequality, corruption, unemployment, mismanagement of public resources, and the public debt burden. Kenyans are waiting with baited breath to see what the new administration will do to cushion them from these malaises.

Will Odinga and Karua confront the purveyors of corruption head-on and seal all the loopholes that perpetuate the vice in order to put the country on the right economic footing? Tackling corruption will require goodwill from the Legislature, Executive, Judiciary and other constitutional bodies. It will also require a voracious push for fundamental policy steps and rule changes by the government in power. Injecting more funds into the (EACC) as well as influencing legislation to grant more powers to the body will be crucial.

Other critical challenges such as money laundering, stashing funds illegally acquired in offshore bank accounts, the drugs menace, and repossessing all grabbed public assets like public land, buildings, and funds hidden abroad by looters will be hefty for the new administration. The successful leaders will stride into an environment of turbulence and uncertainty.

Transparency and accountability are a panacea to managing and protecting public resources. Kenyans expect the new government to initiate an aggressive mechanism for asset recovery and management. This must be followed with full public disclosure of what has been recovered locally and from abroad, and the amount ploughed back into the economy. Kenyans are yet to be told by the current government led by President Kenyatta if the two memorandums he signed in 2018 with his Swiss counterpart Alain Berse and former British Prime Minister, Theresa May did yield some fruit to recover funds hidden in Swiss banks and the Island of Jersey.

Another critical challenge is how to cushion the country from over-borrowing from China. Over-borrowing has bloated the country’s external debt to a whopping 4.2 trillion Kenyan Shillings, which is about 35.8 billion US dollars. Failure to cut this will plunge the country into a "debt trap" and this will affect even unborn Kenyans on repayments. The borrower is a slave to the lender. In Sri Lanka, the country was forced to give up its two ports to China, as a result, of failing to service their loans. What will remain of Kenya if China claims the Port of Mombasa or Jomo Kenyatta International Airport if Kenya cannot curtail her appetite for loans from the Asian giant?

The new administration should focus on creating a conducive environment to attract foreign investors. This will be a boon towards job creation and human capital development, economic growth and providing tax incentives. No investors put their funds in an environment of uncertainty…where money laundering is a norm, and bribery, is a tradition, especially in getting government services. For instance, many US companies are ambivalent to invest in Kenya due to massive government bureaucracy, corruption, and high tariffs.

This article has been read 260 times
COMMENTS