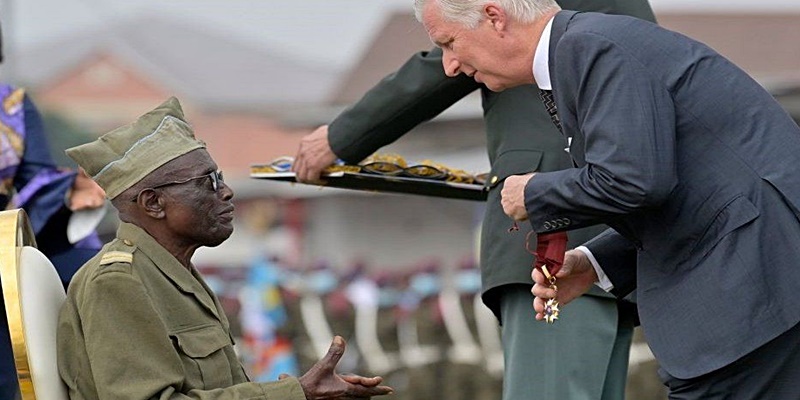 Last week marked King Philippe of Belgium’s first visit to the Democratic Republic of Congo (DRC) since his ascension to the throne. He visited with his wife, Queen Matilde. This visit comes two years after the king expressed regret for the monarchy’s colonial record in the DRC [Belgian King Expresses ‘Deepest Regrets’ for Colonial Past in Congo]. Recall that  King Leopold II of Belgium perpetrated a genocide in Congo,  ruling DRC like his personal property and committing some unspeakable atrocities, executing and maiming over 15 million Congolese during that time, in pursuit of the money that rubber (and other things) could bring.

Some ‘visible’ highlights of King Philippe’s visit last week were:

1) The Belgian king returned a giant mask known as Kakuungu used during healing ceremonies by the Suku people from the southwest region of the DRC; the king said the object was on “indefinite loan” to the DRC… The monarch said, “I wanted, during our visit at the National Museum and in your presence, to return to you this exceptional work in order to allow Congolese to discover and admire it. …It marks the symbolic beginning of the reinforcement of the cultural collaboration between Belgium and Congo.”

3) King Philippe lamented the racial colonial past; the monarch said, “On the occasion of my first trip to Congo, here, in front of the Congolese people and those who still suffer from it today, I wish to reaffirm my deepest regrets for these wounds of the past.”

Honestly, this is so pathetic! First can we all stop and imagine how much this one-week visit of the Belgian Sovereign must have cost the people of the DRC? How much was taken from the country’s coffers to accommodate the King and Queen of Belgium? How many hospitals, schools and roads will not be built because of his majesty’s visit?

Then the king comes and gives one mask! One mask! Seriously? One? Of all the masks that fill up the Royal Museum of Central Africa as an example, only one? Why that one in particular? Then the mask is given as an “indefinite loan”, the height of disdain!

Then, he acknowledges the last surviving soldier to have given his blood and sweat to Belgium… Although we are happy for Corporal Kunyuku, how convenient for the Belgians to wait for all of those they needed to pay pensions to die to have a ceremony with only one survivor left? … What about the families of others who served, did they get recognition from the King, medals, pensions?

Oh how I wish Patrice Lumumba was alive… he would have told the king to keep it! And actually we should all be telling his majesty just that! Keep your fake visit! Instead, tell us the true reasons of your visit: the needs for Belgium to reinforce economic partnership (get free deals from the old colony) amidst the Ukraine-Russia war; isn’t it easier to come sign and make sure all the diamonds, cobalt, and other minerals continue to flow to Belgium (let’s not forget the other European nations and the US) … Will we really want the mighty Belgium to starve without energy from Ukraine and Russia? And more importantly make sure that the DRC, the reservoir of minerals used in all electronics in the world, does not start a friendship with Russia and much more…

O poor Africa, you that the King of Belgium visits with one of your masks in hand and expresses regrets without actions… O poor Congo, after getting maimed, and dying on the frontline for Belgium, you get one little medal… the metal of which is not even as pure as what comes out of your own soil!

This article has been read 75 times
COMMENTS