Survey: Global C-Suites Feel the Strain of War in Ukraine, with Most CEOs Now Predicting Recession and Fears over Cyber Attacks Escalating 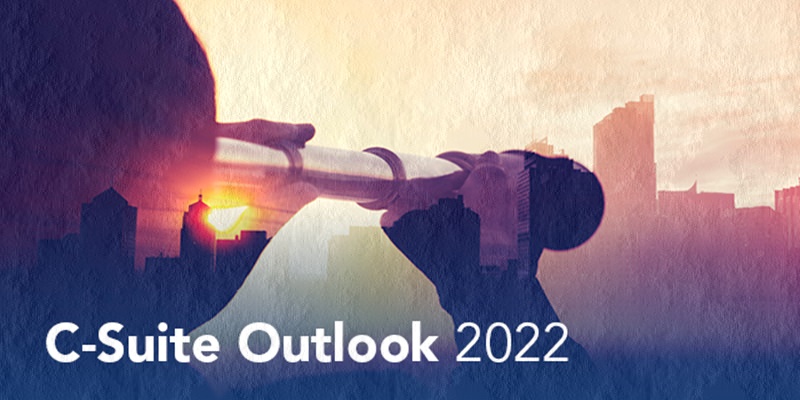 Recession. Cyberattacks. Inflation. Since Russia’s invasion of Ukraine, global CEOs have confronted a new world of extraordinary volatility and uncertainty, forcing many to reassess their growth assumptions and put strategic plans on hold. In fact, nearly 8 in 10 now expect a recession in their primary region of operation within the next 12 to 18 months—or believe one is already underway.

At the same time, the war is acting as a change accelerator, speeding new thinking in areas with long-term ramifications—including cyber risk, supply chains, renewable energy, and crisis and contingency planning. An astounding 9 in 10 CEOs are now concerned about Russian retaliation through cyberattacks—an area in which many firms recognized their lack of preparedness before the war.

According to the C-Suite Outlook Mid-Year—a special wartime update of an annual survey conducted by The Conference Board—Ukraine fallout is nearly universal across the world’s C-suites. Just 9 percent of surveyed leaders say the war will have “no material impact” on their business operations in the coming year—but even they are unlikely to escape the effect of surging energy and food prices. Indeed, respondents named its contributions to inflation among the war’s most damaging economic consequence.

Moreover, the mid-year survey reveals how the war has scrambled the landscape of priorities facing CEOs. In addition to cybersecurity soaring in salience, the unprecedented Western sanctions on Russia have elevated the importance of regulators and boards as key stakeholders, as well as raised the urgency of preparing for future economic conflict—especially with China.

Between May 10 and 24, The Conference Board surveyed 750 CEOs and other C-suite executives, primarily based in North America, Latin America, Asia, and Europe. The results paint the fullest picture yet of the depth and breadth of the war’s impact on the perspectives, priorities, anxieties, and future plans of business leaders around the world.

Insights from C-Suite Outlook Mid-Year include:

Strengthening supply chains: the number-one action CEOs are taking due to this war

CEOs favor secondary sanctions, but many worry about the blowback

CEOs reshuffle which stakeholders to prioritize: the board and regulators increase in importance

US-China tensions: CEOs say it will likely have a big impact on their business

CEOs see people and technology as key to long-term growth

Commentary on the survey results

“Historically high energy prices, renewed supply chain disruptions, heightened geopolitics risks, and eroding consumer confidence are all putting downward pressure on global growth. That’s on top of lockdowns in China and the cascading ripple effects of the war in Ukraine. These disruptions, along with restrictive monetary and fiscal policy decisions, are fueling recession expectations—with nearly 8 in 10 CEOs expecting their primary region of operations to be in recession within 12 to 18 months, if not already underway.”

Lori Esposito Murray, President, Committee for Economic Development of The Conference Board

“CEOs say rising US-China tensions are likely to have a major impact on business operations in the coming 12 months, ranking it among the top five impacts. This challenge is contributing to intense fears of a fundamental re-alignment of the global geopolitical landscape—the potential division of the world into competing Cold War–style economic blocs, pitting the US and its allies against China and its allies (including Russia). Such a division is likely to have significant negative impact on global trade and economic growth, and business leaders are awakening to the need to prepare: Already, 60 percent of US CEOs expect an economic decoupling over the next 5-10 years.”

“While an escalation of the war in Ukraine is certainly a concern for CEOs and other C-suite executives, their greatest worry is the threat of Russian retaliation through cyberattacks. Before the war, few saw cybersecurity as a major issue facing their companies. Companies need to make cybersecurity a sustained, and not just episodic, priority. Cyberattacks not only imperil a company’s data, operations, and reputation, but can have far-reaching societal and environmental impacts.”

“Reducing the use of the US dollar has been an objective of both Russia and China for over a decade, to help shield their currencies from US sanctions and assert global economic leadership. But now, as Russia pursues an aggressive policy to circumvent mounting economic sanctions, they are actively working toward an alternative world order not dependent on the primacy of the US and the dollar. Despite this, CEOs show very little concern about a lessening importance of the US dollar—just 16 percent are highly concerned.”

“As CEOs and other C-suite executives focus on ensuring the long-term growth of their business amid this volatile global environment, addressing labor force challenges will be essential. To do this, firms are doubling down on the hybrid work model, automation, and improving their recruiting processes and communication around business strategy.”

“As the war compounds already serious inflationary pressures, the biggest communications challenge brands now face is addressing rising prices in a forthright and persuasive manner. Trust in corporations has been built up through the long months of COVID-19, but that trust can be eroded if there is any sense of profiteering. Communicating the story to your customers is one to be handled carefully with honesty and transparency.”

This article has been read 76 times
COMMENTS