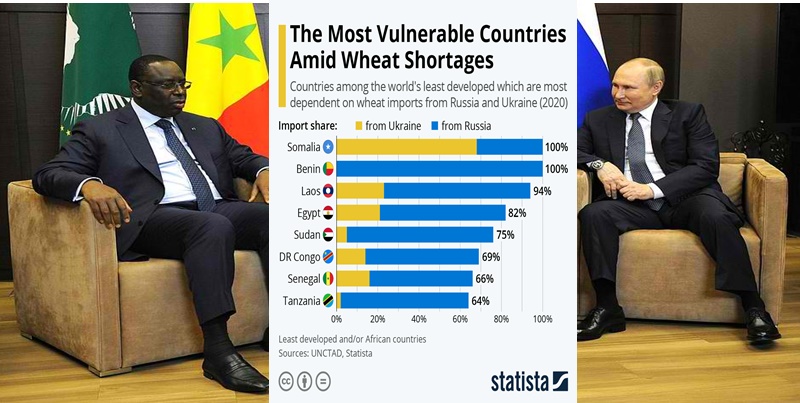 Russia’s “special military operation” approved by the State Duma and Federation Council to “demilitarize and denazify” the neighbouring former Soviet republic of Ukraine has shattered the global economy. The Ukraine crisis and its adverse impact and consequences is squarely blamed on Russia. Some experts believe that Russia and China are ambitiously creating a “new world order” to halt the unipolar system and hegemony of the United States.

Russia has come under a raft of draconian sanctions imposed by the United States, Canada, the European Union, Japan, Australia, New Zealand, and a host of other countries. The sanction-imposing countries are equally under the harsh conditions as many Asian, African and Latin American countries that are unbearably suffering from the global escalating prices. Wide-spread social discontent is also deepening against governments that support Russia’s invasion of Ukraine.

According to the United Nations Food and Agriculture Organization, nearly half of Africa’s 55 countries rely on Russia and Ukraine for wheat imports. Russia is a major supplier of fertilizer to, at least, 11 countries. Reuters news agency reports that Africa is suffering from disruptions in food supply and soaring prices of basic goods. The continent risks “disastrous consequences” if the situation endures, says African Union Chairman, Macky Sall.

Early June, Senegalese President and African Union Chairman Macky Sall and the African Union Commission Moussa Faki Mahamat went to the south-western Russian city of Sochi for a top-level meeting with President Vladimir Putin purposely to discuss measures which could alleviate the escalating problems related to the food and agricultural inputs, and to find some strategic solutions within the context of Russia-African relations.

Sall further explained: “… the countries that are so far away from the hotbed of the conflict are still experiencing its worse consequences.”

Putin on his part remarked: “We are at a new stage of development and attach great importance to our relations with African countries.” According to him, the relation between Russia and Africa has shown positive results. Russia has always been on Africa’s side and supported the continent in its fight against colonialism. Though never a colonial power in Africa, Moscow was a crucial player on the continent in the Soviet era, backing independence movements and training a generation of African leaders.

Russia’s ties with Africa unexpectedly declined with the collapse of the Soviet Union in 1991 and China has emerged as a key foreign power, investing in many sectors, on the continent. While Russia’s footprints and in Africa’s economy and infrastructural development is practically invisible, the United States, European Union and a number of Gulf States are investing significantly in Africa.

Putin’s meeting with Macky Sall and Moussa Faki Mahamat was very significant within the context of Russia-African relations. This high-level meeting shows that Russia’s interaction has entered a new stage of development with the African Union, including expanding political dialogue, bolstering more practical economic cooperation as well as re-identifying cultural exchanges with African countries.

An article published by the French Press Agency (AFP) says that talks between the AU leadership and the Russian president illustrate the importance of enhancing bilateral relations. While African leaders are attempting to build international peace and global security, it is also important to initiate a new drive to transform agriculture and industry throughout Africa.

With the changing global situation, there is need for reviewing policies. Africans have to understand that the “new global order” as globe-throttled by Russia and China has limitations. Experts say that Russia is limited by its own global economic footprints and can only seek alliance with and swim in the glory of China that has spent years expanding and practically setting its economic policies around the world.

The economic consequence of the Russia-Ukraine crisis is a signal for African leaders to rethink about designing import substitution policies. It seems that Africans have no other way to reverse their addiction for food imports that take a significant part of their budgets, despite the continent’s huge arable land.

A number of reports published by the International Monetary Fund (IMF), the World Bank (WB) and many international organizations and academic institutions in March and April show that Sub-Saharan economies are likely to be impacted by the tightening of global conditions and reduced foreign financial flows into the region. Fuel and food prices will translate into higher inflation across African countries, hitting the already vulnerable and impoverished population hard.

Some point directly to the increased likelihood of civil strife as a result of food and energy-fueled inflation. “As African countries face continued uncertainty, supply disruptions and soaring food and fertilizer prices, trade policy can potentially play a key role by ensuring the free flow of food across borders throughout the region. Amid limited fiscal space, policymakers must look to innovative solutions such as reducing or waving import duties on staple foods temporarily to provide relief to their citizens,” says Albert Zeufack, World Bank Chief Economist for the Africa.

African countries are struggling with recovery efforts after two years of Covid-19 that locked them behind borders. The recovery remains uneven, incomplete and happening at varied rates of speed across the region.

Ms Kristalina Georgieva, Managing Director of the International Monetary Fund (IMF), has urged African countries not to close down trade while calling for deeper investment especially in agriculture: “The message the world needs to hear is, keep trade open. Africans can help Africans by urgently investing in more food production in the continent. We are looking for ways to invest with you in resilience to shocks, especially climate shocks.”

Under the article headline “Harness Africa’s Agric potential to feed the World” published in April, Dr Akinwumi Adesina, the President of the African Development Bank (AfDB) Group, has charged African countries to harness their agricultural potential and become the global food buffer. His argument is based on the basic fact that the continent occupies about 20 per cent of Earth’s total land area, and 65 per cent of uncultivated arable land. Unlocking its potential would make it a solution to the global food crisis.

Dr Adesina, observes: “Africa must become a solution to global food crisis by unlocking the full potential of its agricultural sector. What Africa does in agriculture will determine the future of food in the world, because Africa has 65 per cent of all the arable land in the world that is not yet cultivated.”

The Feed Africa strategy for Agricultural Transformation in Africa (2016 to 2025) was initiated to make Africa a net food exporter, contribute to eliminating extreme poverty in Africa and end hunger and malnutrition in Africa by 2025.

According to Dr Adesina, “Africa does not need bowls in hand, Africa needs seeds in the ground and mechanical harvesters to harvest bountiful food produced locally. Africa must feed itself with pride. There is no dignity in begging for food.” The African Development Bank (AfDB) has brought home $1.5 billion for the African Emergency Food Production Facility.

The author frequently writes on Russia, Africa and the BRICS.

This article has been read 542 times
COMMENTS