Morocco: 69th Anniversary of the Revolution of the King and the People 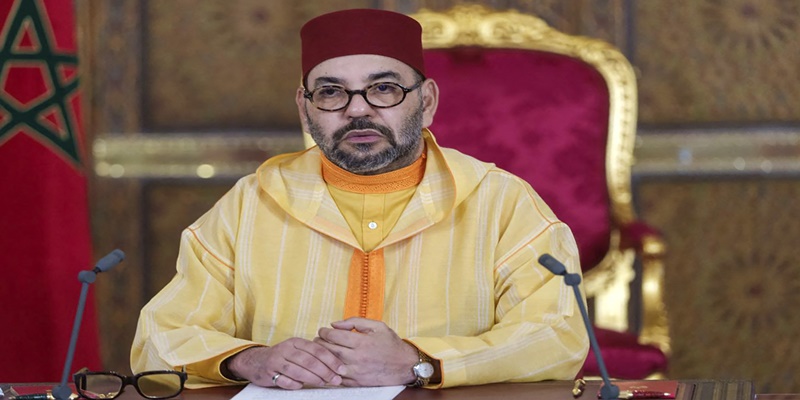 We are celebrating the anniversary of the glorious Revolution of the King and the People, which was a watershed event on the path towards independence.

It illustrated the bonds of affection and attachment between a king, who preferred exile to bargaining over the nation's unity and sovereignty, and a people, who made immense sacrifices to ensure the return of their legitimate king and to regain freedom and dignity.

With the same spirit of sacrifice and solidarity, we managed to achieve the nation's territorial integrity through the recovery of the Kingdom's southern provinces.

Over the last few years, there have been many major accomplishments at the regional and international levels regarding the Kingdom's just and legitimate stance on the Moroccanness of the Sahara.

A number of influential states have expressed support for the Autonomy Initiative within Morocco's full sovereignty over its territory as the only solution to this artificial regional dispute.

The firm position of the United States of America has been a source of real motivation – a position that is not affected by a change of Administration, nor is it influenced by new circumstances.

I also commend the clear, responsible stance of Spain, our neighbour that is well aware the origins and the reality of the dispute.

This positive stance has paved the way for a new chapter in the Moroccan-Spanish partnership – a chapter that is not affected by regional circumstances or by domestic political developments.

The constructive position regarding the Autonomy Initiative adopted by a number of European countries – which include Germany, the Netherlands, Portugal, Serbia, Hungary, Cyprus and Romania - will contribute to ushering in a new era of trust-based relations, and will help strengthen the qualitative partnership with these friendly countries.

At the same time, nearly thirty countries have opened consulates in our southern provinces, thereby confirming their clear support for the Kingdom's territorial integrity and the Moroccanness of the Sahara.

I should like, in this regard, to express my appreciation to my brothers the Kings, Emirs and Presidents of Arab sister nations, particularly those of Jordan, the United Arab Emirates, Djibouti and the Comoro Islands, which have opened consulates in Laayoune and Dakhla.

I also wish to extend my thanks to the other Arab countries which have consistently confirmed their support for the Moroccanness of the Sahara, especially the Gulf Cooperation Council States, Egypt and Yemen.

In the same vein, I should like to say how much I value the position adopted by our brothers in Africa; approximately 40% of African countries from five regional groups have opened consulates in Laayoune and Dakhla.

This dynamic trend also includes countries from Latin America and the Caribbean, as a number of states from those regions have opened consulates in the Moroccan Sahara, while others have chosen to extend their consulate jurisdiction to cover the Kingdom's southern provinces as well.

With these positive developments in mind - which concern states from all continents - I should like to send out a clear message to everyone: the Sahara issue is the lens through which Morocco looks at the world. It is the clear, simple benchmark whereby my country measures the sincerity of friendships and the efficiency of partnerships.

I therefore expect certain states among Morocco's traditional partners as well as new ones, whose stances concerning the Moroccanness of the Sahara are ambiguous, to clarify their positions and reconsider them in a manner that leaves no room for doubt.

The pivotal element in defending the Moroccanness of the Sahara is the unity of the domestic front and the full mobilization of all Moroccans - wherever they may be - to confront the plots of the enemies.

In this respect, I would like to salute and commend the members of the Moroccan expatriate community, who spare no effort to defend our territorial integrity on various platforms and in different venues.

Morocco, by the grace of the Almighty, has an expatriate community of about five million people, in addition to hundreds of thousands of Moroccan Jews around the world.

Moroccans abroad are quite special in that they are deeply attached to the homeland and strongly committed to the nation's immutable values. They are also keen to serve their country's best interests, notwithstanding the problems and hardships they are facing.

The firm human bonds as well as the pride taken in belonging to Morocco are not limited to first-generation immigrants. They are passed on, from one generation to the next, up to the third and fourth generations.

And yet, we must always ask ourselves: What have we done to consolidate that bond with the homeland? Do legislation and public policies take into account the particularities of our expatriate community?

Are administrative procedures adapted to their situations? Have we provided for the religious and educational guidance needed?

Have we given them the proper conditions and ensured the necessary accompaniment for the success of their investment projects?

It is a fact that the state is making significant efforts to receive Moroccans living abroad in the best conditions. However, that is not enough.

Regrettably, many members of our expatriate community are still facing a number of hurdles and difficulties with regard to administrative matters or the launch of their projects. These issues must be addressed.

As for the expatriate community's involvement in the country's development - a question I care deeply about - it should be pointed out that Morocco needs all its sons and daughters today. It needs all the skills and expertise of the Moroccan community abroad, either to reside and work in Morocco, or to engage in different partnerships, from the country of residence.

The Moroccan community abroad is known for its members' excellent skills and proficiency in various scientific, economic, political, cultural, sport and other sectors. This is, indeed, a source of pride for Morocco and all Moroccans.

The time has come to make sure the Moroccan community abroad gets the accompaniment it needs, to create the right conditions and to provide the means for our fellow citizens abroad to give their best and thus contribute to their country’s development.

I therefore insist on the need to create a lasting structural connexion with Moroccan experts and talents abroad, including Moroccan Jews.

I also call for the creation of a special mechanism to be tasked with accompanying these Moroccan experts and talents abroad and supporting their initiatives and projects.

This will make it possible to identify expatriate Moroccans with competencies, to stay in touch with them on a continuous basis, and to inform them of their country's potential, including the current development and investment dynamic.

In this regard, I call once again on Moroccan youths and on project holders residing abroad to make the most of the numerous investment opportunities in Morocco, as well as the incentives and guarantees offered by the new investment charter.

For their part, public institutions and the national finance and corporate sector are invited to open up to investors from the expatriate community, and to adopt, to this end, effective mechanisms to sponsor, accompany and partner with Moroccans residing abroad, for the benefit of all.

Finally, and given the aspirations of the Moroccan community abroad, the time has come to modernize and upgrade the institutional framework governing these cherished citizens.

What is more, the governance model of the existing institutions should be reconsidered with a view to enhancing efficiency and complementarity.

The spirit of the glorious 20th of August Revolution, together with its underpinning principles of sacrifice, solidarity and loyalty, will continue to light our way and inspire upcoming generations, in an environment characterized by national unity, territorial integrity, security and stability.