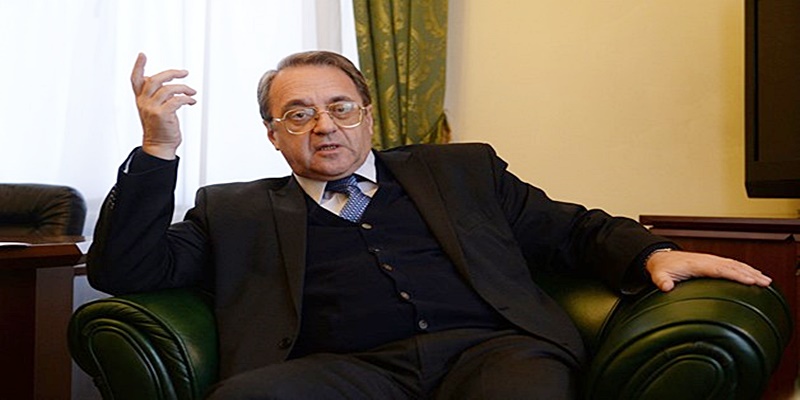 Since his appointment as the Russian Presidential Special Representative for Middle East and Africa, Mikhail Bogdanov has discussed the prospects for promoting relations with African countries. While this strictly falls within the scope of his official responsibilities, Bogdanov has to equally underline what has been achieved during his period. The changing global geopolitical situation is already known to all African politicians and business elites. Russian politicians spend most of the time drumming home known facts and criticisms against other players, instead of translating their passion into practical tangible actions in Africa.

Bogdanov's late April interview to Interfax correspondent Ksenia Baygarova focused on the problems with Russia's relations including the contradictions, confrontations and complexities with Western and European countries.

"Africa has always been an important region for us from the point of view of foreign policy," he stressed.

Further along the line, he blamed the United States, Britain and France - the colonizers - for Russia's weak performance in Africa.

He offered the accusation thus: "Another issue is that colonial powers, as well as neocolonialists, have never let the Africans take advantage of the treasure which is literally right under their feet."

Why does Bogdanov blame external countries for under-development in Africa? Africa has the capacity to overcome its own social, political and economic problems. The leaders have the power, political mandates and resources to address their current socio-economic and political challenges. Critics have often raised institutional and systemic corruption, lack of transparency and poor strategies among factors adversely affecting development in the continent.

With appropriate strategies, African leaders can achieve the seemingly elusive development and add value to living standards of the population. The African Union and, of course, the regional blocs have been guiding 54 countries on the continent under the slogan "Africa We Want" and a designed continental agenda - African Union Agenda 2063.

"Most importantly, given the sanctions imposed on Russia by the collective West, it would be necessary to substantially adapt many mechanisms of our cooperation with African countries to the new realities," Bogdanov told Interfax news agency.

Understanding this position, the best way to support Africa is for Russia to adopt new mechanisms of pursuing its policy goals by implementing bilateral agreements signed in the past years. Russia has to be focused, invest in the continent, build sustainable relationships and showcase concrete and feasible economic projects as China does in Africa. Despite criticism, China is constantly commissioning tangible projects in Africa.

Russia has been teaming up with China, India and a few other external countries to establish a new global economic system. China has strategically extended its tentacles across both the Atlantic and the Pacific, conquered Africa, and intensified commercial operations in the Central Asia regions including the former Soviet republics - the backyard of the Russian Federation.

Russia has to study its own limitations and standing blocks in Africa. Russia's external economic footprints are comparatively weak. Its foreign policies hardly promote its template of economic models. The geopolitical reordering of the world cannot simply be achieved through criticizing the West's political influence in its various global domains. The economic component is possibly the most significant for Africa.

Expert opinions on some aspects of the current Russia-African relations

According to our research findings, in stark contrast to key global players for instance the United States, China, the European Union and many others, Russia's policies have little impact on development paradigms in Africa. Russia is known for breaking promises, signing several bilateral agreements that are rarely fulfilled and highly inconsistent and ineffective strategies in Africa. This phenomenon is partly due to poor comprehension of Africa's roadmap as incorporated in the African Union Agenda 2063.

Russia's policies ignore Africa's sustainable development questions. Former Ambassadors who served in the Russian Federation have impressed upon African leaders and entrepreneurs to prioritize their critical sustainable development needs for which they sought Russian investors in economic sectors of interest to them. They have been clear on how to stimulate African governments to explore best investment opportunities in Russia and lure Russian investors into developing Africa's SDGs within a framework of bilateral cooperation.

According to Mandisi Mpahlwa, Former South African Ambassador, Sub-Saharan Africa has understandably been low on post-Soviet Russia's list of priorities, given that Russia is not as dependent on Africa's natural resources as other major economies. The reason: Soviet and African relations, anchored as they were on the fight to push back the frontiers of colonialism, did not necessarily translate into trade, investment and economic ties, which would have continued seamlessly with post-Soviet Russia.

"Russia's objective of taking the bilateral relationship with Africa to the next level cannot be realized without close partnership with the private sector. Africa and Russia are close politically, but they are geographically distant, and the people-to-people ties are still rather under-developed. This translates into a low level of knowledge on both sides of what the other has to offer. There is perhaps also a measure of fear of the unknown or the unfamiliar in both countries," Mpahlawa observes.

Professor Dr. Teketel Forssido, Former Ethiopian Ambassador, observes that one of the biggest problems has been the keen competition from the United States, Europe, China and India, countries with more advanced technological and development oriented solutions. They have become, over the past decades, "investment patrons" in African countries. In fact, this is what Africa needs: policy directed towards the development needs of Africa.

Former Nigerian Ambassador, Air Commodore Dan Suleiman, argues that Africa's drive for sustainable democratic governance, backed by an enhanced economically viable environment, is of paramount importance. Many African leaders are realising the need to eradicate poverty and give people a sustainable environment.

"It is important to remind foreign investors that investment opportunities for developing large and medium-scale enterprises abound in Africa. The informal sector can be harnessed to generate employment and promote self-reliance through higher productivity. We implore Russian investors to take advantage of these new potentials," Air Commodore Dan Suleiman stresses.

"Looking at the global development, Kenya should build on this long history of strong and comprehensive engagement, first and foremost, through developing closer ties with Russia in trade, investment and economic cooperation. Development opens a myriad of investment opportunities to all potential foreign investors across the globe including Russia. African leaders should think objectively, first about effective ways improving the economy," he says.

Former Mozambican Ambassador to Russia, Dr. Bernardo Marcelino Cherinda, emphasizes that changes in Russia have provided a greater impetus for forging new diversified relations in Africa’s economic sectors. African leaders have to work relentlessly for a more effective cooperation and use political dialogue to remove obstacles that might hinder smooth progress and development. Whether they like it or not, African leaders have to make rational decisions to align their efforts and policies with the key goal of developing or building their economies.

Russia and Africa should get involved in medium-sized economic partnership, joint ventures, agro-processing industries, and health and education. "It's equally important that Russia and Africa focus seriously on cultural aspects in order to bridge the widening information gap between the two. The use of soft power as an instrument for new image-making initiatives has to be intensified, Cherinda advises.

“Strengthening ties in a broad range of economic fields would show that SADC truly remains as one of Russia's key partners in Africa,” Stergomena Lawrence Tax, then Executive Secretary of the Southern African Development Community (SADC) observes. SADC is an inter-governmental organization with its primary goal of deepening socio-economic cooperation and integration in the southern region.

Foreign Minister Sergey Lavrov and Dr. Nkosazana Dlamini-Zuma, the first woman to lead the 54-nation African Union Commission (AUC), have also discussed the ways and means of encouraging Russian corporations' participation in major infrastructure projects on the continent. The current AUC Chairperson, Chad's Moussa Faki Mahamat, has been at pains to enlist Russia's effective support for the bloc's Agenda 2063.

Lavrov, since his appointment in 2004, has been holding in-depth discussions on the situation in Africa, repeatedly pointing to the possibility of continuing to promote effective bilateral cooperation in many spheres and working together towards exploiting the existing potentials. He has, several times, asserted that cooperation is multidimensional and that Moscow firmly supports the principle of "African solutions to African problems" within a framework of achieving the Sustainable Development Goals (SDGs) as developed by individual African countries, sub-regional organizations and the African Union. In conclusion, Russians have to strongly keep in mind that Africa's roadmap is the African Union Agenda 2063.

The author writes frequently writes about Russia, Africa and the BRICS.

This article has been read 1,795 times
COMMENTS