Access to Asylum, Territory and Justice – Context and Challenges in Africa 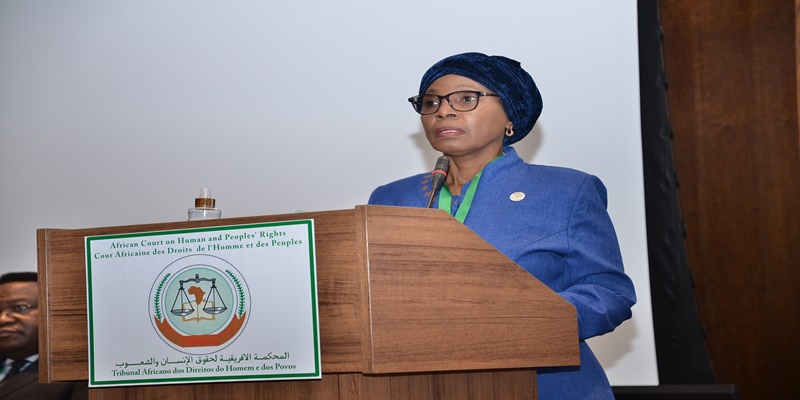 According to the UNHCR, at the end of 2021 there were at least 89.3 million people who had been forced to flee their homes because of persecution, conflict, violence, human rights violations or events seriously disturbing public order. The UNHCR further estimates that there are millions of other people who are stateless and as a result they lack access to basic rights such as education, health care, employment and freedom of movement. I must concede that collating data on refugees, asylum seekers, internally displaced persons and migrants, generally, has its own challenges but the truth is that the world continues to face a very grave challenge due to the forcible relocation of people. The fact that people who forcibly leave their homes have no choice should give us reason to pause and reflect on their predicament in a sober fashion. This sobriety that I am calling for should equally inform any solutions proposed for dealing with refugees, asylum seekers, internally displaced persons and migrants.

While the problems brought about due to the forcible relocation of people are a world-wide challenge, given where I am speaking from, permit me to focus on the African dimension to the problem. Africa is currently experiencing all forms of migratory trends which includes movement within Africa as well as movement directed outside the continent. Most prominent among these trends are labour migration, refugees and internally displaced persons. Unsurprisingly, given the general youthfulness of Africa’s population, a good percentage of the African population that is on the move comprises young people. Various reasons account for the preceding dynamic but at the core is the fact that many African countries have failed to match their population growth with adequate economic growth which would have in turn created opportunities, locally, to entice the youth to stay within their countries.

Whatever the cause, displacement of people remains a fact and the consequences that it brings about must be dealt with in an orderly manner. When I speak of the consequences being dealt with in an orderly manner, given my audience, I am actually suggesting that, first and foremost, we must invoke the applicable legal standards to deal with the situation. In this regard, I note with pride that Africa has, so to speak, taken the lead in adopting norms for dealing with refugees, asylum seekers and even internally displaced persons. I recall specifically the OAU CONVENTION GOVERNING THE SPECIFIC ASPECTS OF REFUGEE PROBLEMS IN AFRICA of 1969 which includes a more comprehensive definition of a refugee than its UN comparator. I believe the framers of this Convention must be applauded for taking cognisance of the peculiar African circumstances in drafting the Convention. I also note the AFRICAN UNION CONVENTION FOR THE PROTECTION AND ASSISTANCE OF INTERNALLY DISPLACED PERSONS IN AFRICA which entered into force on 6 December 2012 – this is the only continent-wide instrument so far dealing specifically with internally displaced persons.

The movement of human beings across the globe is not new. The dynamics of this movement, however, have changed with the passage of time and also the entrenchment of the Westphalian State across the world – as a matter of fact, we must acknowledge that these dynamics will keep evolving. So, for example, the truth is that during much of the colonial period, the movement of human beings was largely from the global north to the global south. This fact is often glossed over in many discourses on migration even though evidence in support of it abounds. What should be noted though is that, presently, the formalities for moving across borders abound and unfortunately it is persons who are most vulnerable who bear the greatest burden from these formalities and thus find it most difficult to cross national borders even though they have no choice. I dare say that this is what in part fuels the trade in people smuggling.

Given that the problems of forcible movement of people are here to stay, in the end we must still ask, what then? In my view, the quest must be for enduring and lasting solutions to the underlying problems that trigger the forcible displacement of people. At the bare minimum, interventions must be designed to comprehensively address the root causes of poverty on the continent; to arrest the environmental degradation that so much contributes to making living in certain parts of the continent impossible; and addressing the various governance issues that often trigger conflict. Only if the underlying causes are adequately dealt with, can humanity as a whole hope for a better tomorrow.

I deliberately speak of humanity as whole having hope for a better future because, in my view, the very nature of the problems brought about by forcible displacement of people cannot be localised to a continent or a region. Contrary to some popular perceptions, the problems of refugees and asylum seekers are not solely an African problem. The conflicts in Syria, Afghanistan and most recently Ukraine have thoroughly debunked this myth. In devising solutions to these problems, therefore, the world as a whole must unite because this is the only way in which meaningful solutions can be devised. It is important to recall that behind all the terminologies: refugees, asylum seekers, migrants, internally displaced people, are real people with families and connections who simply wish to have a better life.

For its part, the African Court on Human and Peoples’ Rights has also attempted to develop norms that clarify the manner in which States should treat refugees, asylum seekers and migrants. Given the constraints of time, I do not have the luxury of minutely dissecting the cases so far disposed of by the Court but a few general remarks about some of these cases will suffice. Let me begin by pointing out that the African Charter in Article 12 contains some fundamental protections for refugees and asylum seekers. Overall, Article 12 provides for the right to freedom of movement and residence to anyone lawfully within a country. It also provides for everyone’s right to leave his country and to return to the same. As for those under persecution, Article 12(3) guarantees the right to seek asylum in other countries. Further, under Article 12(4) and 12(5), firstly, non-nationals legally admitted to a country cannot be expelled except through a decision supported by law and, secondly, the mass expulsion of non-nationals is prohibited.

In Lucien Ikili Rashid v United Republic of Tanzania, the Court was faced with a case in which the applicant, a national of the Democratic Republic of Congo, alleged, among other things, that he had been illegally arrested, detained and deported from Tanzania. At the time of his arrest, the applicant was in possession of a certificate from the Tanzanian police which confirmed that his passport was lost. Ironically, in this case, the applicant’s permission to stay in Tanzania was in the very passport that was lost. Tanzania nevertheless went ahead and deported the applicant after declaring him and his family prohibited immigrants. Although the applicant alleged a violation of his right to free movement, the Court held that it was important to first resolve the question of his right to residence in Tanzania since his right to movement would automatically flow from his right to residence. Given that at the time of his arrest, the applicant had in his possession proof, from Tanzanian authorities, that he had lost his passport which contained his permission to stay in Tanzanai, the Court held that the applicant could reasonably have expected that the immigration authorities would attempt to verify this document before declaring him a prohibited immigrant. Due to the failures by the immigration authorities the Court established a violation of the right to residence as well as free movement under article 12 of the Charter.

I should also point out that one of the challenges that the Court has had to deal with pertains to the fact that the African Charter on Human and Peoples’ Rights does not contain an explicit provision on the right to nationality. This, however, was dealt with by the Court in Anudo Ochieng Anudo v United Republic of Tanzania and John Pennesis v United Republic of Tanzania. Generally, these two decisions confirm that while the grant of nationality is, in line with general international law, a prerogative of the state, any deprivation of nationality must be carried out through mechanisms that are supported by law in order to avoid creating situations of statelessness. Specifically in relation to the absence of a provision in the Charter dealing with the right to a nationality, the Court, in John Penessis invoked the Universal Declaration of Human Rights and interpreted article 5 of the Charter to conclude that the right to dignity includes, as a critical component, the right to a nationality. The Court thus held that any arbitrary denial of one’s nationality is incompatible with the right to dignity.

In Anudo Ochieng Anudo, the Court having found that the deprivation of the applicant’s nationality was arbitrary still had to resolve whether a citizen can be expelled from his own country and/or prevented from returning to the same. Drawing on developments in international law, the Court reiterated the fact that there are very few circumstances that can justify, under international law, the ban on entry into one’s own country. In this particular case, the Court, building on its finding that the applicant’s expulsion was arbitrary also held that there were no valid grounds for preventing the applicant from returning to Tanzania. In this case, the Court explicitly established a violation of Article 13 of the International Covenant on Civil and Political Rights. As a footnote, let me remind all distinguished delegates that the jurisdiction of the African Court extends to all other human rights instrument ratified by the State concerned and is not limited to instruments adopted by the African Union. It is for this reason that the Court was able to establish a violation of Article 13 of the ICCPR.

In conclusion, allow me to say a word or two about the INTERNATIONAL ASSOCIATION OF REFUGEE AND MIGRATION JUDGES. I surmise that the membership of this Association includes some of the most prominent policy movers in various countries. My invitation, therefore, is for this Association to be part of the movement for reinvigorating a common faith in the oneness of humanity. I believe acceptance of the oneness of humanity can form a solid basis for opening borders to refugees and asylum seekers while at the same time not chasing them to places where their lives could be in danger. I am alive to the fact, in practice, that this may not be easy but it is important to keep the hope.

Above all else, an Association such as the INTERNATIONAL ASSOCIATION OF REFUGEE AND MIGRATION JUDGES should be pivotal in developing evidence-based interventions for dealing with refugees and asylum seekers. I am mindful that in this social media era, it is very easy for misogynistic views and other prejudices to quickly gain currency. It behoves people like you to assist in maintaining societal sobriety. One important counter-narrative, that I personally would support, is that societies across our continent should be taught to view refugees and asylum seekers not so much as a burden but an opportunity and to work towards harnessing their potential contribution to the societies in which they live. With this perception it should progressively be easy to allow refugees and asylum seekers access to territory and all the concomitant protections that the law affords them.

President of The African Court On Human and Peoples’ Rights.

This article has been read 136 times
COMMENTS