Russia, China and the “Multipolar World.” The Kremlin’s Evolving Relations with Africa 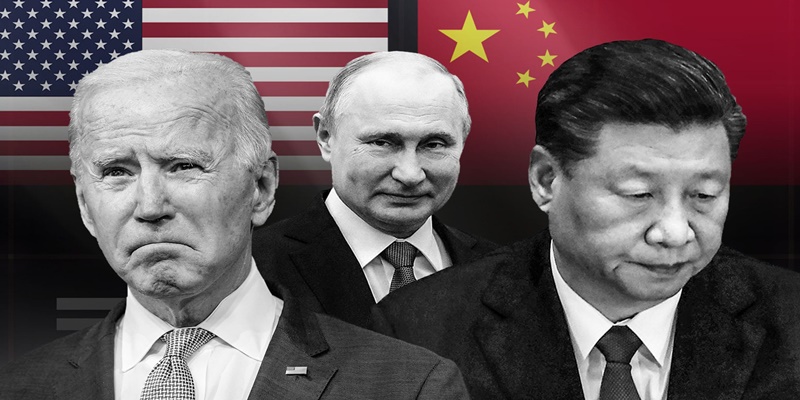 After a careful research to find the meaning and implications of the term “multipolar world” often used these days, the freedictionary and englopedia offer insights as a system of world order in which the majority of global leading powers coordinate and commonly agree on economic, political and cultural influence and mutually acceptable directions.

Both dictionaries further explain that countries have multipolar approaches to foreign policy. Participating countries necessarily conceive multiple centers of power or influence in the world, have a multipolar approach to foreign policy. Multipolar world could mean the various differences in thoughts, views and ideas regarding anything in particular which different people desire to do across the world.

It appears from several reports that China and Russia intend to lead the new world order. Speeches from both sides are extremely critical on “based rules and regulations” given by the United States and Europe. The United States global dictatorship might end, so that the unipolar would then become a multi-polar world in which democracy could actually thrive.

In practical terms and in order to lead multipolar system requires outward, broad and integrative approach. While China, to a large extent, has portrayed this practical approach which is readily seen around the world, Russia’s method is full of slogans, highly limited. With the emerging new global order, China appears more open and integrative than Russia. Despite the fact that it madly advocates for creating and ultimate establishment of this multipolar world, Russia exits significantly from a number of international organizations and the global stage, thus weakening and isolating itself and further contributing towards its own “cancel culture” instead of the opposite.

Whether people like it or not, the United States will conveniently operate within the emerging multipolar system. It has the necessary established [institutionalized] instruments to operate within the framework of multilateralism and integrative multicultural environment. The United States is and remains as an “indispensable” power. Russia and a few of its allies in this evolutionary process, without adopting cautious steps and strategic approach, will definitely remain “dispensable” in the end.

In order to deepen our understanding of the emerging multipolar world, it is useful to make comparisons. The United States new strategy acknowledges the fact that Africa will shape the future – not just the future of the African people, but of the world. And as such deals with the civil society, women’s groups and the youth which it refers to as the megaphone of governance. Building admirable public perception is part of the geopolitical games. These have influence on policies and processes engaging policy-makers in Africa.

Nevertheless, not everything is perfect. There is some high optimism that efforts after the first summit gain grounds. The comprehensive summit declaration offers the clear roadmap for building relations. But Russians seriously brush aside the relevance and the role of culture, for that matter aspects of soft power in foreign policy while advocating for this emerging new order. Examining, in broad terms, all aspects of culture that basically includes continuing the struggle for self-determination, for creating the grounded opportunity to live in peace and preserving one’s valuable traditions. Language, of course, plays its unifying role.

Some contradictions and different interpretations might exist. On the other hand, there are divergent views and different perceptions relating to the current geopolitical changes, but frankly speaking the study of foreign languages, including English, Spanish, Portuguese, Arabic, and the emerging interest in the Chinese and Russian languages, has been a long part of people’s lives, especially those who hope to move across borders and dream to have smooth interactions with other nationals from different countries around the world.

For the past three decades since the collapse of the Soviet era, Russian language studies has been low, for example among the African population primarily due to lack of overwhelming interest and adequate motivation, and lack of consistent interactive cultural activities by Russian authorities, experts frequently say, and warmheartedly complain that things are slow with Russia’s return to Africa.

Most Africans prefer to study foreign languages to ensure smooth participation in interstate activities such as trade and in order to maintain relationship with people abroad. Foreign countries, for example Britain, the United States, European countries and now China are their traditional favorites. There are always interactive programmes and cultural activities throughout the year operated by foreign missions and NGOs.

Interpreted from different perspectives, Russia has not been a major economic giant in Africa compared to Western and European countries and China. Due to this historical truth, Africans have little interest in studying Russian language and its culture. The Russian language itself does not sound attractive in terms of its economic opportunity and therefore Africans prefer to study languages that readily offer opportunities. China is making huge contributions in the continent and this has made Africans see the need to understand the language in order to have better interaction with them.

The obvious worse-case scenario is that the Russian government has not created necessary conditions and reasons to study the language simply because it has little influence in the continent. Besides that, the trade and commercial links between Russia and Africa are quite negligible so there is no desperate demand for the Russian language for businessmen. New York, Washington, London and Paris are their second homes. Admittedly, Russia is not even a welcoming holiday destination for African elites and the middle-class which is twice the total population of Russia, and constitutes 40% of 1.3 billion population of Africa. Travel and tourism is an increasingly huge business, the unique geographical landscapes and changing attractiveness of Moscow, St Petersburg and Sochi – these are unknown to the African elites and the growing middle-class.

Russia’s frequent confrontation and anti-Western posture is dangerous as itself has, so far, done little within parameters of socio-cultural diplomacy in Africa. With the current evolving political and cultural processes, the West and Europe will still have a strong classical grip on Africa, influencing everything first from culture and tourism, and moving onward to politics and economics. Perhaps, Russia has to play correct strategic openness and begin to welcome African travellers, tourists and visitors. Closing doors, (steel wall reminiscent of Soviet era] especially in these critical times, might negatively distract Africa’s support for Russia.

The worrying tendency is that Rossotrudnichestvo, an agency under Ministry of Foreign Affairs of the Russian Federation, pays little attention to educational and cultural questions in Africa, compared to its assertive counterparts – USAID, Alliance Française de France, The Goethe Institute, British Council, Instituto Cervantes that operate throughout the world. Another Russian organization – Russkiy Mir Foundation, which is directly responsible for promoting Russian language and culture abroad, does extremely little in sub-Saharan Africa. In addition, cultural officers work in all the 38 Russian embassies in Africa.

Russia appears quite removed from Africa’s development issues, it is only mentioned in limited areas like weapons and military equipment supplies to French-speaking West Africa. Nowadays, China is being viewed as a strong strategic partner in Africa given its (China’s) strong footprints in diverse economic sectors. China has more than 20 Confucius Centers, and a party school in Africa. Western and European, and China support civil society, youth programmes and women’s issues, – these are completely not on the Russia’s radar.

Russia allegedly allows its own ‘cancel culture’ and significantly not by the United States and its European allies. In practical terms, creating a multipolar system deals largely with cultural and social orientation, it deals with public perceptions through openness and friendliness. At this new historical reawakening stage, Russia has to review itself and try to focus on building relations, both with substance, trustful and refined approach, and strive to strategically engage with civil society, youth organizations and non-state institutions in Africa.

By and large, Russia has to intensify its people-to-people connections, the soft power and cultural diplomacy with Africa. There is a huge cultural gap of new thinking, working with young professionals and associations to promote people-to-people [public-outreach] diplomacy through business links, cultural exchanges and competitions. As Russia charts loudly for multipolar system, this has to reflect in its current foreign policy and approach especially towards the developing world, in Latin America, Asia and Africa.

Late October, during the final plenary session of the 19th meeting of the Valdai Discussion Club, the focus was on matters related to the changing geopolitics and civilisation diversity, the new world order and its future developments. Under the theme – “A Post-Hegemonic World: Justice and Security for Everyone” – the four day-long interactive meeting brought academic experts and researchers, politicians, diplomats and economists from Russia and 40 foreign countries.

President Vladimir Putin discussed, at considerable length, so many controversial questions. According to him, classical liberal ideology itself today has changed beyond recognition. Predicted the end of United States global dominance, but fell short in proposing an appropriate Russia’s template – the principles and mechanisms – for realizing the lofty idea and approach to establishing multipolar world.

Putin did not say anything about Russia becoming a global power, but awarded that position to China. Giants like China, India and Indonesia with large population are showing economic growth; in Africa large countries – some of them with a population of 200 million – are emerging and making progress, as well as countries in Latin America.

According to him, Russia still have friends around the world. He mentioned that in Central America and Africa, the Russian flags are flying everywhere. “There are flags in European countries and in the United States too, we have many supporters there. By the way, a large proportion of the US population adhere to traditional values, and they are with us, we know this,” he added in his assertive conversation at the Valdai gathering.

Putin, along the line argued that the support for multipolar order largely exists in the global south. Russia is not the enemy and has never had any evil intentions as regards the European countries and the United States. He appreciated Africa’s struggle for independence and against colonialism. These absolutely unique relations were forged during the years when the Soviet Union and Russia supported African countries in their fight for freedom.

In this context and in relation to Africa, Natalia Zaiser, Founder of the African Business Initiative Union, apparently talked about the new historical stage, need to establish new or different institutions of international partnership.

Her series of questions to Putin: “Mr President, what is your vision of a new international partnership institution? Which basis of parities is Russia ready to offer at the international level? Which mechanisms, tools and personalities are needed to acquire new allies, partners and friends, not at a declarative level but at the level of unquestionable responsibility in terms of agreements? Do you think we should also change or build up other approaches within the future international partnership?”

Putin’s answer was: “We must and we can focus on cooperation, primarily, with countries which have sovereignty in taking fundamental decisions. This is my first point. My second point is that we need to reach a consensus on each of these decisions. Third, we need to secure a balance of interests. As part of which institutions can we do this? Of course, these are primarily universal international organizations, and number one is with the United Nations.”

Kester Kenn Klomegah is an independent researcher and writer on African affairs in the EurAsian region and former Soviet republics.

This article has been read 182 times
COMMENTS