Geopolitical Competition: Why Africa Must be Strategic and Proactive 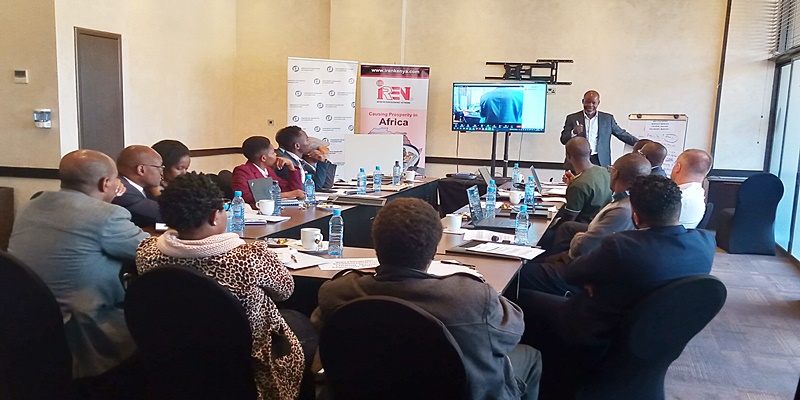 Geopolitical Competition: Why Africa Must be Strategic and Proactive

The ongoing fever-pitch global tension and fear occasioned by competition among major political and economic powers of the world is not new. It dates back to naval wars to control sea trade routes, control global resources and flaunt power.

This was observed by policy makers, academia, lawyers, political analysts, business and Foundations during the 20th IREN Africa Resource Bank Forum that was held in Nairobi on 14th December 2022. The forum themed: “A New Game? Situating Africa in Strategic Geopolitical Competition;” was co-sponsored by The Friedrich Naumann Foundation - a German political Foundation.

Geopolitical competition in Africa is as old as the continent. Global powers have competed to tailor Africa’s social, cultural, political, and economic landscape in an effort to secure their geopolitical interests. The Scramble for Africa, which took place between the years 1881 and 1914, represents the single most consequential illustration of geopolitical competition playing out within the African continent. The process, which culminated in the rapid invasion, annexation, partitioning, and colonisation of most of Africa by Western European powers, inspired African states to appreciate the need for strategic geographical alliances to stand up to exploitation and further their shared interests. The Cold War era (1947 – 1989) also saw the Union of Social Soviet Socialist Republics (U.S.S.R) and the United States fiercely compete for geopolitical influence across Africa in the wake of the conclusion of World War II.

The participants noted that the unipolar World is fast receding as liberalism and Western hegemony comes under increased scrutiny for failure to guarantee delivery of good socio-political and economic outcomes. Further, global upheavals caused by the COVID-19 pandemic; climate change; democratization of access to information by use of digital technology and the raw narrative wars by big powers place Africa in a precarious position.

Consequently, there is a litany of geographic alliances across Africa formed specifically to shore up nation states’ bargaining power and standing within the international community even as China, Russia, the United States, Europe, and Gulf states seek to strengthen their influence across the region.

The just concluded 20th IREN Africa Resource Bank Forum resolved that no new game is at play, rather, new players are actively displacing old ones on the African scene.

A contest between new players whose activities range from investments, trade, finance, technology, and education and display of power are rapidly gaining ground against the 500-year-old West’s grip on Africa. The short run impact of this contest on Africa is disruption of supply chains, inflation, turmoil in financial markets, energy crises, food insecurity, reversal on skills gains and ultimately socio-political tensions.

Participants observed that due to inherent fear of displacement by new actors in the arena of big power politics, Africa has become a battlefield of clashing systems.

The forum participants proposed a number of measures that Africa should take in the ongoing geopolitical contest.

To begin with, it is urgent that African leaders, intellectuals and academia, take time to reflect and develop a position from which Africa can navigate the ongoing strategic geopolitical competitions. A joint foreign relations strategy that draws from Africa’s experience in history and an eye on Africa’s own interests should be of the continent’s top priority.

Second, it is important that Africa crafts a strategy to convert the rational fear by global powers into a geopolitical advantage for the continent. Uganda, for example, is strategically using the refugee crisis to leverage its bargaining position globally.

Third, Africa ought to use its natural resource ability, intellectual resource, and multiple players courting the continent as a bargaining tool for a win-win deal for Africa. The question should be, who has better strategic offers that address Africa’s long term interests? Africa should not rely on single partners. In the ongoing predator-victim contest, Africa must strategically avoid being the victim.

Fourth, it is crucial that Africa takes its agency to another level, stop thinking along colonial formations and pursue its agenda 2063 roadmap.

Fifth, Africa must learn from history to comprehend what makes the big powers tick. Whether it is a mixture of bandwagoning, neutrality, power balancing or hedging, Africa must choose a strategy that works for it.

Sixth, nearly 80% of global trade and transactions is dominated in United States of America dollars. Due to sanctions occasioned by the Russia-Ukraine war, many nations are rethinking the use of the dollar. The dollar’s   share is currently falling gradually as evolution of markets and technology weaken its market share in global payments. Can Africa cash in on the rise of central bank digital currencies, cryptocurrencies, and other innovations to shore up an African currency?

Seventh, Africa should capacity build and position its bulging population projected to be 2.5 billion by 2050 to be strategic players in the comity of nations.

Eighth, Africa should not isolate itself from the world. However, it should look inward, enhance intra-Africa trade, and strengthen the “morning economy” that draws inspiration from Africa’s production rhythm and culture to proactively plug into global markets.

This article has been read 491 times
COMMENTS