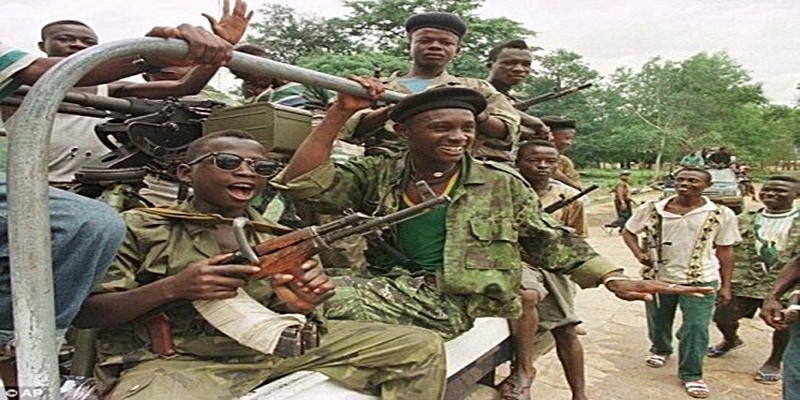 “Those who do not remember the past are condemned to repeat it” – George Santayana, Spanish-American philosopher

January 6, 1999!! On January 6, 2023, we would commemorate the 23rd year of January 6, 1999 – the day when soldiers of the Sierra Leone military that had successfully staged a coup on ​May 25, 1997 against the 1996-democratically-elected government of President Tejan Kabbah (SLPP leader), and called themselves the “Armed Forces Revolutionary Council (AFRC)”, and when kicked from power by Nigerian-led multinational force, ECOMOG, in February, 1998,  mutated into being  blood-thirsty murderous rebels, that  bonded  with the Revolutionary United Front (RUF) rebels that had waged an almost ten year’s scorch earth tactics of wanton murder, amputation, rape, arson by drug-induced child and teenage combatants … to take over the capital city of Freetown.

It was a reign of terror that you would almost physically touch, and through the video camera of Sierra Leonean filmmaker, Sorious Samura, that horror was shown in is gruesome details on CNN, in the video documentary “CRY FREETOWN”.

On January 6, 1999, and several weeks after in the crammed mountainous Freetown Peninsular, the AFRC/RUF murdered people inside churches and mosques and in their homes; amputated babies and infants, men and women and youth; burned down public and private buildings. Corpses of their victims were stacked outside the main Connaught Hospital in Freetown.  Vultures hovered; feasted on fresh corpses; pecked at bloated, rotting and stinking corpses.

It was the sum of the worst nightmares of a civil war which had been ignited in the far east district of Kailuhun, from where the RUF rebels had entered Sierra Leone on March 23, 1991, with the support of another rebel group, Charles Taylor’s National Patriotic Front of Liberia (NPFL).

The youth group I am the brain of and cofounder for in 2000, and was like ‘CEO’ of between 2000 and 2006, Youth Arise, would almost always go on radio and television to commemorate January 6, 1999, which other citizens, and even governments, appear only too willing to forget.  How did we get to the hellish January 6? Have Sierra Leoneans learned the lessons of January 6 to make sure we never re-enact January 6? No!!

At the core of our collective amnesia are the two political parties that have largely governed Sierra Leone since Independence from Britain in 1961, the Sierra Leone People’s Party (SLPP) and the All People’s Congress (APC); either would effect “state capture” after gaining power through democratic elections. They would capture Parliament and make laws that largely benefit about 1% of the privileged elite.

They would capture the judiciary, and make Justice a travesty; a mockery.  They would capture nearly all revenue arms of government, and institutionalize public stealing of government funds by the political and bureaucratic elite. They would sell Sierra Leone’s vast mineral and fisheries resources to foreign companies for cheap – as long as they are enriched through some of the crumbs these foreign companies throw at them, they would be unperturbed as the masses groan with their worsening poverty. They would capture revenue arms of government like the National Revenue Authority (NRA) and Sierra Leone Roads Authority and operate them in secrecy, and an apparently emasculated Parliament, or, ‘bought Parliament’, would bond with the executive not to do oversight of government agencies, but, to ensure that they get their own cut of funds looted from the state.

They would squander government’s money in infrastructural projects like roads and bridges and airport terminals, and point these out to the masses as samples of “development” – but, every five years, as the people grew fiercer in the ethnic war that masquerades as competitive democratic politics, the people would grow poorer and poorer; and only about 1% of the governing elite of either of the SLPP or the APC would get stinking rich with money stolen from government.

Every five years in the sham of democratic elections, there would be ‘liberators’ of either the SLPP and APC, and the masses inflicted with what I have diagnosed as “COLLECTIVE MADNESS” would frenziedly and blindly vote either the SLPP and APC into power – with the Mende-speaking people Southeast made to believe that they would win the intrinsic civil war against the Temne-speaking Northwest people when they vote the SLPP into power. And, the Northwest people made to believe the same about the APC. Once in power, the hierarchy of both the SLPP and APC would focus largely on stealing state money – to build houses; to educate their children in Europe and the United States; to siphon money into their accounts in foreign banks. Is this charade sustainable?

Decade-after-decade of slash-and-burn farming as Sierra Leone has experienced one of the fastest population growth rate in the world after the civil war ended has meant that most of the agricultural lands of our country have become largely sterile. This sterility of the soils has been compounded by irreparable and irreversible damage done to the ecosystems by large scale mineral exploitation companies; and, intensely so recently, commercial logging companies.

As the soils produce even less and less for subsistence living, the youth are fleeing the rural areas in droves.  They cram urban centers like Freetown, Bo, Kenema, Makeni, Koidu.  To do what?  To cram in slums and eke their living under the sweltering heat and enervating humidity on the streets of Freetown about ten degrees North of the equator - as petty traders; okada and keke riders; as literally, prostitutes.

Since the 1970s, there have been a dramatic plummeting of educational standards at all levels of our educational system.  Whatever little investment that was made, or, stimulated, by government to establish industries in our cities in the 1960s were devastated during the war years, and have hardly been restored after the end of the war.  In the cities, we have build a consumer people dependant on imports.  We are like rats consuming the present and the future.

Sierra Leone is a Ticking Time Bomb of youth of employable age who are unemployed – about 70% of the youth population.  Or, youth under-employed; or mis-employed.  With a scandalously lazy and predatory public sector, they are largely incapable of gingering the private sector into productivity mode. And, they are selfish. And reckless. As the living standards of the potentially volatile youth crimp every five years, either the SLPP or APC would posit themselves as liberators that would be the elixirs for all the woes of the youth.  After five or ten years, the youth would see their liberator was a mirage.  And, they get angrier.  Whatever ‘development’ the two political parties would claim to forge, it would not be proportionate to the magnitude and urgency of the youth and children challenge.  I think the governing elite know this.  They just want to defer the next explosion – the next “January 6”.

Are there any deep-thinking citizenry who would read this and be galvanized into positive action to overhaul the entire governance systems of Sierra Leone; dramatically concoct a change of attitude? There could be.

If Sierra Leone’s enlightened minority would shore up their courage to burst the bubble of Orwellian Lies they have allowed the SLPP and APC elite to entrap them in.  The Big Lies that once they elect a president that president becomes God, almost literally.  The Big Lie that the primary purpose of education is to secure government jobs, and steal as much money as one can; and continue fooling the masses that you fight for their tribal interests. The Big Lie that when the shit hits the fan – as it did especially between 1994 and 2000 – the white man in Europe and the United States would rush in to save Sierra Leoneans. Entrapped in this bubble of Big Lies, the governing elite are ignoring, or, belying, the biggest threat to Sierra Leone, Africa, indeed, all humanity that I have been screaming about: man-made Climate Change. Credible scientists and political and economic analysts are warning that if man-made Climate Change is not dramatically and radically checked, it could lead to the collapse of human civilization. The sheer anarchy of January 6, 1999 was the collapse of civilization that Sierra Leoneans should let the world know about so they can take the warnings of scientists more seriously.  January 6 commemoration is an implicit scream by the majority children and youth population that everything must radically or dramatically change in our country. Can the President, Retired Brigadier Maada Bio, catalyze that necessary change - or, ignore the warning signs of August 10,2022, and pave the way for another "January 6"?

Founder and CEO of the SLAVE SHIP-FREEDOM SHIP

This article has been read 111 times
COMMENTS