The World’s Most (and Least) Powerful Passports in 2023 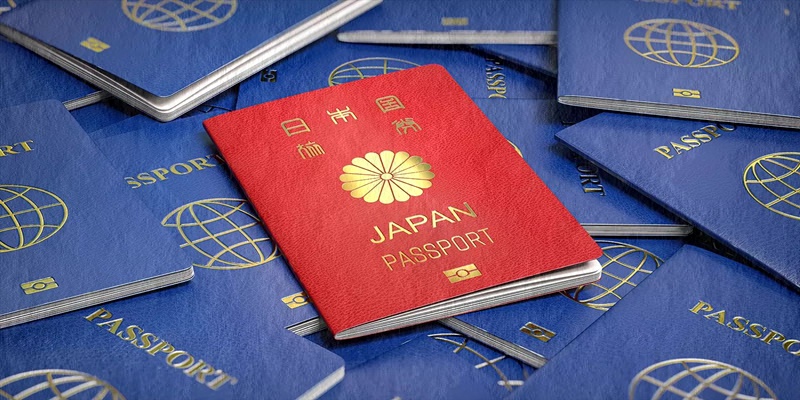 The latest results from the Henley Passport Index provide fascinating insights into a world characterized by extraordinary upheaval and offer a revealing look at what lies ahead. For the fifth year running, Japan crowns the Henley Passport Index, which is based on exclusive and official data from the International Air Transport Association (IATA). It is the original ranking of all the world’s passports according to the number of destinations their holders can access without a prior visa. Japanese citizens are now able to visit an astonishing 193 destinations out of 227 around the world visa-free, while South Koreans and Singaporeans, whose countries are tied in 2nd place on the index, enjoy a visa-free/visa-on-arrival score of 192. Germany and Spain are joint 3rd, with visa-free access to 190 destinations worldwide. The UK and the US remain in 6th and 7th places, with scores of 187 and 186, respectively, and it appears increasingly unlikely that either country will ever regain the top spot on the index which they jointly held nearly a decade ago in 2014.

With global travel now at around 75% of pre-pandemic levels, those with the opportunity to do so appear to be embracing what has been termed ‘revenge travel’. But deeper analysis of the index reveals the darker side to this optimistic picture. Afghanistan remains firmly at the bottom of the index, with a score of just 27 — 166 fewer visa-free destinations than Japan, which represents the widest global mobility gap in the index’s 18-year history. As indicated by exclusive new research conducted by leading residence and citizenship advisory firm Henley & Partners into the link between passport strength and access to the global economy, citizens of the index’s lowest-ranking countries such as Afghanistan, Iraq (visa-free score of 29), and Syria (visa-free score of 30) are effectively shut out of a shockingly wide breadth of opportunities for economic mobility and growth.

Chairman of Henley & Partners, Dr. Christian H. Kaelin, who invented the passport index concept nearly 20 years ago, says that this latest, eye-opening study enhances our understanding of what passport power means in concrete financial terms. “The Henley Passport Index measures visa-free access to 227 destinations across the world, which of course makes it an extremely useful tool for travelers. However, for global citizens and international businesspeople, a better measure of economic mobility and opportunity afforded by their passports is an indication of what share of the world’s GDP is accessible to them visa-free. Our latest research into how much global economic access each passport provides is a useful tool for investors, in addition to giving new insight into the ever-widening economic inequality and wealth disparity that has come to define our world.”

By combining Henley Passport Index data and World Bank GDP data, the new research ranks all 199 passports in the world in terms of their Henley Passport Power (HPP) score, a term that indicates the percentage of global GDP each passport provides to its holders’ visa-free. Take the Japanese passport, for instance, that gives visa-free access to 193 destinations (85% of the world). Collectively, these countries account for a whopping 98% of the global economy (with Japan’s own GDP contribution being around 5%). To contrast this figure with a passport from the lower end of the spectrum, Nigerian passport holders can access only 46 destinations visa-free (20% of the world), with these countries accounting for just 1.5% of global GDP. At the bottom of the ranking, the Afghanistan passport provides visa-free access to just 12% of the world and less than 1% of global economic output.

Commenting in the Henley Global Mobility Report 2023 Q1, launched alongside the 2023 Henley Passport Index, financial writer and global investment expert Jeff D. Opdyke says although we don’t often think of our passports in a financial sense, they are a gateway to fiscal opportunity. “A stronger passport isn’t just about greater freedom of movement: it’s about greater financial freedoms in terms of investing and entrepreneurial opportunities.”

Dr. Areef Suleman, Director of Economic Research and Statistics at the Islamic Development Bank Institute, agrees and points out that cross-country visa-free access to more stable economies helps investors mitigate country- or jurisdiction-specific risks. “In general, greater access to the world’s economic output is advantageous as it expands the basket of products available to any individual. While this is also attainable through international trade, the options available with physical access are far greater, extending to the use of services that are non-exportable such as better-quality education and healthcare.

Prof. Trevor Williams, former chief economist at Lloyd’s Bank Commercial Banking, says the research proves the causal relationship between the ability to travel, foreign investment in a country, increased trade, and economic growth. “The analysis shows predictive power flowing from the Henley Passport Index and Henley Passport Power to economic growth. Moreover, these links are mutually reinforcing and agglomerative. Skills and talent go where there is the ability to work, invest, and travel, attracting others wishing to do the same and creating a positive loop.”

Leading global strategist and member of the Henley & Partners Advisory Board, Dr. Parag Khanna, says countries are once again embracing the geopolitical adage that collecting people is collecting power, after almost three years of stagnation. “International travel is surging to record levels, dozens of countries have launched nomad visa or golden visa schemes, and relocations are surging to take advantage of remote work opportunities, settle in friendly tax regimes, or adapt to the impact of climate change on property markets.”

A good example of this is the UAE, which has climbed an astonishing 49 places over the past 10 years. Ranking 64th at the end of 2012, with a visa-free score of just 72, the UAE now sits in 15th place, with a score of 178 and access to nearly 70% of global GDP. By contrast, The Gambia is the biggest faller on the index over the past decade. Ironically, it ranked immediately above the UAE at the end of 2012, in 63rd place, but while the UAE passport has soared, The Gambia’s has followed a radically different trajectory. It currently sits in 77th place, having fallen 14 spots over 10 years, with a score of just 69 and access to only 5% of the world’s economic output. Most of the countries that have fallen sharply over the preceding decade have been afflicted by conflict and economic crises — Yemen, Syria, Sierra Leone, and Mali among them — a bleak illustration of the proven link between passport power and financial stability.

Looking ahead to other potential future success stories in 2023, analysts anticipate that Kuwait and Qatar will sign a visa-free deal with the EU this year — a move that will dramatically enhance both countries’ Henley Passport Index scores, as their passport holders will be granted visa-free access to all 27 EU member states. While Asian countries still dominate the very top of the index, the growing passport strength of Gulf countries has been identified as a key trend in the coming year. Commenting in the Henley Global Mobility Report 2023 Q1, senior resident scholar at the Arab Gulf States Institute in Washington, Dr. Robert Mogielnicki, says they are “poised for strong and much improved economic performances. Qatar’s hosting of the 2022 FIFA World Cup provided an unparalleled opportunity to market the small Gulf country to a global audience and the World Bank anticipates Kuwait’s growth to accelerate to 8.5% alongside a strong performance in the non-oil sectors.”

The war in Ukraine: shockwaves continue

The Ukraine war is yet to have a significant impact on the Henley Passport Index scores of Russia and Ukraine, with both countries retaining roughly the same position “on paper” since the invasion began. Russia is currently ranked 49th with a score of 118, while Ukraine sits 13 places above, ranking 36th with a score of 144. However, due to airspace closures and sanctions, Russian citizens are effectively barred from traveling throughout most of the developed world, with the marked exceptions of Dubai and Istanbul, which have become focal points.

Ukrainians, on the other hand, have been granted the right to live and work in the EU for up to three years under an emergency plan in response to what has become Europe’s biggest refugee crisis this century. Already one of the biggest climbers on the Henley Passport Index, moving up 24 places over the past decade, Ukraine would likely break into the Top Ten most powerful passports in the world if it were to join the EU. Negotiations for membership are due to begin in earnest in the next few months after the EU approved Ukraine’s application for EU candidate status in record time last June.

Commenting in the Henley Global Mobility Report 2023 Q1, leading financial journalist and author, Misha Glenny, says it’s hard to overestimate how the continuing conflict will dictate global politics and the economy throughout 2023. “Ukrainian territory under Russian occupation amounts to roughly 0.02% of the globe’s landmass. Yet this conflict has profoundly affected almost every country in the world. This is not a repeat of the Cold War, which was characterized by stable relations between the West and the Soviet Union, who instead engaged in proxy wars mainly in East Asia and Africa. The Russo–Ukrainian war is a brutal ground war in which one combatant possesses more nuclear warheads than any other country on the planet. Furthermore, the Russian and Ukrainian economies exert a huge influence over two vital sectors of the global economy — energy and agriculture. This has been reflected in steep price rises, turning a manageable inflationary struggle into a dangerous one.”

As they have done throughout the index’s 18-year history, countries with residence and citizenship by investment programs fare very well on the 2023 ranking. Malta, for instance, sits in 8th place, with a score of 185, while Caribbean states such as St. Kitts and Nevis and St. Lucia have performed strongly, sitting in 26th and 33rd place, with scores of 157 and 147, respectively.

Dr. Juerg Steffen, CEO of Henley & Partners, points out that “in a highly unpredictable and volatile world, economic mobility and cross-country visa-free access to more stable economies helps investors mitigate risk and secure additional income streams.” For instance, Dr. Steffen notes that if an investor acquires a St. Kitts and Nevis passport through the country’s citizenship by investment program, they secure the rights and benefits that come with being a citizen of that country as well as the considerable advantage of visa-free access to nearly 40% of global GDP. “In the case of Malta, its investment migration offering provides access to over 80% of the world visa-free as well as nearly 70% of global GDP. For investors from countries with poor visa-free access, the global mobility and economic advantages and opportunities associated with acquiring a more powerful passport are indisputable.”

This article has been read 140 times
COMMENTS