Russia and Africa: Who is Courting Whom? 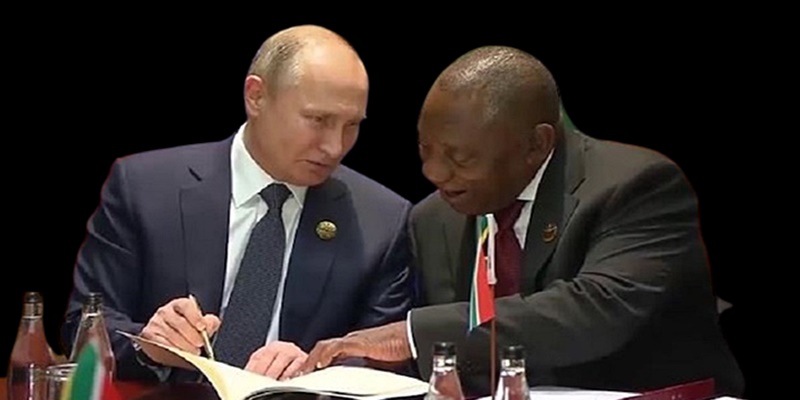 The South African Institute of International Affairs has put into circulation its latest policy report on Russia-African relations. In the introductory chapter, Steven Gruzd, Samuel Ramani and Cayley Clifford - have summarized various aspects of the developments between between Russia and Africa over the past few years and finally questioned the impact of Russia's policy on Africa.

According to Steven Gruzd, Samuel Ramani and Cayley Clifford, this special far-reaching policy report includes academic research from leading Russian, African and international scholars. It addresses the dimensions of Russian power projection in Africa, new frontiers of Russian influence and provides a roadmap towards understanding how Russia is perceived in Africa.

It highlights narratives about anti-colonialism and describes how these sources of solidarity are transmitted by Russian elites to their African public. For seeking long-term influence, Russian elites have oftentimes used elements of anti-colonialism as part of the current policy to control the perceptions of Africans and primarily as new tactics for power projection in Africa.

The reports delved into the historical fact that after the collapse of the Soviet era, already more than three decades, Russia is resurgent in Africa. While Russia has been struggling to make inroads into Africa these years, the only symbolic event was the first Russia-Africa Summit held in Sochi, which fêted heads of state from 43 African countries and showcased Moscow's great power ambitions.

Moscow has signed bilateral agreements to participate in various economic directions with many African countries. It has also signed military-technical agreements with over 20 African countries and has secured lucrative mining and nuclear energy contracts on the continent. Russia exports more arms to Africa than the United States, France and China combined. It uses private military contractors.

While it has made thousands of promises and signed bilateral agreements, Russia is largely invisible in economic sectors, keeps a remote distance from participating in building critical infrastructures and investing in industrial spheres. Moscow simply builds relations on illusions and lacks the capacity and overwhelming power to realize its policy goals in Africa. During critical times of coronavirus pandemic, Moscow terribly failed to supply 300 million Sputnik V vaccines through the African Union.

Russia's expanding influence in Africa are compelling, but a closer examination further reveals a murkier picture. Despite Putin's lofty trade targets, Russia's trade with Africa stands at just $20 billion, which is lower than that of India or Turkey.

The report authors said that the renewed attention by Russia to Africa presents both risks and opportunities for the continent, especially in this changing geopolitical situation. But the key question arises: Who is courting whom?

The report points to the fact that African countries have engaged with Russia in a 'business-as-usual fashion' and have either refrained from condemning Russia's aggression or from expressing explicit solidarity with Ukraine. Nevertheless, over half of all African states sided with the West in condemning Russia's aggression against Ukraine in UN General Assembly votes in March and October 2022.

Russia's major breakthroughs on the continent are confined to its support for fragile states, such as Mali, or autocracies, such as Cameroon, as major regional powers are reluctant to convert rhetorical cooperation into multidimensional partnerships.

The authors further wrote that "Russia's growing assertiveness in Africa is a driver of instability and that its approach to governance encourages pernicious practices, such as kleptocracy and autocracy promotion, and the dearth of scholarship on Moscow's post-1991 activities in Africa is striking."

Records further show that Russia indeed kept a low profile for two decades after the Soviet collapse. One particularly problematic assumption is that Russia's resurgence in Africa is a relatively recent phenomenon, which took hold at the tail end of Putin's second term from 2004 to 2008 and accelerated after Russia-West relations soured over the 2014 Ukraine crisis and Russia's annexation of Crimea.

Now Russia's main tactics to expand its influence, such as debt forgiveness, arms contracts to fragile states and resistance to US unilateralism, come from its transition-era playbook and are not simply throwbacks to its Soviet-era superpower status. These continuities and forces that have shaped them are largely ignored in Western accounts and deserve granular attention.

In addition, Russia has used social media, state media and 'political technologists' to create distorted narratives of Russian largesse and to erode public support for Western involvement in Africa. At times, image triumphs over reality, as Russian narratives are more appealing than its actions. It is clear that Moscow's approach to Africa is customised and is not a mere extrapolation from Putin's global approach to foreign policy.

Moreover, the limited amplification of African voices causes sub-Saharan Africa to be viewed as a passive pawn of Russian power projection and neglects the perspectives of African civil society and the historical legacies that drive elites to court the Kremlin. Africa's agency is thus discounted and diminished.

On the other hand, Russian public diplomacy in Africa explores the targeted use of historical ties, existing anti-Western narratives, state-centric approach and educational programmes to enhance Moscow's 'soft power' on the continent.

In Southern Africa, a pattern of 'differentiated courtship' emerges clearly. By bridging Southern and Eastern Africa, its tactics include debt-for-development, nuclear energy, military and paramilitary cooperation, disinformation campaigns and election interference and sponsorship of political parties.

Further in the Horn of Africa, Russia's tactics for influence projections span from participating in anti-piracy missions to vaccine diplomacy.

The war in Ukraine has elevated the level of scrutiny of Russia's actions both in Europe and elsewhere in the world, including in Africa. Undeniably, Moscow is wooing African elites to serve its interests, African states are trying to play off Moscow, Washington, Brussels and Beijing for maximum advantage. While many complexities and nuances still remain in the entire relationships, it necessary not to over-generalize the unique features in the bilateral ties.

In the context of a multipolar geopolitical order, Russia's image of cooperation could be seen as highly enticing, but it is also based on illusions. Better still, Russia's posture is a clash between illusions and reality. "Russia, it appears, is a neo-colonial power dressed in anti-colonial clothes," says the report.

The second Russia-Africa Summit – if it indeed goes ahead in July 2023 – will provide an ideal opportunity to reflect on progress since the inaugural gathering in 2019, and attempt to separate bluster from the concrete facts on the ground. But, 'who is courting whom' in the current relations between Africa and Russia.

The author writes frequently about Russia, Africa and the BRICS

This article has been read 131 times
COMMENTS