Gaining from the 2007 General Elections

As the year 2006 comes to an end and we usher in the year 2007 many investors are looking back and giving a sigh of relief for the rough ride they have encountered in the stock markets. 2006 has seen a wave of investor enthusiasm with a record high of six IPOs and share splits in the Nairobi Stock Exchange (NSE). The New Year brings with it a new frontier of uncertainties in the securities market.

The looming general election in Kenya and the possibility of another constitution referendum cannot escape investors’ minds. As much as they wish to celebrate a new beginning and the anticipated IPOs from Kenya Re to Safaricom, at the back of every investors mind is a dark cloud of uncertainty as to what the election frenzy will bring to the bourse.

Change and uncertainty are two words that make the stock market and investors very nervous. However, this is what the 2007 general election will bring. It is not good news for the NSE. Looking at the trend of the NSE 20 share index since the introduction of the multi-party system in 1992, it’s evident that if investors anticipate the government to change hands, the volume of trading reduces and the prices drop. 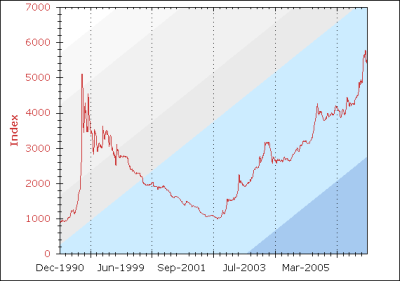 From the graph, the NSE index had lowest troughs in 1992 and the end of 2002 when Kenya experienced a political wave that was characterized by a great anticipation of power changing hands.

Presidential elections which occur after every five years have a profound impact on the stock market. Bear markets tend to occur in the last year of the term while bull markets occur two or three years after the elections. Investors assume that elections will always adversely affect the bourse causing their returns to decline or even incur huge losses. Thus the periods just before a stormy election are associated with a bear securities market. Everyone is selling, causing supply to exceed demand and share prices to drop.

Like all aspects of market forecasting, election-year punditry is more art than science. Investors should not rush out and reshuffle their portfolios based on political polls. It's better to have a consistent investment plan and stick to it no matter who is in power. For an investor to survive the election frenzy, a good strategic plan that considers both long tern and short term factors such as elections, interest rates, inflation and the general performance of the economy should be put in place.

Further more, with the cross border listing of companies in the Uganda Securities Exchange (USE) and the Dar es Salaam Stock Exchange (DSE), one can buy stocks in neighbouring countries since they are not going to be affected with the elections in Kenya. Think about the on going Stanbic Uganda IPO which many Kenyans are participating in. The bank has very good prospects and its shares are sold at a very low price. Investing in such a company gives you an insurance against the anticipated bear market next year.

Consider a long term investor who invested heavily in the NSE in 2002 when most share prices were at their lowest or going down. At the moment, with the stocks market at its peak, he is reaping good returns for his timely decision not to sell at that moment when most short term investors were. Assuming that the bourse will follow this similar trend over the next year, it would be very apt for one not to move out of the market but move in when most investors will be moving out in 2007.

Politics or who's in charge is not a big deal in investment decisions. Governments are more victims of their economies than they are drivers of it. That's why there's no real relationship between which party is in control and stock markets market returns. The most important factors are interest rates and fiscal stimulus coming from the private economy. The stock market is driven by free markets, business events and big investors, who set long-term interest rates.

I concur with Peter Lynch, a successful Wall Street stock investor, when he said that when the market's are going down and you buy wisely, at some point in the future, you will be happy. You won't get there by reading ‘now is the time to buy.’

This article has been read 1,650 times
COMMENTS