Why have Africans, especially those in Sub Saharan Africa failed to limit the power of their governments?

Data from the World Bank and the 2006 Economic Freedom of the World report (EFW) show an indisputably positive correlation between economic freedom (measured in terms of the extent of government intervention) and economic growth. The more limited a government is in economic activity, the freer the market, the higher the rate of economic growth and the more prosperous the citizens.

It is no longer open to informed debate. Freedom, especially economic freedom, is an absolute prerequisite to economic growth. Growth in turn is good for everybody and everything, from infant mortality to literacy, pollution and even the “human happiness” index. It necessarily follows therefore, that limiting the power, influence and size of government, is critical to economic growth and prosperity. This incontrovertible fact is further illustrated by the graphs below which were drawn from the 2006 EFW report and demonstrate that the highest rates of growth are achieved by the freest economies. 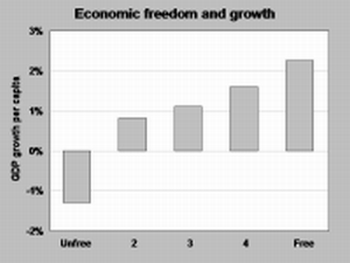 In many parts of the world, Asia and Latin America included, the majority of people believe that they must rely on government to provide their economic freedom.  In Africa however, this misconception of the role of the state seems particularly pronounced. It does not mean that black Africans do not understand what freedom is or indeed that they are somehow “different” from other groups of people. All it means is that for numerous reasons, the most important of which I set out below, black Africans have been more exposed to this kind of perverse thinking than most others.

From the outset allow me to dispel the myth so often purveyed by African leaders that their people are somehow “different”, implying that they deserve some special treatment due to colonialism, racism, slavery, or similar long-past event. African politicians simply love to use these historical issues as excuses for their present day failures and for perpetuating their power. This is where the initial confusion regarding freedom in Africa begins. African countries were not the only ones colonised and there is no proven link between colonisation and economic failure. On the contrary, the opposite has often been true. Moreover, there is today overwhelming evidence that Africans, once exposed to true personal and economic liberty, prosper like every other society.

The message is clear in the new Africa - the size of the ruling party, army, police, government bureaucracy and the personality of the President (often called the “Big man”) is no longer important. What is important is high economic growth for which the best medicine is less government and fewer politicians. The duty of every African government today therefore is to enable, foster and facilitate the liberalisation of their economies.

Why then is there this apparently intractable difficulty in overcoming barriers to limiting government in Africa? The following factors have much to do it:

The effects (which further reinforce in a vicious cycle the causes stated above) of the failure to limit government are:

At independence most African countries inherited and adopted the Westminster style of government, which meant there was no constitution, no flexibility to allow for devolution of power or federalism, and no bill of rights among others. This one man, one vote (often once only!), “winner takes all” system is totally unsuited for the plural and diverse societies that colonial powers grouped together during the “scramble for Africa” – the demarcation of African borders. This is a political system that inherently does not limit government. The characteristics of the system, coupled with the fact that on handing over, no process was undertaken to specifically induct the new administrators in governance, was a perfect recipe for disaster. Often, the hand-overs were performed over night. There were no processes to make the population conscious of their duties and rights. (This process has taken many decades in the western world). In addition, most of the skilled colonial manpower left these countries soon after independence. This meant that Africans were utterly ill equipped to deal with the challenges that lay ahead. The Colonial administrations themselves had had essentially unlimited powers, thus setting extremely poor examples of how to govern. What is more, they had drawn borders and “clubbed” together into single countries friends and foes alike as it suited them.

The first problem is therefore one that Africans themselves are responsible for perpetuating a system of government that is entirely unsuitable for their needs. Ironically, they have perpetuated what they thought they were being liberated from. They defined their problem as “foreign rule” rather than “lack of liberty”. The “liberation movements” focussed on overthrowing colonial regimes without much thought for the philosophy of freedom and what would happen after ‘liberation’. But that is the past. There is no use crying over spilt milk now.

Another barrier to limiting government arose out of the so-called liberation struggles and the fact that in many African countries, wars were fought to gain political independence. These struggles were seen as the beginning of the “struggle for freedom” in Africa, what I refer to as the “struggle psyche”. I refer to the wars as “so-called liberation struggles” because the irony is that in many instances not much “liberation” was subsequently forthcoming! Governments that were formed from the independence or liberation movements were seen (with much emotional attachment) as the providers of freedom from oppression. Once in power however, the liberation movements, which transformed themselves into political parties, “twisted freedom” into a perverse form of “freedom” for the elite few in power and into a source of oppression for the vast majority of their population who became poorer and poorer. In many cases, rather than turn a new leaf, the new administrators copied the colonial administrators exactly and intolerance became the norm for governance. Many created one-party states, another foundation for disaster, and “government” became the structure for centralising economies with the allocation of national resources in the hands of bureaucrats and party loyalists. They then planted the idea in the minds of their people that only they (the party) were a source of freedom, knowledge and power.

Liberation came, in a very narrow political sense and even that tended to be short-lived. Political freedom was achieved by “command” structures and there was an assumption that the same structures could deliver economic freedom. One-party states created barriers to limiting governments as it eliminated competition and opposition and set the scene for complacency and decay.

These flawed ideas of “freedom” were further inculcated by the communist “command” ideology which permeated Africa’s liberation movements via the military support they received from the Soviet Union and China, thus sealing the fate of many Africans as they preached that one “big” government (and party) would solve all the people’s problems. The ideology of communism of course emphasises the redistribution of the economy, “the cake” rather than creation or growth of the cake as it expounds the destruction of the rich in the name of “equalisation of all men”, so the focus of the new governments was on stripping the “haves” of what they had and distributing it to the “have-nots” and not on growing the economy for the benefit of consumers. This meant governments had to have more power and influence, thus becoming a great barrier in limiting government. In Africa, as elsewhere in the communist world, the have-nots did not become haves, but had even less as the economies shrunk or grew marginally. People were taught this ideology and they believed it as a man’s survival became based on loyalty to the party. Communism is a simple and attractive-sounding ideal. We know today that it does not work, but that assumes you are informed enough to understand the choices and know the differences between economic systems.  In the 1960’s, when most African countries achieved their independence, communism had not yet been thoroughly discredited as it is today. It taught “big brother” centralised control and thus became a further barrier to limiting government as different ideas were not tolerated. Those who opposed the status quo were marginalised or eliminated.

This article has been read 2,346 times
COMMENTS