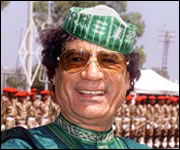 Colonel Muammar Gadaffi jetted into Uganda on Sunday, 15th March 2008, to a warm welcome from the president and the people of Uganda, with all the pomp and ceremony befitting a head of state, colonel, brother and friend of Uganda.  Col. Gadaffi is in Uganda for a four-day official visit that will see him officiate at the closing ceremony for the week long Afro-Arab Youth Conference that has been taking place in Kampala and officially opening the Old Kampala Mosque, the building of which he funded.

This is not the first visit that Col. Gadaffi makes to Uganda and it suffices to say, all his visits to Uganda are a sign of friendship with the people of Uganda.  A friendship by nature is a symbiotic relationship in which there is mutual benefit.  The benefits that Uganda gets from the visits of Col. Gadaffi are numerous.

Col. Gadaffi is perhaps one of the most committed and genuinely active Pan-Africanists.  He is genuinely fighting for a united Africa and this makes economic sense, if you think of economies of scale.  If Africa were to unite, we would have strength in numbers – our negotiation powers with the rest of the world would be strengthened and we would have created a large market that would be attractive for investors.  In the long term, therefore, Col Gadaffi’s visit to Uganda could be of greater benefit to Uganda if he uses it and succeeds in convincing Kampala to join the school of thought for a united Africa.  Uganda is a small landlocked country that needs other African countries for it to develop.  The impact on Uganda of the recent chaos in Kenya illustrates this point.

Slightly over a week ago, International Women’s Day was celebrated on 8th March.  As usual, President Museveni, officiated at the official celebrations in Uganda that were held at Kololo.  There were also other district level celebrations at which mostly the male Resident District Commissioners (RDCs) officiated.  In some cases, allegedly, the male RDCs physically restrained women representatives from officiating at these ceremonies.  There were of course loads of speeches made, with a lot of blah, blah, blah about women empowerment.  The theme for this year’s women’s day celebrations was “The role of women in transforming societies to achieve political, economic and social development”.  Col. Gadaffi’s visit comes with welcome fresh air of women empowerment in action.  Col. Gadaffi’s inner security detail is manned by women.  Indeed, there are very few, if not no other heads of state other than Gadaffi whose security detail is manned by women.  Kampala could learn something from Col. Gadaffi’s pro-women policies and the women of Kampala can draw inspiration from the women who are ensuring Col. Gadaffi’s safety.

Old Kampala Mosque is a truly magnificent complex that commands presence and has added to the aesthetic value of Old Kampala.  Col. Gadaffi did not only provide the funding, he ensured that the best human resource and materials were imported in to Uganda to ensure that the job was well done.  Old Kampala Mosque is no ordinary worship house.  It is amongst the largest in Africa and comes with a complex of conference halls, study centres, shops, etc.  Col. Gadaffi’s current visit to Uganda will see him personally officially open this complex.  Col. Gadaffi is a global figure, albeit in some circles he is considered notorious.  Never-the-less, his visit to Uganda, once again puts the global spotlight on Uganda, from the Arab-world to the Western-world.  Uganda stands to gain from a boom in tourism.

Old Kampala Mosque is a symbol of Col. Gadaffi’s genuine conviction and belief in religion, Islam, and a sign of how religion can be used for promoting development for the greater benefit of the people.  This is as opposed to religion promoting bad politics of sectarianism as is the norm in Uganda.

This article has been read 2,151 times
COMMENTS