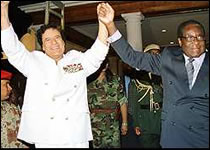 While visiting earlier in the week, Libyan leader Col. Muammar Gadaffi told President Yoweri Museveni never to consider retiring from the presidency. Gadaffi, the crusader of a single African government, said the term limits entrenched in constitutions and political parties were alien to and inhibited people from expressing their will. Gadaffi, who has been in power for four decades, rallied African leaders to stand firm against former colonial powers forcing Western democracy down their throats. He also wooed the youth to reject dictators from the West.He mentioned Belgium, Britain, Portugal, Italy and France among countries,which he says, robbed Africa’s natural resources, treated Africans in a dehumanising way and left them under-developed. He said revolutionaries and leaders with vision would take forward. “In we have Museveni; in Zimbabwe, we have Mugabe. They are real African leaders. They are serious. They should stay. Such leaders should not go,” Gadaffi affirmed.

is set to roll out a bio-diesel master plan it hopes will help it cut its kerosene consumption by half and significantly reduce its diesel usage in the next three years. Energy economists said the plan could initially help the country save Sh3.4 billion annually. The plan comes at a time when petroleum prices have risen to unprecedented levels in the global market, fuelling inflation and leaving huge import bills in the hands of net importers such as . Crude oil price touched the $109 per barrel mark for the first time in the history of oil trading, signaling a steep rise in pump prices in the next few months. The impact of high oil prices is expected to be particularly high on low-income households where paraffin is the main source of energy for lighting and cooking.

’s Centre for Chinese Language Studies has started offering Chinese courses to equip Namibians with Chinese language skills. The centre is expected to promote inter disciplinary research and understanding of Asian cultures, languages and values within and the Southern African Development Community. The university’s Public Relations Officer, Utaara Hoveka, said the increasing role China and its people are playing in and the global arena at large, require an institution that can help bridge the cultural gap. The establishment of the centre will not only ease communication between Namibian and Chinese nationals, but also create opportunities for Namibians wishing to travel to China.

Cameroon Prime Minister, Head of Government, Chief Ephraim Inoni laid the foundation stone for the construction of an 86 Megawatts thermal Plant in Yassa, Douala. The thermal plant project has been qualified as a timely initiative aimed at addressing the energy deficit facing the country. The project is also in line with the government’s ambition to increase energy in the country so that more industries can be set up to ensure a harmonious economic and social development of . The Project, which will costs $124 million, is meant to diversify generation sources through different types of fuel in ’s power sector that currently depends on 95 percent hydroelectric generation.

has been named the filthiest and most expensive European city in a new survey. The capital edged out for the‘unwanted’ title of filthiest European city in a survey of travelers from the Trip Advisor Company. was runner-up to as the most expensive city but the capital fared far better in other categories being voted the best for night life and parks. Despite being considered expensive, is second only to for having the best shopping. The French capital is considered to have the most unfriendly hosts, followed by and . Brussels- despite its beer - has been voted the most boring European city, followed by Zurich and Oslo.The cleanest city award has gone to Zurich whileDublin is considered to have the most friendly and helpful locals. , and are the most romantic cities, while Paris and Rome have taken the top two places in the best cuisine category.

The United Nations General Assembly designated 22 March of every year the World Water Day by adopting a resolution. This day was to be observed in conformity with the recommendations of the United Nations Conference on Environment and Development contained in chapter 18 (Fresh Water Resources)of Agenda 21. States are invited to devote the Day to implement the UN recommendations and set up concrete activities as deemed appropriate in the national context. This years theme for the day is Sanitation. Key issues to be addressed include: Hygiene Promotion, Sanitary Facilities, Water Quality Case  studies, Waste water Treatment, Sewerage Systems, Policy and Institutional Framework and National Information on Sanitation.

This article has been read 2,317 times
COMMENTS