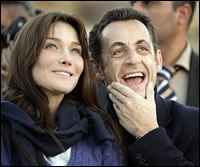 Whenever one is launching a new product in the market, it is always wise to get a familiar touch to enable the new clientele identify with the item. Another option is to come up with a unique but captivating packaging of the item. The essence of it all is to ensure the product yields a higher rating on the first-impressions scale.

When French President Nicolas Sarkozy made his first official visit to Britain last month, it was natural to expect flashy headlines about his visit dominating the mainstream media in the English nation. But as events unfolded, it was the elegant Carla Bruni-Sarkozy, French First Lady who became the centre of attraction instead.

Despite the fact that Nicolas did most of the talking,  it was his wife who made the headlines.The French president may have discussed matters of international importance, sealed a string of big bilateral deals and hailed a new era of Franco-British brotherhood-but Bruni’s literally stole the show.

Were African merchants interested to take any lessons from Mrs. Sarkozy, it would be that of translating inner elegance into external appearance. She exuded the mythical understanding of the Britons that no one could beat Princess Diana in elegance. Well, Bruni may not have beaten Diana yet, but soon, she might.

Bruni’s choice of dressing changed the skewed perception of many in the world about  her. It may not have been her intention to effect the change, but if media attention is anything to go by, Mrs. Sarkozy understands the power behind appeal.

In his story I, Pencil, Leonard E. Read personifies the pencil and takes its place in saying: “I, pencil, am a complex combination of miracles; a tree, zinc, copper, rubber, graphite and so on. But to these many additives, the configuration of creative human energies have put me together into one simple piece appealing to all.” If a pencil was marketed as a refined tree, many of us would spend eternity without ever knowing its existence. However, the creative marketers who understood perceptions and image made it possible and easier for us to access the ‘wooden pen.’

It all boils down to what we make of our outer appearance in reflecting the elegance within. Like a marketer finding a strategy to market his goods, we should build our external image in parity with our brilliant thoughts. Establishing a visual identity is a strategy any African marketer should never forget. Whether it is the marketing literature, interactive promotions or packaging the product, they all ought to carry a unified communication that appeals to the market.

While models spend hours before the mirrors working on their make up and hair, you ought to spend even more time working on product 'you.' Like a company that has established a great name, you have the potential to build your image into one that beats the odds.

For a business venture to flourish, you’ve got to ensure its outer image is in sync with its inner components. Meaning, if I run an agro-vet that sells a chemical that kills mosquitoes and roaches in the house, I should strive to ensure my house is free from  the said parasites before I go out to preach the same. Otherwise, my business will be subject to jeopardy.

If I were Bruni, I would strive to prove that outer appearance is a pointer towards inner elegance. It does not matter what people thought of your image before, you can re-invent yourself and make a better impact that is not only intriguing but also impressive.

This article has been read 11,363 times
COMMENTS