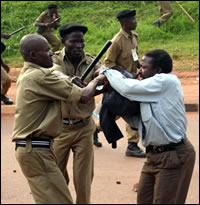 The tussle between governments and the media over what the public should know have been raging for several years not only in Africa, but across the globe. Governments react to media footage  by closing down the media offices, conducting raids on the premises, beating up journalists, shooting or jailing journalists. Deportation of journalists and declaring them persona non grata has taken shape as another option. Press freedom in Africa is still being held captive by both the government and the world. Article 19 of the UN Declaration of Human Rights which states that Freedom of Expression is a fundamental to human right is worth embracing.

As the rest of the world celebrates, one photojournalist in Kenya, Wallace Gichere died at Kenyatta National Hospital-Nairobi after succumbing to injuries he got 17 years ago after falling off a first floor window. The police had tried to arrest him. Gichere remained on a wheelchair for all those years. Several others have undergone the same ordeal. Uganda, Rwanda, Nigeria, Zimbabwe and several other African countries have not been left behind in gagging the press.

The democracy we have always fought for so hard is not the model we are witnessing in most countries across the continent where the state rules with total impunity, with no respect for the rule of law and total disregard for the will of the citizenry.

African media’s growing reliance on private advertising and the state is another factor threatening  press freedom. The environment of  free competition, better content and the chance to contribute to greater democracy is non-existent. Most advertising firms don't post adverts in media oulets they perceive do not hold their social, political and economic agenda. This has forced  media houses to throw ethics out of the window in a bid to tap money. News content is increasingly being shaped by advertisers and panelists and this poses as a major threat for press freedom.

Why are most African leaders insulating themselves  from public scrutiny? The media is the people’s watchdog.Africa will not indeed experience democracy if the Press is not allowed to do its role of making us hold the government accountable and keeping us informed. The barbaric practice of gagging the press should end once and for all.

The media is one tool that empowers the citizenry and this empowerment is a multi-dimensional social and political process that helps people gain control over their own lives. This can only be achieved through access to accurate, fair and unbiased information, representing a plurality of opinions, and  communicating broadly. Being a tool that provides information and ignites dialogue between different members of the society, a key element to participatory democracy,  the media should therefore not be taken for granted.

This article has been read 2,231 times
COMMENTS