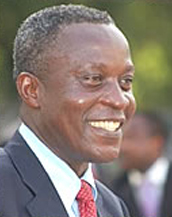 The sudden death of Ghana’s Finance and Economic Planning Minister, Kwadwo Baah-Wiredu, 56, in a South African hospital, has not only transformed political Ghana (seeing  the political divide aggregating in shock) but also highlighted the relationship between death and development.

In a world fast advancing in science and technology, Ghanaians are expected to live a much more comfortable and good life- living much longer than Baah-Wiredu’s  56 years. But Ghanaians’ indicators of well being, if Baah-Wiredu’s 56 years are anything to go by, are poor. Despite his high station in life as Finance Minister, Baah-Wiredu’s 56-year-old life fell below Ghanaians' life expectancy of 59.1 as computed by the United Nations Human Development Index.

In Baah-Wiredua is complicated dance between development, death and African cosmology. The emotional sympathies rendered to Baah-Wiredu reflect the general consensus from all the political divide of his attempts to better Ghana. Baah-Wiredu was a fine product of Ghana’s 16-year-old democratic dispensation against the backdrop of good figures like him buried in the rough and suffocating long-running military juntas and frightening one-party systems. Democracy unearthed Baah-Wiredu and democracy has brought to light why Baah-Wiredu should die so relatively young.

In African metaphysics, there is nothing like Baah-Wiredu’s sudden death. Baah-Wiredu, by African cosmology pre-destination belief, was born to die at 56 years, having fulfilled his earthly mission from birth till his September 24 death in South Africa.

In African cosmological timeline, Baah-Wiredu’s struggles were pre-programmed before he was born into Ghana. This makes death not a misfortune, but meaningful, valuable, and beneficial. Part of Baah-Wiredu’s pre-destination was that in the final analysis, he had to be the point-man for Ghana’s development as Finance and Economic Minister –rolling policies around, traveling the globe for trade negotiations, investment, playing with arcane statistics, and selling Ghana internationally for progress against the universal fact that Ghana is ranked among the last 35 poorest countries in the world.

African concepts of death limit the philosophical and academic speculation of death in Western sense. John Martin Fischer and associates explain in The Metaphysics of Death that death is either caused by permanent cessation of the heart, lungs or the brain to function. In the context of African cosmology, the causation of death by either cessation of brain or heart or lungs is held at bay. In this sense, Baah-Wiredu’s death, caused by pneumonia, is downplayed and pre-destination heightened: pneumonia or no pneumonia, Baah-Wiredu was destined to die at 56.

This creates a complication for African developmentalists as Africa, more in its culture, increasingly meets modern development ideals. How to convince traditional Africa that Baah-Wiredu wasn’t destined to die at 56 but much longer, if all prosperity indicators are better, is the big task.

The economist Nii Moi Thompson, echoing the feelings of most Ghanaians, asks agonizingly, “Could we have saved Baah-Wiredu?” Gabriel Ayisi writes from New York, USA, where health services are better: “Mr. Kwadwo Baah-Wiredu Didn't Have to Die.”

Balancing traditional Ghanaian cosmology with practical prosperity indicators such as good healthcare, Thompson writes, “But rather than mourn his passing as just another death of a popular public official, we should consider it an opportunity for critical, if uncomfortable, reflection over the issue of access, equity and efficacy in the delivery of health services in Ghana. The question inevitably arises: Could Baah-Wiredu be alive today if we had in this country the kind of high-quality medical services that he was seeking in far away South Africa? Possibly. Possibly not.”

The need for longevity through better development indicators is the central mission of all nation-states. In developed countries where indicators of well-being are better, people live longer because of improved medical capability and better sanitation. In Ghana and other developing nations, poor sanitary conditions and lack of access to modern medical technology makes death from infectious diseases more common.

As Baah-Wiredu exemplified, life expectancy is shorter in places like Ghana than developed places like Canada not because of some cosmological dice that foretold when one will die but because of inferior sanitation practices and other appalling development indicators. Baah-Wiredu’s death should therefore push Ghanaians to struggle to live like those in the developed countries – comfortable, longer, better life. For in the final analysis, it doesn’t matter whether you are Finance Minister, “Big Man” or “Big Women,” all Ghanaians are mired in the same pitiable development pointers that make us live uncomfortable life and die earlier in some sort of Hobbesian anarchy.

This article has been read 2,700 times
COMMENTS