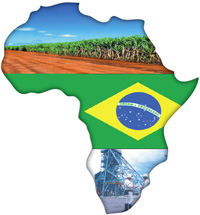 Historians have shown that the formation of Brazil was based on a close relationship with Africa. Africa and Brazil were complementary parts within a common system of colonial exploitation. Therefore, we share a common history, even though it contains abject aspects, because they are related to slavery.

But the positive aspect is that today we are proud of our African heritage. As the historian and diplomat Alberto da Costa e Silva says, only those who do not know Africa may fail to recognize how African are the gestures, the manners and the lifestyle of Brazilians. We are, in great part, Africans too.

President Lula’s government considers cooperation with Africa as one of its priorities. I have noticed that a majority of  African countries are going through a period of strong economic growth. That is significant.

Now I would like to share a little bit about the recent Brazilian history. Between 1966 and 1976, Brazil grew, on average, 9.2% per year. It was the so-called “economic miracle.” Nevertheless, such growth did not benefit all. As the income of the poorest shrank, the share of the income of the wealthiest grew considerably. That was not a miracle. It was a process of social exclusion and income concentration, with tragic effects that have haunted us for decades.

The year of 1988 was an important milestone for breaking this process. Right after the dictatorship, we had a constituent assembly with broad social participation which resulted in a new Constitution, which defined social policies as a right of every citizen and an obligation of the State, thus bringing social protection to the realm of public policies.

Important laws regulating social policies were passed. In 2003, the constitutional obligations related to social rights were fulfilled. President Lula gave priority to social policies, unequivocally opting for a model of growth directed for all, but with a preference to the poor. Since 2003, we have experienced an average annual growth of 4%. It is a sustainable growth, with reduction of poverty and inequalities. More than 13 million people have overcome poverty. For the first time, we are growing and distributing income simultaneously. The social investments promote the creation of strong domestic markets and the process of poverty reduction boosts the economy. Themes that used to be ignored, such as hunger eradication, fight against hunger and reduction of social inequalities, have gained top priority in the political agenda.

President Lula created the Ministry of Social Development and Fight against Hunger in 2004, in a perspective of State public policies which ensure social rights for everyone. I would like to present some of the main features of the model of social protection and promotion that we have been building in this ministry:

The Bolsa Família Program (or Family Fund), integrated income transfer programs, which were previously limited and sparse, and it was expanded the until we reached 11 million poor families – 45 million people in all of Brazil – who earn up to US$ 55 per capita. The resources transferred – on average, US$ 39 a month per family – have significant and immediate effects upon the life of the poor population, because they promote food access and fulfill basic needs. In addition to the financial benefits, families must comply with conditionalities, keeping their children in school and attending primary health care services, which contribute to breaking the intergenerational cycle of poverty.

Bolsa Família is a successful program with international recognition. But it is important to mention that such program is part of a context of social protection and promotion, and it is integrated with systems of food and nutrition security and social assistance.

Based on the Zero Hunger experience, the National System of Food and Nutrition Security was implemented in 2006 and it integrates actions directed to ensure the right to adequate food. It includes programs for the strengthening of family agriculture, such as the Food Acquisition Program, which ensures the food purchase to 94 thousand small farmers all over Brazil. The food is distributed to 11.4 families in situation of vulnerability. It also includes water access programs to those who need it, as a component of food and nutrition security. We have already built 206 thousand cisterns in the semiarid region to store rainwater in poor households. Other 50 thousand cisterns were built by our partners.

The poor elderly and the disabled people who are unable to work receive special protection. All over Brazil, 1.7 million people with disabilities and 1.5 million elderly people receive US$ 189 monthly from the Continuous Cash Benefit Program. A challenge faced by the beneficiaries is their emancipation and the chance to seek new opportunities. For that, we are offering professional training for family members who are beneficiaries of our programs, in order to give them the opportunity to work in one of the infrastructure building projects undertaken by the federal government.

The expansion and integration of those policies is an important step to consolidate the welfare state in Brazil, to ensure citizenship rights and to promote equal opportunities for all.

Although poverty and inequality are being reduced, and we are also overcoming hunger, we still have important challenges ahead. The implementation of the social policies is not an easy task and there are still a great number of poor families in Brazil. But the positive results motivate us to move forward.

I would like to reaffirm the obligation assumed by Brazil to contribute to the eradication of hunger and extreme poverty in the world, and collaborating with Africa is a priority in this effort. In the Ministry of Social Development and Fight against Hunger, we are actively working in the South-South Cooperation with Africa, under the leadership of President Lula in consonance with the Brazilian Ministry of Foreign Affairs. We would like to share our experiences and also to learn from the African programs, policies and ideas. In 2007, we conducted joint activities with Ghana. In 2008, we have already worked with Angola, Mozambique, Namibia and Kenya.

We want to strengthen our ties with the African Union, and I congratulate it for assuming a leadership role in the process of debate about social development, an example that the world should follow. The eradication of hunger and extreme poverty is a challenge to be overcome by the entire world, and it will only be possible with the cooperation among governments, multilateral organisations and international civil society actors.

This article has been read 1,783 times
COMMENTS