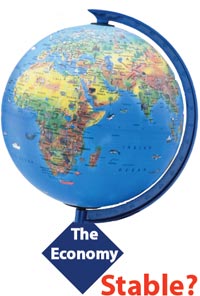 The global financial system has malfunctioned and there appears to be a need to seriously consider what changes and adjustments are required to ensure that the global financial architecture is better equipped to deal with future challenges. Given that the changes will inevitably require certain vested interests to be confronted, the international community will have to commit itself to put the greater good of all of us at the centre of any efforts going forward. The change must, however, be managed and embedded in concrete actions plans to create stronger institutions, with more balanced representation, that will contribute to long term financial stability and sustainable growth.

Presently, we are witnessing a severe financial crisis, a crisis that many commentators view as the worst since the Great Depression. Even before the escalation of the financial crisis, growth in the advanced economies had been faltering, as shown in the recent World Economic Outlook of the IMF. Growth in advanced economies has weakened and is well below potential. Economic activity in developing countries appears to be moderating at a somewhat faster pace than had been anticipated. The danger of a major and protracted slowdown in global growth, with inflationary pressures only likely to react with some time lag, is indeed very real.

By now we seem to have a general consensus that accommodative monetary policy conditions in developed markets laid the foundation for an aggressive search for yield, which resulted in mispricing of risk on a large scale, coupled with some over -zealous “financial innovation”. The resultant combination of reckless lending and unsophisticated borrowing, which started in the USA ended up engulfing large parts of the financial world.

A need for change

The International Monetary Fund (IMF) and the World Bank  were created at the end of the Second World War to fill a much needed gap of providing capital in the global financial system, as well as ensuring the orderly functioning of the system. The IMF was, inter alia, created to provide financial support to countries that may be experiencing short term balance of payments problems, while the World Bank was established to assist countries, in particular European countries, in their post war reconstruction efforts.

Over time, the size and the needs of the membership of these institutions have changed. These institutions have, however, not kept pace with the changing conditions in their operating environment. The governance and representation structures have lagged behind the changing global economic realities. The IMF has not fully lived up to one of its core responsibilities, being the conduct of effective surveillance of the global economic environment and that of individual countries.

The relevance of the Bretton Woods Institutions, as the IMF and the World Bank have become to be known, has come under severe scrutiny, particularly over that last ten years in the aftermath of the Asian crises. Questioning the relevance of the IMF has intensified in the wake of the current crisis. A key area of criticism has been the failure of the IMF to warn its members of the outbreak of financial crises in a timely manner. The IMF and indeed other global financial institutions are in serious need of change.

A need for Collective Action

We need collective global action to overcome the current crisis. The IMF was established to promote coordination and collective action in order to avoid the kind of crisis we are now facing. We all saw the dangers building up over the last few years, particularly with regard to global imbalances.

These problems have for many years been discussed within the International Monetary and Financial Committee (IMFC). But this common knowledge was not enough to spur any determined action. Global policy makers were not able to act in unison, and the institutions tasked with facilitating a collective response could not or would not act in accordance with their mandates. This failure on the part of the global economic policymakers needs to be recognised, and as we acknowledge this failure, we must recommit ourselves to deeper multilateral cooperation, mutual accountability and active policy coordination, with adequate representation and participation of developing countries.

The weaknesses in addressing these global imbalances are now clearly revealed, as well as the flaws in the regulatory environment of some advanced economies. The current weak global economy has also highlighted the gaps in global economic governance, and the absence of sufficient institutional capacity to manage coordinated global responses to simultaneous global crises. It is incumbent on all countries not only to strengthen their respective policy environments domestically to prevent future meltdowns, but work needs to commence collectively to create a global financial architecture that can respond to crises of this nature in the future.

In addition, policy actions are needed for improving the economic infrastructure and creating an environment conducive to investment, and for strengthening the macroeconomic framework and sheltering the poor from the adverse consequences of the crisis. While remaining committed to prudent policies, greater flexibility will be required to soften the impact of exogenous shocks, even as we consolidate the gains of better macro-economic frameworks.

A need for change of the Bretton Woods Institutions

There is a widely held perception that the Bretton Wood Institutions have become instruments in the hands of the major economies to control smaller member countries and indeed sometimes even larger emerging market countries.

Over the last ten years the IMF and the World Bank have come under consistent criticism amidst the ever larger calls for them to change. A year ago the Crockett Committee reviewed the income model of the Fund and made some significant recommendations to ensure the sustainability of IMF resources. Some of the recommendations made by the Committee to the IMF board are now being implemented and others will be implemented once endorsed by national legislatures.

The IMF has also created a new Committee under the Chairmanship Mr Trevor Manuel, the Minister of Finance in South Africa to review its governance structures and to look at how to improve the effectiveness of the institution. The committee is due to report back to the IMFC at its next meeting in April 2009.

The IMF and the World Bank found themselves completely on the sidelines in recent weeks in coming up with recommendations on how to address the current financial meltdown. While it is completely understandable that as countries are expected to come up with their own action plans to get economic conditions on even keel, it should be incumbent upon the Bretton Woods institutions, and in particular the Fund to provide overarching advice on how to stabilise the global economy, as a global public good. However, it would appear that it has been easier for the Fund to give direction to developing countries in times of crises than to provide similar advice to advanced countries.

Notwithstanding the weaknesses highlighted and the clear need for improvements, the impression gained at the annual meetings earlier this week suggest that, with the right level of commitment from all stakeholders, the BWIs may adequately reform in the period ahead and regain their relevance.

Where do we go from here?

With the financial landscape around us under severe stress, we can rightly question, “Is there light at the end of the tunnel?”

The recent financial turmoil has exposed the peripheral nature of the IMF's functions in global finance. Once the crisis struck forcefully, its role was unclear and peripheral. The Fund needs to be strengthened in order to place it on the centre stage, unless we would wish it to become totally irrelevant.

On the other hand the crisis presents the IMF with an opportunity to revive itself. With the necessary expertise, its universal membership and the convening power it can play a vital role into the future, especially if it is able to transform its governance structures to meet the challenges of tomorrow’s world.

Other institutions such as the Financial Stability Forum, the Bank of International Settlements and the G-20 have also enhanced their claim on providing leadership in the global economic environment. The G-7 has proved itself to be increasingly irrelevant in the changing economic environment of today.

Lessons to be learnt from the current crisis

It is too early to draw lessons from the crisis that is yet to run its full course. However we must continue to debate the causes of the crisis and contribute to solutions to avoid a similar situation globally and at home. We need stronger institutions that should be lasting, so that the current problems would not recur quickly. However, as the Australian Prime Minister recently said at the United Nations:

“The failures that we have seen in recent times do not lie in the institutions alone. The failures lie more in the poverty of our political will to animate these institutions to discharge of the purposes for which they were created.”

Is the global governance we are dealing with today still relevant? Clearly it is not. We need to craft a global framework of economic and financial relations that is inclusive and not only serves the needs of a few large economies. The G-7 has for long been acting as the steering committee for global economic governance, The G-7 is an exclusive economic club for rich countries and has outlived its usefulness, since some members in the club are no longer part of the richest members in the global economic environment and their influence will decline even further in the years to come.

Countries like China, India, Brazil and Russia are playing an increasingly important role as the engines of growth in the global economy, and none of them are members of the G-7. I am sure that the G-20 will become more relevant in the period ahead, since the G-20 is small enough to allow for meaningful discussions, yet its global influence is broad enough to incorporate all the major players. As a collective the G-20 contributes almost 90 per cent of global Gross Domestic Product and trade. The G-20 as a forum has also already proven its ability to contribute to the global dialogue and providing imputes for new global economic governance.

The global crisis of today provides us with a new opportunity to act comprehensively and collectively for the long term – rather than selectively and separately for the short run.

We need the necessary resolve to work increasingly in a cooperative fashion with institutions such as the IMF, the BIS and the FSF and the G-20 to come up with action plans which should be implemented urgently and comprehensively. We need new global governance structures that are inclusive for all the stakeholders.

This article has been read 2,131 times
COMMENTS