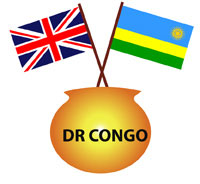 The sudden outbreak of fighting in eastern DRC this past week underlines a basic fact of life in Africa. There can be no peace and development in the Continent unless and until Africans control their own destinies. The self-appointed ‘General’ Nkunda is nothing more than a warlord who has been used as a cat’s paw for forces whose interests are inimical to the well-being of the Continent.

In every crisis in the DRC since the fall of Mobutu Sese Seko and the subsequent destabilization efforts launched by Rwanda and Uganda, ‘General’ Laurent Nkunda has played a negative but pivotal role. Given the less than 2 million ethnic ‘Tutsis’ in a nation of close to 70 millions, it is frankly baffling that Nkunda should have such a decisive role affecting the stability of this vast nation. It is virtually impossible that Nkunda could affect the lives of so many people and control such a vast swathe of territory unless he has substantial backing behind him. Whence comes the money to arm and pay his ‘soldiers,’ supply his intelligence, provide brand-new uniforms and artillery?

The systematic looting of the area’s resources alone cannot instantly provide the millions needed to prosecute war with such frequency as has this warlord done. We need to examine the covert war that is being waged for control of Africa’s resources.

Everywhere in Africa there is conflict, there are strategic resources and bitter, irrational ‘wars’ for control of these resources. Since logically Africans would not be fighting each other for resources they all share in one way or another, the answer must be that they are fighting as proxies for  external forces. It is instructive that Nkunda is making noises about China’s investments in the Congo’s railway and road infrastructure. To underline the massive destabilization offensive against Africa, we have the past weekend witnessed a shadowy group calling itself the Bakassi Freedom Fighters, hitherto unknown, springing up in Cameroon, kidnapping foreign workers and demanding the fulfillment of conditions that can only lead to destabilization in the region. To complicate the issue, a new instant ‘rebel’ group, the Niger Delta Defense and Security Council, issued statements that it was allied to the so-called Bakassi Freedom Fighters. The region is oil-rich.

Overnight in resource-rich regions, brand-new armies emerge, making unreasonable demands which ultimately lead to the national government’s heavy-handed response and the subsequent disruption of populations and food supplies. Where do these armies come from, well-equipped with pristine uniforms and weapons and instant access to news media? We would be naïve in this contemporary world of intrigues, power politics and a US President that lied his country into a losing war in Iraq that Africa’s problems spring from ‘tribalism’  and political inexperience.

Africa has perpetually been the victim of external forces whose only concern has been the ruthless exploitation of the Continent’s human and natural resources. From slavery right up to the 21st  century discovery of high-tech minerals in the DRC have encouraged  external forces to fight their proxy wars on African soil, spilling African blood as readily as a chronic gambler wastes his money.

Do the ‘wars’ in the DRC, Sudan, the Niger Delta in Nigeria, the incipient conflict in Cameroon and Somalia, among others, spring from genuine grievances or have been exploited for strategic benefit by external forces? Let us take the example of Somalia, for instance: in 2006 the Islamic Courts in Somalia brought a measure of stability to the war-torn country: markets re-opened, garbage was collected and citizens enjoyed a hiatus of tranquility with hope of future peace. The United States, with its obsession over the ill-advised ‘war on terror’ decided that the Islamic Courts administration harboured ‘terrorists’ and recruited its satrap Ethiopia to invade Somalia in order to prevent al-Qaeda [the catch-all bete-noir] from gaining a ‘foothold’ in Somalia. An ugly insurgency ensued, guaranteeing chronic chaos in a region that does not need it.

The war in Somalia only serves the United States, not the Somalis nor the Ethiopians. Off the coasts of Somalia ‘piracy; has proliferated- but why? With the implosion of the Somali government and the development of warlord culture, vulture nations sought to exploit the instability for their benefit. Thus we had fishing boats from Asia and the European Union poaching the rich fishing stock off the Somali coast and unscrupulous governments dumping their toxic waste in the sea. The natural reaction of the Somali has been to react; first they attacked the trespassing vessels, but foreigners have always underestimated the Somali and the depredations continued. Somali resistance evolved into what the West calls ‘piracy,’ thereby setting the stage for intervention in a crucially strategic region of Africa [the Americans, with the collusion of France, have troops placed in Djibouti, which already has a Foreign Legion base in an ostensibly sovereign African country].

We have the intractable Sudan problem with Dar-Fur [home of the Fur people] exacerbated by Western interference by ‘humanitarian’ celebrities, aid agencies with covert ties to Western corporations and pro-Israeli groups; the ongoing MEND debacle in the Niger delta of Nigeria with well-armed ‘militants’ kidnapping and threatening and disrupting oil production and incidentally threatening Chinese investment in Africa, similar threats issued in Sudan and by the self-appointed General Nkunda in DRC.

What is going on in the Congo and the rest of Africa where seemingly intractable conflicts erupt at a moment’s notice in strategic regions? The French foreign minister Bernard Kouchner and his British counterpart David Milliband have traveled to the country to ostensibly ‘mediate a peaceful solution to a growing humanitarian problem.’ The British Foreign Office minister Lord Malloch-Brown has warned that British troops may be sent to the Democratic Republic of Congo. The European Union has already made similar threats about sending a ‘European’ force to the DRC for ‘humanitarian’ reasons. If one reviews the history of the infamous Scramble for Africa in the last decade of the 19th century and the first decade of the 20th, one would find similar problems of exploitation and instability in the same regions as today, and for the same reason- exploitation.

The very same regions that are being destabilized today are the very same regions that were destabilized in the period of the Scramble for Africa : the Sudan was under attack as were Somalia, the so-called Belgian Congo and West Africa for either mineral and human resources or strategic access to enable penetration and colonization of the interior and then as now, the European powers suborned local warlords to serve their interests.

‘General’ Laurent Nkunda with his pressed uniform and walking stick poses for Western journalists who conveniently appear for his ‘spontaneous’ interviews and invokes the spectre of ‘genocide’ to rally Western sympathies. Who does he answer to? Who pulls his strings? The immediate answer would be Rwanda which seems to have a vested interest in the chronic instability of its giant neighbour. But the real question is: who pulls Rwanda’s strings? When we realize that former British Prime Minister Tony Blair is an adviser to the Rwanda government, the pieces begin to fall into place.

Before our eyes in the 21st century, Africa is being re-colonized, subtly, but surely. Even if, as expected, Barack Obama becomes President of the United   States of America, the re-colonization will continue. Only Africans can stop this and if the leaders will not, then the people must rise up and protect their very existence, because, in the final analysis, the African people, the world over stand alone.

This article has been read 2,410 times
COMMENTS