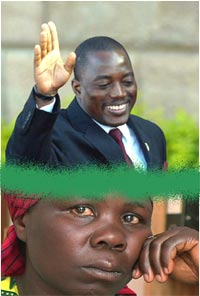 Over 24.3 million liters of African blood (5.4 million people killed) from the Democratic Republic of Congo has powered the Western World's electronic and military hardware industry for the last 10 years. The so called 'civilized world' does not find it despicable to drench the African soil with blood for purposes of driving their industrial might. Their African agents simply pamper their egos as millions of innocent lives scream themselves to death.

London, New York and Paris are among top consumers of minerals from Congo. They lecture humanity on the need to uphold human rights and the sanctity of property rights whilst their thirst for strategic minerals unleashes terror on innocent women and children in Eastern Congo.

Little focus is put on the root of conflict: access to and control of subsurface wealth. The conflict in Congo ensures a steady supply of precious minerals to the West. Coltan (Columbian Tantalite) for example, is used in the making of electronic gadgets such as cell phones and computer parts which are on high demand all over the World.

A well governed Congo can feed Africa, and give aid to the West. But Africans are disoriented; they are unable to build institutions, structures and frameworks that can ensure peaceful and profitable exploitation of resources. Congo turns civilized people into sharks that have smelt blood; they abhor strong institutions!

Way back in the late 1890s; Belgium King Leopold's agents would chop Congolese hands, dry them like fish; pack them and have them shipped to Belgium outposts as evidence of Africans punished for not collecting rubber. The Western countries involved in Congo conflict do not need dried hands anymore (because living people can testify); they are going for Congolese flesh and blood instead. The situation is likely to be more vicious with the entry of China since each of these giants is likely to resort to more bloody strategies. It is 18th century all over again!

The Economist, (August 21, 2008) refers to President Paul Kagame as "A Flawed Hero" whose army made a fortune of £20 million a month in the year 2000 mining Coltan and still exports diamonds and gold from Congo. The rest of African leadership is looking the other way because they failed to rescue Rwanda during the genocide.  Criticizing Rwanda on the Congolese issue is equated to sympathizing with those who committed genocide. In other words, African leaders have given Mr. Kagame a green light to take cover in Hammurabi's law of an 'eye for an eye' in Congo while he opens up the country to Western plunders.

All civilized people of the World must urgently help put an end to the conflict in Congo. Hold your governments accountable! The leadership in recently launched Africa free-trade-area must speed up drawing of structures and institutions that will guide access to subsurface wealth in their member states to limit country to country banditry. Trade enforced by guns and bombs is not free: let Congo do business in a structured framework!

London, New York, and Paris have the key to stop the Congo bloodshed. Sending the military to Congo is not the solution - forcing enterprises that exploit and drive the Congo mineral market to respect use of existing Congo institutions is the key. Major consumers of Congo's resources ought to stop arming combatants. The Congolese elite on their part ought to focus on the long term and draw up a fair trading system that will enable business in surface and subsurface wealth benefit their country. Citizens of the World must not rest until the atrocities committed against humanity in Congo are exposed and stopped.

This article has been read 2,403 times
COMMENTS