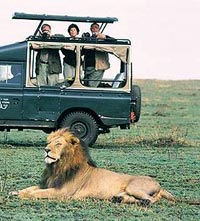 As the global economic crunch continues to bite, authorities are warning that the Kenya tourism industry will soon feel the pinch.

Speaking during a recent travel event in Nairobi, Tourism Minister Najib Balala said that the sector will soon experience the impact of the ongoing global financial crunch. The minister however said that it is only the low revenue parts of the sector that are expected to feel the greatest impact of the crisis.

Mr. Balala's remarks have been echoed by tourism sector professionals who are asking the government to come up with ways of cushioning the sector from the effects of the crunch.

According to Ms Christine Odero, the marketing manager for Africa Point – an online travel agent based in Nairobi, many customers from America and Europe are cutting back their travel expenses a move that will affect revenues of the tourism sector. Ms Odero  laments that the slowdown is a huge blow to a sector that has just recovered from stagnation experienced earlier in the year following chaos that erupted after the December 2007 disputed presidential election.

“The industry has just recovered from stagnation following the post-election violence and the slow down will be another disturbing issue,” says Ms Odero adding that Kenya's tourism depends heavily on Western visitors whose summer has been hit by the economic crunch. Kenya is considered one of the leading destinations in Africa, its peak season being September to January.

“We are anticipating to see significant cancellations in hotel bookings by tourists after the events in American and European economies and this is very sad for a struggling tourism industry,” says Gideon Obegi, a Nairobi based hotelier. “It has come at the worst time when the sector is making some recovery after the after-polls violence that brought Kenya tourism to a tight corner earlier in the year,” he added.

The Kenya Tourism Board (KTB), the state body charged with marketing destination Kenya, has also confirmed the sector will have to wait another 12 months before tourist numbers can reach the highs witnessed last year.

Speaking during the recent release of the third quarter tourism performance results, KTB managing director Achieng’ Ongong’a said: “The credit crunch and the fluctuation of the US dollar against other currencies will affect long-haul travel, especially the luxury travel segment.”

Dr Ongonga added that between January and September this year arrivals stood at 939,791 compared to 1.35 million during the same period in 2007.

Meanwhile, the UN World Tourism Organization (UNWTO) has already warned that global tourism will feel the heat of the economic meltdown that has seen stable economies like the United States and the United Kingdom slowing down to record depths.

Addressing UNWTO's Economic Council meeting held recently in Madrid, the organization's Secretary General Franscesco Frangialli said that numerous businesses worldwide are already suffering from the credit crunch and many business as well as leisure consumers are cutting back on travel expenses.

“Experience teaches us that tourism is resilient, but there is no denying that there is a certain stage of deterioration of situation beyond which tourism too will begin to suffer,” Mr Frangialli said.

Industry experts are predicting that the industry could be hit harder for the remaining part of the year and this may continue to the first half of 2009 as the slow down sails through the global economy.

The sector last year earned the country more than a $100 million beating export sectors from a record one million visitors. Some 1.5 million visitors were projected to visit Kenya in 2008 but chaos thwarted the ambitious target, leaving the sector on its kneels.

Recently the Government of Kenya gave $13 million to KTB aimed to promoting the country's tourism sector but it will be interesting to see the kind of results this promotion will achieve in view of the current events in the international markets.

This article has been read 8,606 times
COMMENTS