Kenya Still at the Heart of the African Safari Experience 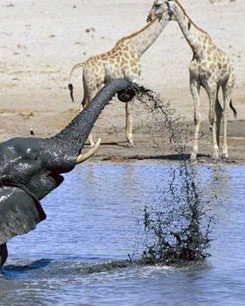 Although the economic meltdown in the US and the UK has taken toll on the global tourism industry, Kenya has still managed to get its good share of visitors. This is evidenced by the huge number of visitors who recently jetted into the country to catch a glimpse on this year's Great Wildebeest Migration at the Masai Mara National Park.

The great migration is an annual event that sees millions of wildebeest and zebra from the Tanzania's Serengeti National Park in search of water and pasture. The timing of the phenomena is conditional on the rains and occurs between June and August. The reverse journey is usually taken in October.

According to the Kenya Tourist Board, most of the visitors who toured the country during the period were Britons followed by Americans and Italians respectively.

But with or without the migration, Masai Mara has had a history of drawing numerous visitors from all over the world. The national park is tops the list of Kenyan national parks as it offers bespoke wildlife viewing experience whatever time of the year you visit. The Mara is 5 hours from Nairobi by road and 45 minutes by light aircraft.

Though not as famous as the Mara, Samburu National Park is another wildlife haven. Here you will spot lions, elephants, cheetahs and the elusive leopard as well as  Grevy's zebra, reticulated giraffe, kudu and gerenuk that are unique to this northern park. Tours to Samburu are often accompanied by brief visits to the nearby Shaba and Buffalo Springs game reserves. Samburu is the most ideal camel safari getaway and can be accessed by road from Nairobi.

Tsavo National Park is a great attraction at the Kenyan coastal region. The 20,000 sq km national park is administered as two units: Tsavo West and Tsavo East and it is famous for its huge of lions; christened the man-eaters of Tsavo. The lions of Tsavo have been described in a book titled 'Man-eaters of Tsavo and other East African Adventures' written by John Henry Patterson.

Tsavo boasts a large herds of elephant especially in its east segment. Tsavo West is, on the other hand, filled with crocodiles, vervet monkeys, antelope, baboons, giraffes and hippos. The national park is located three and a half hours away from Nairobi by road.

Amboseli National Park, sitting on the lower slopes of Mount Kilimanjaro whose peak is across the border in Tanzania, is equally an enchanting destination. The national park offers unforgettable experience to see  Kilimanjaro hovering above the clouds in an early morning. And as the keen photography enthusiast can already imagine, the mountain gives a dramatic backdrop for incredible wildlife pictures.

Amboseli is renowned for its huge elephant herds,  buffalo, black rhino, zebra, wildebeest and other plain animals. Lions and other cats can be seen but are less plentiful here than in the Mara. The park is 3 hours from Nairobi by road and can be approached through Namanga, the border post between Kenya and Tanzania.

The Rift Valley region is also famous among visitors. Lake Nakuru's claim to fame, for instance, is anchored on its flamingo's and the 400+ species of birds found here. The soda lake sitting on the floor of the Great Rift Valley appears ringed in pink as hundreds of thousands of rosy pink flamingos hover on the water. Lake Nakuru is also host to a sanctuary for the endangered black and white rhino. Lions, Rothschild's giraffe, buffalo and baboons are all residents here. The park is the most accessible of Kenya's bigger national parks and is only two hours from Nairobi by road, with the picturesque Rift Valley View Point along the way.

The Central region is also popular, partly because of the breathtaking Aberdares National Park and because it hosts the world-famous tree hotels; The Ark and Treetops. Students of the history of the British royal family will recall that it was at the Treetops in 1952, where the then Princess Elizabeth was staying on honeymoon when her father, King George V, died. She descended from Treetops to assume the backbreaking role of presiding over the far-flung dominions and colonies of the empire. If you stay at the Treetops you are bound to meet with some of her fans.

Aberdares has a diverse topography that includes waterfalls, rain forests and the rivers that supply water to Nairobi's millions. The flora and fauna is quite unique and is not found elsewhere in the country, expect on Mount Kenya. Leopard, elephant, rhino and the rare bongo can all be found here. However, dense vegetation and inclement weather makes it difficult to spot animals although elephants and buffaloes can always be spotted at the floodlit waterholes of the two tree hotels.

Kenya is a year round safari destination. The rains come around April- May and November-December and they do not much affect the travelers' ability to get around, except for the heavily forested Aberdares. In the wet season the roads in the Aberdares are extremely slippery and the park is at times actually closed down.

Generally the best time to go on safari is over the drier months when the grass is short and sighting animals is so much easier. But in areas such as the Mara, the animals are so plentiful that you are going to see lots of them regardless of the season. The peak tourist season falls around January to February and July to August. April to June is the low season and prices for accommodation in the lodges can be as much as 40% lower than in the high season.

Accommodation on safari varies from basic camping to luxury lodges and tented camps. Out there in the bush, you will be pleasantly surprised that all the trimmings of 5 star accommodations are available. But if you want to rough it out, you will find campsites in almost all the game reserves and national parks.

It is generally recommended to take an escorted tour package that includes transport, park fees and accommodation. The reason for this is that the tour guides are usually well versed about the animals, where to find them and how to get there and have other such useful local knowledge.

This article has been read 9,585 times
COMMENTS