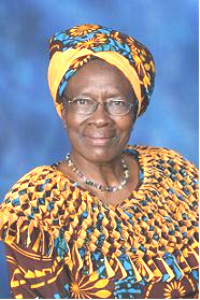 Role: Development specialist, advisor on health and youth empowerment.Co-founder and the first Chairperson of UZIMA Foundation

Professor Miriam K. Were is the current chairperson of the National AIDS Control Council (NACC) Kenya, under the Office of the President,  which coordinates the national HIV/AIDS response in Kenya. She is also the serving Chairperson of the African Medical and Research Foundation (AMREF) Board. Miriam also serves on the Advisory Board of the Kenya Anti Corruption Commission (KACC) as well as on the MAP International Board of Directors based in Georgia, USA, amongst others.

Miriam was Director of the United Nations Population Fund Country Support Team (UNFPA/CST) for East and Central Africa and Anglophone West Africa, based in Addis Ababa, Ethiopia. Prior to that she was the World Health Organization (WHO) Representative and Chief of Mission in Ethiopia. Before WHO, she was Chief of Health and Nutrition in UNICEF, Ethiopia. Miriam was recruited to UNICEF from the Department of Community Health in the Faculty of Medicine, University of Nairobi where she was Head of Department. While in the Department, she initiated the Community-Based Health Care (CBHC) project in Kakamega of which she was the Director in the period 1976 to 1982. This project won the UNICEF Maurice Pate Award of 1978, the first time an African institution had won this award.

With a degree in Natural Sciences and postgraduate Diploma in Education she taught high school chemistry and biology before medical studies. Miriam qualified as a medical doctor from the University of Nairobi. Subsequently, she obtained both the MPH and Doctor of Public Health from the Johns Hopkins University in USA.

Her work has been recognized both locally and globally. She has received several citations that include Kenya’s Elder of the Order of the Burning Spear (EBS) and Medal of the Italian Cabinet awarded by the Pio ManzÃ Centre in recognition of the life-long involvement in working with disadvantaged people for the improvement of the quality of their lives. It is this concern that led her and her husband, Humphreys, to initiate events that led to the founding of UZIMA Foundation Africa.

France' President Nicholas Sarkozy recently signed a decree conferring upon Prof. Were the title of Knight in the National Order of the Legion of Honour.This award is considered the highest decoration in France.

For more information about Prof Were, visit:
http://uzimafoundation.org/main/about/our-leadership/mkwere/

This article has been read 11,824 times
COMMENTS