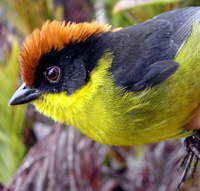 In a recent tour to Kinangop in ’s Rift Valley, Mary Mwenda, a presenter with Trans World Radio caught up with Dominic Kimani an Ornithologist with the Kenya National Museums and filed this story.

Mary: To start with, how long have you been working as an ornithologist?

Dominic: For eight years now, since 2000. Before that, I developed an interest in birds when Dr.Bennun used to visit my school in Kinangop. was head of Ornithology at the Kenya National Museums then. Currently, he is at Birdlife International. My interest for birds developed more and I started a club of twenty pupils who specialized in bird watching and identification.

Mary: Bird watching seems to be a new concept in many African communities. What was the reaction of your parents when they discovered you had an interest in birding.

Dominic: At first, my parents were against it; they even made arrangements for me to study Veterinary sciences but I stood firm and refused. Somehow my dad started appreciating what I was doing.

Mary: Why is Ornithology important to the community?

Dominic: The study of birds has been popular for a long time. Currently, many people are generating their income from birds and related activities. Local communities have benefited from ecotourism in various places in . In Kinangop, Nature Kenya, a Birdlife International partner is working with the local community to save endangered grassland birds like Sharpe’s Longclaw (Macronyx sharpie) and Aberdare (Cisiticola, Cisticola Aberdare.) Through such activities, the local community, has acquired some beehives to substitute cultivation which is a threat to grassland birds. There are other income generating activities like wool spinning that have come along with the study of birds. Personally I earn my daily bread through the study of birds.

Mary: How does the African society perceive Ethno-Ornithology?

Dominic: Indigenous knowledge systems are vital for making sound decisions on natural resource utilization. In African tradition, birds had a special place. With Agikuyu, Augur Buzzard, Buteo augur was considered a lucky bird. If spotted; one knew that he would be lucky that day. On the other hand, some cultural beliefs against some birds like owls do exist. This accelerates their persecution. The hooting of an Owl is considered a bad omen that can result in death or crop failure in some communities. Generally, there is lack of enough research on Ethno-Ornitholology to document this important relationship.

Mary: What is happening to the birds’ habitats in and the world over?

Dominic: ’s biodiversity is under serious threat; the high population growth experienced in the last few years is putting pressure on the environment. Poor people are forced to use natural resources unsustainably. The natural habitats where animals can live are disappearing at an alarming rate. This is triggered by human need for space to build houses and grow food among others. Globally the rate of habitat loss is astounding.

Mary: How many bird species are in and the entire world?

Dominic : is one of the richest avifauna in the world, with over 1092 species recorded to date. This list makes Kenya the second highest in , only four species short of Democratic Republic of Congo, a country almost four times larger. In the entire world, we have well over 9,000 species.

Mary: What is the economic importance of birds?

Dominic:  Large numbers of tourists are now not focusing their attention to the ‘big five’ but on birds too. Following this, a lot of tour companies deal with bird tourism (Avi-tourism). This generates money for the people working in this industry and the local community where the activity is taking place.

Mary: Are there any endangered bird species in ?

Dominic: Yes. A good example is Sharpe’s Longclaw, Macronyx sharpei. This bird is only found in ’s highland montane grassland. Kinangop is thought to be the world’s stronghold of this species.

Mary: Why do you think flamingoes are declining from Nakuru or moving to other Lakes?

Dominic: In Nakuru, the conflict between conservation and development has not been resolved for a long time. Industrial growth in Nakuru directly affects the lake’s ecology. Treatment of waste water entering the lake from the town seems inadequate. Nearly half the water catchments areas are under cultivation. My personal observation has revealed that both Lesser and Greater Flamingoes wash in the river mouths or springs. If the catchments are destroyed, the river dries up and hence flamingoes can’t take a bath. Bathing enables the flamingos to fly efficiently as they are always mobile. ’s ecology is considered by scientists to have a very fragile population of Spirulina (Lesser Flamingoes’ food). This is also dwindling because it can only be supported under specific conditions.

Mary: Apart from Ornithology, do you have other area of interest?

Dominic: I also spend time conducting environmental education in schools and local communities. I also do professional tour guiding within Rift Valley lakes in Kenya and .

This article has been read 2,288 times
COMMENTS