Why the Hague is Kenya's Better Option 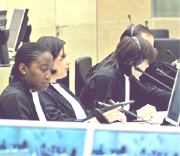 The Kenyan parliament has voted to send perpetrators of the 2007 post-election violence to the International Criminal Court in The Hague.

The constitution amendment bill intended to create a local tribunal required two thirds majority to pass but it failed. This is in spite of the presence in parliament of the two principals in the Grand Coalition government, President Mwai Kibaki and Prime Minister Raila Odinga.

First, this was a slap on the face of the leadership of the Grand Coalition government. MPs are saying that they can have their way even when that goes against their party leaders. This assertion by parliament is a major contrast from other past parliaments, especially under Jomo Kenyatta and Daniel Arap Moi. Then, it was near suicidal to contemplate going against the national leadership. Notable victims of this include Martin Shikuku, Chelagat Mutai, George Anyona, Jean Marie Seroney, and many others.

One can only guess the MPs’ motivation in this action. Chatter among Kenyans suggests many reasons. There are some that hope that The Hague process, given how lengthy it can be, could allow those accused to “escape” the wheels of justice. Others want it for the exact opposite reason: they have no confidence that local institutions can guarantee justice and hence prefer that this justice is dispensed elsewhere; in this case, .

In the end, it boils to the lack of confidence in local institutions to realize needed justice and tame impunity. This is not an accidental view as confidence in local institutions has been eroding over time as our history demonstrates. The country has seen tribunals, select committees and commissions of inquiry in action, conducting elaborate hearings, and composing meticulous reports complete with reasonable recommendations for action. In almost all cases, recommendations haven’t seen the light of day.

When popular MP for Nyandarua North, JM Kariuki, was murdered back in 1975, parliament moved into action and created a Parliamentary Select Committee to investigate the heinous crime. They held hearings and composed a report with recommendations for investigation and prosecution of key suspects. No action was taken then and, to date, there hasn’t been justice in this atrocity!

As well, throughout the Moi era, we witnessed a number of commissions of inquiry whose recommendations continue to gather dust wherever the reposts are filed. When Foreign Minister, MP for Kisumu Rural, Dr Robert Ouko was killed, the government did what it knows best to do: create an inquiry. This Commission of Inquiry held hearing across the country, amid resistance and lack of cooperation from those in power. Allegations surfaced that the government was wiretapping commissioners’ private conversations. And even before the Inquiry completed hearings, its work was stopped abruptly with then president suggesting that it had enough to write a report.

A report did follow, along with recommendations. As with the JM Select Committee report, government failed to take action. To date, no justice can said to have been done with respect to the murder of Dr Robert Ouko. Indeed, no justice may ever be done in this case as most witnesses have died; some dying under mysterious circumstances. Members of parliament did revisit the Ouko murder during the NARCC administration. They created a Parliamentary Select Committee to examine the matter. It too wrote a report and made recommendations, which have never seen the light of day! There is more.

In the 1990s, following the coming of multiparty democracy, there were politically-engineered ethnic clashes, especially in the Rift Valley and Coast provinces. Thereafter, the president appointed a Commission of Inquiry on land clashes. Justice Akiwumi and his team held hearing, wrote a report and made recommendations. Those too haven’t seen the light of day!

Around the same time the government appeared committed to dealing with matters of land in Kenya. Land is central to many problems in the country, aggravated by the amount of graft and corruption that has bedevilled its acquisition. The rush for land and accompanying mania added a newt term to Kenyan lingo: grabiosis, which describes mania-like intent on grabbing anything (especially land) that can be reached, be it legal or otherwise.

Ndung’u report was the result of this exercise. The report was said to be so explosive it wasn’t made public. Indeed, some key politicians went to court to challenge its publication. In the last election there was debate on the merits and demerits of implementing the report with Orange Democratic Party (ODM) committing to implementing it! That report’s recommendations remain only that: recommendations; they too may never see the light of day!

In 2002 Kenyans elected a government that promised to deal with corruption and “put the country to work”. President Kibaki in his inaugural address promised to create a working nation in which Kenyans earned what they had worked for. Corruption will be targeted and dealt with. He even appointed an Ethnic Czar, John Githongo!

As well, the president created a Commission of Inquiry, under Justice Bosire, to tackle the matter of Goldenberg, perhaps the biggest corruption in the country at the time. As usual, hearings proceeded and a report with recommendations was made! That too has not seen the light of day! (A similar fate befell recommendations on Truth, Justice and Reconciliation!)

Worse still, the NARC regime fell out with its Ethics Czar who had to reign in a huff while on a visit overseas! This demonstrated the lack of willing to tackle corruption by the regime. And corruption, and grand corruption at that, continues to grow by leaps and bounds!

Perhaps the greatest demonstration of lack of confidence in national institutions (especially the judiciary) happened following the debacle of the last presidential elections. The aggrieved party, ODM, refused to go to court claiming that the system was stacked by President Kibaki’s cronies! This action possibly worsened the degree of clashes that followed the debacle.

It is ironic that many that expressed lack of confidence in the Kenyan judiciary now favour a local tribunal rather than The Hague. issue may never have arisen had the governments (under Kenyatta, Moi and Kibaki) addressed issues in a timely manner. For example, it is possible that post-election clashes of 2008 could have been averted has

the government implemented both the Akiwumi and Ndungu reports. It is also possible that had government record been stellar with respect to previous recommendations, MPs would have voted for creation of a local tribunal.

I am not proud that my country will be subjected to The Hague process! It makes us look like banana republic, the equivalent of a failed state whose business becomes everyone’s business! All being the result of failing to put our house in order! Unfortunate as it may seem, many Kenyans empathize with the outcome of the vote. For one, we have tried the local route before with no results. The number of commissions of inquiry and lack of follow up has eroded confidence in our ability to carry through with respect to matters of justice. The vote simply says that Kenyans have been down this path before; they have seen the “movie” and it is silly to attempt the same thing all over again, knowing well the possible outcome.

Conclusion: Kenyans want to try something else. In Ekegusii we say: gakiaborire ‘nchera maate kerigerie ‘nchera rogoro - literary translated: when you are looking for something and you cannot find it on one side of the road, try the other side! Kenyans are trying the “other side of the road”, the Hague alternative; and it may be due to exasperation with local institutions!

The Hague may not bring ultimate justice as desirable. Given it is lengthy it is not likely to be timely in action. And we know that justice delayed is justice denied!

Matunda Nyanchama  matunda@matunda.org is an Information Security professional based in Canada.

This article has been read 2,170 times
COMMENTS