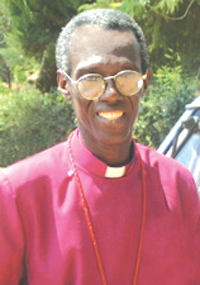 Bishop Eliud Wabukala is archbishop elect of the Anglican Church of Kenya (ACK) – the largest Protestant denomination in Kenya with a membership of around 5,000,000. The establishment of the Anglican Church in Kenya goes back to the modern introduction of Christianity in the country. This started with the work of Johann Ludwig Krapf (1810 – 1881) a southwest German Lutheran in the service of Church Missionary Society (CMS). He arrived on the eastern Coast of Africa in 1844. An earlier attempt in the middle ages by Portuguese explorers and missionaries of the Roman Catholic persuasion was futile. The symbol of this early attempt, Fort Jesus, was erected between 1593 and 1596 but little other evidence of this contact remains.

The Anglican Church of Kenya originates from the Church of England. The Church of England is the established church in Britain. The established church acts as the spiritual arm of the ruling monarch in England. It is important to note that this phenomenon did not originate with the English but with Emperor Constantine. Around AD313, Constantine legalized Christianity and made it the official state religion. During colonial period, the Anglican Church (AC) was loosely the established church as so far as church-state relations were concerned. This may explain the proximity between archbishop’s residence and statehouse in Nairobi.  The archbishop’s residence was constructed a stone throw away in order to give the governor and the archbishop amble access to one another for consultations and spiritual rites.

In independent Kenya, there has not been an established church – at least not in the official sense of the word. However, the church where the sitting president is on their nominal role has in reality assumed the established church status – again, not officially. During the reign of President Kenyatta, the Catholic Church enjoyed stately privileges as did the African Inland Church (AIC) in the Moi Era. In President Kibaki’s democratic first term in office, the Catholic Church once again played the sacramental arm of government.

Bishop Wabukala comes on the scene during the unholy matrimony between the Catholic and Protestant churches in trying to play the established church. This is practically an impossible union as it attempts to bring together perceived reformists and anti-reformists. The so called Government of National Unity (GNU) is a contradiction in terms as we witness lack of unity in governance. Yet, it is at this time that we congratulate Bishop Wabukala. In equally difficult times in the reign of King Xerxes, Mordecai reminded Queen Esther to make the best of the opportunity.

Not very long ago, the Anglican Church of Kenya (then Church of the Province of Kenya) was referred to as the “Church of the Politics of Kenya.” This was befitting at that time especially under the ‘prophetic’ Bishop Gitari. Bishop Gitari was on the frontline in criticising President Moi’s so called draconian rule. This political agitation largely stopped once President Moi was out of office. Consequently, some commentators have faulted the church for playing tribal politics and thus fuelling tribal animosity in Kenya.

Bishop Wabukala takes over from Archbishop Benjamin Nzimbi. Archbishop Nzimbi has achieved a lot for the church during his term. For instance, he is hailed for re-establishing the otherwise eroded integrity of the institution of marriage. However, his leadership has faced enormous challenges. These challenges were by no means restricted to the Anglican Church. In the recent past, many church leaders in Kenya have squandered rare opportunities to provide leadership and have instead been sucked in regional alignments.

Church leadership was found wanting during the Referendum on the proposed new constitution of Kenya in 2005. The Referendum polarised the nation into “oranges” and “bananas” and a win by the “Orange” side greatly spelt danger for the status quo. The exercise was reduced to a contest between the citizens against their elected government. The catalyst for the contest is said to have been dishonest political leadership by the executive. A similar leadership void was also experienced in the run up to the disgraceful botched 2007 general elections – the worst moment in our history as a nation. Church leaders either literally sat on the fence and watched the flock trample each other or took sides as they participated in the contest.

On these two occasions, many church leaders abandoned us to our own consciences – a phrase often used by those who desire to remain politically correct when called upon to make a stand. Unlike some cardinal fathers in the Catholic fraternity who pulled with the status quo, the Anglican believers were asked to consult with their consciences. It may have been the right thing to say or to do but, as expected, it was a vehicle to disaster. It is important to remember that our consciences are informed by our corrupted nature and nurture. We need religion and religious leaders because we believe our consciences are warped and in need of repentance. If our consciences were anything to go by, religion would essentially be irrelevant.

Bishop Wabukala comes on the scene at a time when the politicians have messed the country with their dishonest dealings, empty rhetoric and continuous squabbles. These feed the common perception that the contest is between central province verses the rest of the country. Ugly stereotypes have been engaged to reinforce this unfortunate perception. In fact, some have argued that Bishop Wabukala’s election was, to some degree, informed by the current political alignments in Kenya. The popular political perception in the country is said to have come to the surface during this elections. Bishop Wabukala was in the race against candidates from perceived Orange Democratic Movement (ODM) ardent support areas of Nyanza and Rift Valley and a perceived Party of National Unity (PNU) preferred candidate from the greater Eastern region. The candidate representing the later region is also said to have been encouraged by the incumbent archbishop. Therefore, Bishop Wabukala is the best compromise candidate politically speaking.

Nevertheless, Bishop Wabukala must not be understood politically or prejudged by the failures of his predecessors or contemporaries. I first met him as an ordinand when I joined St. Paul's United Theological College, now St. Paul's University, Limuru where he was a senior lecturer. He is an accomplished yet humble pastor-teacher. He brings a wealth of rigorous academic study and enviable ministry experience to the office of the archbishop. He has also led his Diocese of Bungoma well and no issues have been reported about an insatiable desire for neither petty cash nor petticoats.

I wish Bishop Wabukala well as he takes up the leadership of the Anglican Church of Kenya. I hope and pray that he will remain true to the Holy Script to rebuke, to lead, to encourage, to comfort but more importantly, to preach reconciliation. I hope that under him the law of love will reign in the church and, by extension, in the greatly divided and suspicious society. The law of love is the mainstay of what it means to be a church. Bishop Wabukala cannot afford the usual politics of division – the times do not give him this option.

Last but not least, Bishop Wabukala cannot afford to abandon his parishioners to their own consciences or to the worldly rule by the corruptible and corrupt politicians. I hope that he will engage with the challenges that face our country and our world today. Certainly, there will be those in opposition to his leadership but the purpose is to be right and persistent. To entrust believers to their own consciences or assume that politicians in Kenya will suddenly shun selfishness and greed undermines service which is the duty and privilege of church leadership.

Director of Programs, Africa Institute for Contemporary Missions and Research (AICMAR) writing from Cape Town. The views expressed here do not necessarily reflect the position of AICMAR.

This article has been read 2,489 times
COMMENTS