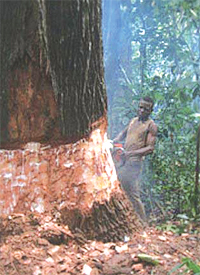 The European Union and the Government of the Republic of Congo announced a new agreement that for the first time establishes a system to ensure wood products exported from the Republic of Congo to the EU contain no illegally harvested timber and are derived from managed forests that benefit local communities.

The Republic of Congo, also known as Congo-Brazzaville, exports about USD$330 million annually in timber and timber products, about half of which are purchased by EU countries. Italy, Spain, Portugal, France, Germany, the Netherlands and Belgium are the principle EU importers.  But it has been difficult to confirm whether the wood products coming into the EU from Republic of Congo have been derived from timber harvested in accordance with national laws and that the benefits from timber sales are shared with forest communities.

“With a total of 4,674,320 acres of certified forests as of  March 2009, Congo has reached the highest echelon of tropical wood producing countries and is becoming a laboratory for sustainable forest management,” says Henri Djombo, Congo’s Minister of Forest Economy who also holds that the conclusion of this agreement will guarantee new opportunities in timber markets  while participating in reinforcing governance in that sector and illustrating Congo’s political commitment to work in that direction.

The accord  announced on May 9 2009 in Brazzaville is a legally binding bilateral pact known as a Voluntary Partnership Agreement or VPA—an instrument that emerged from the European Commission’s 2003 Action Plan on Forest Law Enforcement, Governance and Trade (FLEGT) that is designed to halt the flow of illegal timber into EU markets. It is the culmination of several years of work between the EU, the government of Republic of Congo, and civil society groups that, rather than impose EU standards, allows the national government and various stakeholder groups to establish their own system for defining and enforcing legal requirements for timber sales.

"With measures in place to strengthen control of the legality of wood on the ground, enforcement, the agreement contains strong elements that will reassure European consumers of the origin of timber imported from the Republic of Congo, "says Stefano Manservisi, Director General for Development, European Commission. This is expected to reinforce efforts undertaken in recent years by the Republic of Congo to sustainably manage forests and will permit the development of a legal and profitable trade between the EU and the Republic of Congo.

The World Bank estimates that insufficient regulation of timber production is currently costing Republic of Congo millions annually in lost revenue. While the country is now heavily dependent on oil exports for revenue, in February, the World Bank warned that oil revenues in the Republic of Congo will soon sharply decline. Such a drop would put more pressure on forests in the fragile Congo Basin—the world’s second largest tropical forest—to provide much needed export earnings, thus boosting the incentive for illegal harvests.

Under the new agreement, starting in 2011, all timber and timber products entering the EU from Republic of Congo will carry a license showing that they contain legally harvested and sold wood and that they have been obtained in a manner that maintains the health of the country’s forests and provides benefits to local forest communities. The agreement establishes a transparent system for collecting timber taxes and ensuring that timber harvests and sales are in compliance with national law. Meanwhile, the EU has committed to establishing border measures that will exclude unlicensed timber while providing technical assistance to Republic of Congo for enforcement and auditing systems.

Also, to ensure compliance, the agreement includes an extensive “chain of custody” requirement for the independent tracking of all timber shipments at each point in production, from the felling of trees in the forests to their transport to saw mills to their arrival at the point of export.  In addition, the VPA process has created a mechanism that for the first time is allowing civil society groups in Republic of Congo to participate directly in shaping laws and policies on forest governance and monitoring industrial logging operations.

The VPA with Republic of Congo is the first in the Congo Basin and the second in a series of bilateral accords being negotiated between the EU and timber producing countries. A VPA between the EU and Ghana was announced in September of 2008 and negotiations are underway to develop agreements with Cameroon, Liberia, Malaysia, Indonesia and Vietnam. In addition, preliminary discussions have begun with the Government of Gabon, and Central African Republic has also expressed interest in negotiating deals.

“There is much work that remains to be done, but we believe a framework has been established with the potential to give local communities in Republic of Congo unprecedented influence over to what happens to the forests that are so critical to their survival and their culture,” says Roch Euloge N’Zobo, Programme Director of the Congolese Observer for the Rights of Man (OCDH), an NGO that has been involved in the VPA negotiations. “A mechanism has been put in place that will bring civil society, government, local groups, independent monitors and European regulators to the table, and this gives us hope that local forest peoples will be heard, their rights respected, and their concerns addressed.”

Although the VPA only covers trade with the EU, officials in the Republic of Congo have indicated they will apply the licensing provisions and intensive level of oversight prescribed by the pact to all timber exported from the country. Such a move has the potential to increase oversight of the rapidly growing exports of tropical logs to China from timber operations in the southern part of the country, where questions have been raised about the legality and sustainability of logging concessions.

Raw log exports are generally viewed as undesirable because they provide relatively paltry domestic revenues compared to milled or “sawn” timber and are considered by forestry experts as much more likely to encourage unsustainable harvests. Today, more than 70 percent of exports to the EU from Republic of Congo are sawn wood. However, the rapid growth in timber exports to China—from USD$3 million worth of wood in 2000 to USD$130 million in 2007—has mainly involved logs.

According to Rachel Butler, Head of Sustainability for UK Timber Trade Federation, which represents the UK wood and wood products industry, British Traders congratulate the Government of the Republic of Congo and the European Commission on their progress, which will make it easier for companies to be sure of the legality of products they buy from Congo Brazzaville.  "We have always welcomed the EU FLEGT Action Plan and in particular the EU’s recently proposed Due Diligence Regulation. This regulation will support our quest for a level playing field in the market, encouraging buyers to purchase legal timber, and therefore supporting producers who act responsibly," she says.

Beyond VPAs, the FLEGT Action Plan also includes EU commitments to require legal and sustainable wood for government purchasing in Member States, and a (as yet undefined) legislative measure to increase risks associated with importing wood from unknown, potentially illegal, sources.  Legal and sustainable public purchasing requirements have been taken into national policy by Belgium, Denmark, France, Germany, the Netherlands and the UK. Public procurement of timber and wood products is thought to account for up to 20 percent of the total EU market. The EU is developing legislation to further reinforce these partnership agreements, which is expected to complement the recent revision of the US Lacey Act, making the import and sale of illegal wood products illegal under US law.

The European Forest Institute (EFI) is funded by the European Commission and the Governments of the UK and Finland to provide technical support to the preparation, negotiation and implementation of FLEGT Voluntary Partnership Agreements in a number of tropical forest countries. EFI is an international organisation established by European States. It is the leading institution conducting and advocating forest research and facilitating forest research networking at the pan-European level.