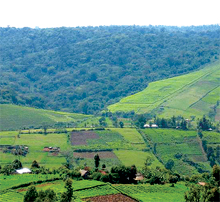 Is this a government of the rich governed by the rich? This is a question that many are asking. As Kenyans waited for the disclosure of who the beneficiaries of land allotments in the controversial Mau forest were, the cat was finally let out of the bag when 25 powerful individuals who allegedly received 500 hectares of land in the crucial water tower were named in an official report. As with other  government reports, things have turned to business as usual.

The Mau forest politicking has come to the fore yet again with former Baringo Central Member of Parliament Gideon Moi saying that the Migingo issue was being used to divert attention from the Mau saga. Being a beneficiary of large chunks of land in the expansive Mau forest as alleged by findings of a commission that probed into the Mau saga, one wonders what was up his sleeve. Gideon Moi and company love the Mau debate because they subdivided part of the land and sold it to many unsuspecting squatters whom they now want to use as a political weapon for political mileage.

The well orchestrated scheme is to make the poor become poorer by making those who are employed in industries that depend on water and electricity from the Mau complex loose their source of livehood once the rivers dry up and thus get trapped in poverty and be left at the mercy of politicians. If the effects of the 2007 post election clashes are anything to go by, the writing is already on the wall and soon, they will pay for their sins in The Hague.

Mau is a water catchment area, therefore it would be suicidal for people to continue dilapidating this scarce resource that feeds the Masai cattle which is their lifeline. Instead of going slow on this issue for fear of being rejected by voters, the government should educate the masses about the danger of destroying the forest and the 25 powerful individuals should be locked up in prison to face charges. This is because their actions are a complete breakdown of the rule of law and order in land allocation for they acted with impunity and in total disregard to wider social, economic, ecological and development interests of this country.

Does it mean each successive regime will have to go slow on issues of corruption committed by their predecessor for the sake of not stepping on the supporters of the culprits? The Mau forest saga  unlike other scandals that have seemingly been  forgotten and the perpetrators let off the hook is not going to leave us. It stands out not because of the audacity of its schemers but because of its potential threat to Kenya as a nation and its threat to the economic livelihood of millions of people.

As the 12 rivers which sustain five lakes dry up due to the destruction of the forest, industries that depend on these rivers for electricity and water supply and have employed millions of people are in danger of closing up. While political elites who are against Mau evictions can afford to live in posh urban homes with availability of all amenities, it’s the rural poor who are going to face the brunt of food shortage and starvation when the waters finally dry up.

The Mau is the source of over 70% of the water flowing into Lake Victoria, from the Mau flows the life blood of the Maasai Mara National reserve. Millions of flamingos that grace Lake Nakuru National Park depend on the waters that flow from the complex. Millions of farmers depend on the Mau for their very survival because of the rivers that flow from there.

The effects of the merciless takeover by the so called powerful individuals are already apparent. The ever green Kericho town is now experiencing water shortages and residents have to contend with rationing. Political Leaders are behind the grabbing of Mau and the decimation of its life nurturing ecosystem. But by sharing the land with thousands of peasants, they have managed to ensure that the real victims of the destruction will fight to retain their tiny pieces of land that will soon be unproductive as the rains lessen and the local rivers dry up.

The youth of this nation need to stand up and safeguard their destiny rather than  be misused by leaders purporting that the Mau saga is a tribal issue. Is it only the Kalenjin who work in the many industries that depend on the Mau as their lifeblood? When will they have the interests of their grand and great grandchildren at heart?

Politicians fighting to kill the Mau should be charged with treason. Our destiny is in our hands: we either choose to break or make it.

The author is a freelance journalist based in Nairobi.

This article has been read 2,847 times
COMMENTS