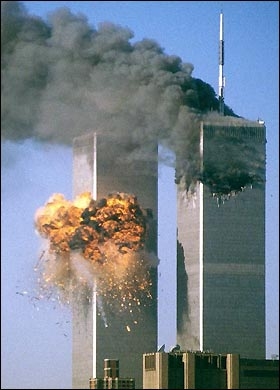 What will cure and rid the world of hate that orchestrated 9-11? It is for the leadership of nations to make conscious effort not to demean another no matter their circumstance. It is a thing of 'false' pride and foolishness laced with high degree of stupidity when some in US take the high roads demeaning nations simply on the grounds that their circumstance is different. Who ordained us in US as the jury and judge of what is right and wrong about other people? Have we in US solved all problems confronting us?

Before we seek to remove the speck in others' eyes, we must first remove those in our eyes. Can one reasonably give of themselves what they do not have in the first place? My answer is a resounding NO. Doing so, is falsehood that is soon discovered.

The world is aware of US shortcomings and no longer is it led by the nose or blinded to the 'holier than thou' stance of the . US and the world must level. We must see each other as equals, never to 'dictate.' Though endowed differently, no one endowment is superior. President Obama is right. His administration shall never dictate to the world. But will seek ways to cooperate and collaborate on mutually beneficial ventures.

Come to think of it, it was a Muslim nation that first recognized as a nation, and US responded by building its first embassy in that country. Morocco, was the first nation to accord US such recognition and US Embassy in Tangier, stands today as the oldest embassy in the world. Also, the Arab nations have more investments in US than most other sectors of the world, yet the way Muslim nations are treated and at talk, makes one wonder where lies the mutual respect for the benefactor and beneficiary.

One would think Arab nations and people are all bunch of buffoons. Far from the truth! Taking from one hand and on the other insulting the giver, breeds the level of hatred that leads to sad beginning and no ending. No faith is superior to the other. Anyone believing that and hoisting such to the world, is a product of satanic verses. God the creator is not partial and so we must not be partial in our religious belief and judgment of what His wishes are. He created all.

9-11 was a very sad day in the history of and the world, but what led to it? Have we been told truthfully what caused it and the course that led to it?  No more 9-11!!! One was more than enough. Peace to all [wo]men of 'Goodwill' who are driven by respect for another rather than by what faith one has.

In the reaction to address the 9-11 aftermath, we got into a war that initially we were told was going to be over in matter of weeks. Years afterwards, no one including the avid experts that pointed to superior American firepower, are yet to see an end to the endless and senseless wars.

Nations need not demean another and in so doing categorize the world into more insulting classes such as 'third' world. Such has the undertone of 'disrespect' that emanate from such distinction. We know of the 'third' world. But have we ever heard of nations that are in 'second' world? You go figure.

No one will enjoy a neighborly respect or peace if they constantly oppress their neighbors reminding them of how rich and powerful they are, with a 'mine-is-right' attitude. As we remind ourselves of the unfortunate incident of 9-11, we must all make the effort to treat people with respect, and no matter their present circumstance, no condition is permanent.

A so-called 'third' world may one day become 'first' world, and a once first become last. Empires do not last forever, and often, an 'Emperor' is blinded by their own imagined but often unreal power as they descend fast from their 'ivory' tower/throne with disgrace. Pride they say goes before a fall.The dynamic nature of people and their resolve to better their circumstance are such that the human spirit is an unquenchable fire, and no man-made power due to superior weapon system can put out or subdue such spirit.

is a product of all, and despite the claim of some to make it look like it belongs to them, this country is great because we all pull from various angles and no matter how small that pull is, it adds to the strength of the country. When we dissolve into loving each, respecting each and eliminating the superior and first nation status/attitude, our neighbors will have no option than to extend us courtesies and peaceful co-existence that is the hallmark of good living. As Ms. Franklin sang in her famous song - R-E-S-P-E-C-T can never be supplanted but must be complimentary for all human beings to enjoy happy lives. The dream and pursuit of happiness, is not the exclusive preserve of any one nation or race: We all want what is good for us and others like us and different from us. Diversity is the spice of life and we must encourage and promote such.

May the good Lord Bless and all Others because they too want Blessings. This Igbo saying is proper here: Ka chi gozie okwu! Onye nweanyi nonyelu unu; nonyelu kwagi! Translation: May the good Lord bless this word and also be with you and us.

This article has been read 2,445 times
COMMENTS