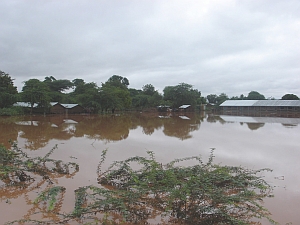 A Phenomenon which makes fish disappear from any part of the geographical ocean, even though temporarily, is a hazard worth preparing for.

El Nino, the much anticipated havoc bearing weather patterns is impending. When it arrives, it will come with amongst others; tremendous torrential rains, warm temperatures, vectors for spreading diseases, diseases, and most importantly for policy makers, destruction. The latter has in the past caught the attention of governments.

Kenya lies on the equatorial belt and will not escape the route of El-Nino. To some extent, damage control measures are already in existence: Wooden structures have been erected in Budalangi, Sigiri, Emunde, and Mudembi alongside calling upon  UNICEF to stand by with food rations.

Unfortunately, that is where preparations have ended. Policy makers particularly involved in agriculture, town planning, human settlements, forests, and importantly aquaculture, have showed little evidence of exercising their willingness to plan to harness the energies of El-Nino. Harnessing the energies of El-Nino, much like trapping a genie in a bottle, requires three components to be implemented: Planning (and monitoring and evaluation); impact (and risk assessment); and management of water.

Africa will continue to struggle to harvest water  unless forward thinking, and planning is integrated into sustainable livelihood of small to medium scale farmers. The paradox of urban versus rural living makes a two faced strategy of harnessing El-Nino a priority for the government.

Strategies which should be adapted for urban dwellings include: discharging the precipitate quickly and efficiently into waterways away from areas of zero-absorbance, to get rid of the water; unclogging drainage pipes and overflow gutters in the dry season in preparation for the wet season; digging channels to direct water to rivers and streams which will minimize erosion, death, property loss; preservation of wetland ecosystems that absorb and purify water in low lying areas; beautification programs that are “green friendly” (as opposed to bare stones and substituting trees for shrubs); and removal of contamination including potential sewerage leakages, overflows and burst piping, and toxic waste which may render underground water systems unusable. Once this commodity moves away from the urban area, it transforms itself into a life saving opportunity.

In the rural setting, uncontaminated water must be collected in a clean way and stored away from contaminants till further use. This has been the greatest challenge to Africa, and so far, only two major ways have been proven effective and efficient. The first is the use of dams which remain open and exposed to not only health hazards including a variety of insect vectors, disease exposure and drowning hazards, but most importantly for smaller dams, a large surface creates a caveat upon which losses are incurred though excessive evaporation. The laws of hydrodynamics show quite clearly that in order to maintain a dam with a certain capacity of water, either an inlet has to be provided, which in many cases the water inflow ceases after the rain season, or the evaporation from the water surface needs to be minimized which is more often than not the case with small dams, irrespective of how good the intention of maintaining the water was (losses to ground draining notwithstanding).

The second area of water catchment management is that of providing a durable container until further use. It demands slightly higher capital, but is more effective in terms of securing the water for the future. This may sound like common sense, but government planning authorities find it difficult to make the distinction between the two systems. The water can either be collected on land or solid surfaces as run off, or as is becoming more common in Southern Africa, the water can be pumped into storage from an area where silt, stones and other debris has been naturally removed during the rainy season which does not last beyond a calendar month. The collection vessel creates the next challenge and with the advent of plastic moldings, this has helped to alleviate costs in concrete wall constructions. However, durability is in itself a point which must be considered.

In parts of southern Africa and West Africa, underground water storage is becoming the norm in poor rural communities. The construction is waterproof fiberglass or concrete, and a tin roof, or aluminum sheeting (or fiberglass) placed as a cover only appearing roughly two or so meters above the ground level. Above ground tanks have proved not to last and maintenance is costly due to water pressure from big loads. These tanks characteristically hold up to 250,000 liters of water.

Drip irrigation is key in conserving water.Water is only used for the roots of the crop in cultivation, not only to conserve it, but also to minimize much hard back-breaking work in the sun of uprooting weeds and exposing the ground to unnecessary evaporation of moisture.

The use of other conservation strategies are also important and just to name a few are Zai pits for seedlings, vegetables and underground tubers, and more recently, for tree seedlings, the Pembeni method where three holes are dug in close proximity; one for nitrogen rich manure (animal manure), one is foiled with sawdust which is not too old, and the third is refilled with loosely compacted soil and the seedling added halfway.

Interestingly, the sawdust acts in several advantageous ways: to absorb the water for many days if not weeks whilst slowly releasing enough to the plant thus keeping a nice moist area for the roots. This reduces the need to water the plant; reduces evaporation of the water and moisture loss to the surrounding soil; and the sawdust, whilst the seedling is growing, decomposes to beneficial nutrients and allows the open space for rapid root establishment and development. The loose pit is primarily used to encourage root establishment in the early stages of growth. Seedlings grown in this way establish themselves extremely quickly even in dry areas given that all three holes are ultimately available for tree development. The strategy is also being adapted for vegetable growth although in the preliminary stages of development.

The need to claim (and possibly in future, re-claim) water particularly from the El-Nino, for sustainable use by small and medium scale farmers has never been more urgent. Sufficient and sometimes too much rain pours on African soils, and most flows back to the oceans unused. The time for urgent drafting and implementation of government strategic programs to harvest and manage rain water is overdue. The tools to avoid international embarrassment of begging for food are with us, we only need to use them and our God given brains.

This article has been read 2,538 times
COMMENTS