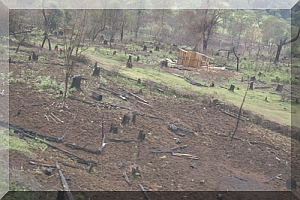 When I read that ’s former president Daniel arap Moi and his cronies will be paid over Kshs 2,000,000,000 as compensation of “their” parcels of land (They grabbed) retaken by the government in Mau water tower, I felt like crying. I asked myself: Who bewitched African rulers and the badly affected hoi polloi?

The value of the land, including tea bushes, is placed at between KShs150, 000 and KSh300, 000 per acre. What is unclear is why the government is willing to pay such hefty money to land grabbers. Is it because some of the grabbers have influence in the current regime? Guess what. In this open rip-off, former president Moi is taking almost a billion shillings!

To rub salt in a wound, the said yokels are not zapped from criss-crossing the country gulling victims (to rally behind them) with their pancake theory that forests do not make rains instead rains make forests! What a farce! What an abuse to their own intelligence! How can an educated person say such things when the whole world is concerned about environmental health? To such people, the future is in their stomach. Their egos supersede the nation!

As this scandal rocks Kenya,  a similar saga is unfolding in the neighbouring Tanzania as villagers in Tanga region accuse former president Benjamin Mkapa for exploiting them (while in power) and grabbing thousands of acres of land after retiring. These two episodes rejuvenate fresh memories of 2007’s carnage when Ugandan strongman Yoweri Museveni attempted to offer Mabira forest to his friends and partners.

Rulers in East Africa have created a very bad legacy with land and economies. Soon, the East African Community will become a cropper thanks to ’s land-related fears. And indeed, being the only country with a big chunk of land in the union, Tanzania seems to stay put to see to it that her land is not used to nourish bad-land policies in other countries especially Kenya.

For long, , sadly, under Jomo Kenyatta, Moi and presently Mwai Kibaki has been

gang raped. Now that has taken very bold steps to reclaim the Mau forest, it needs to do more. Many Kenyans are landless as few settlers and former rulers sit on big tracts of land grabbed from the public thanks to their abuse of power. The dynasty of the founder of , Kenyatta is believed to sit on the land the size of Nyanza province!

As Kenyan authorities reclaim the Mau forest in order to conserve and rejuvenate this water tower, they also ought to reclaim other land parcels stolen from the public by both past and sitting regimes. Without land, the victims will perish even if they have stable supply of water.

If top shots were able to grab thousands of acres on one area such as Mau , what of other fertile areas of ? Was Mau the only area they grabbed? Which other areas were  grabbed?

is 582,650 sq km with a population of over 30 million. Density is 2 settlers per sq. km, while in the rich and fertile western region, population density goes up to 120 settlers per sq. km. This can nicely show you what is going on in . Why should white settlers own bigger land than Kenyans whilst it is openly known that they grabbed the same?

Given that all land owned by who’s who and white settlers in Kenya was grabbed, it won’t amount to breaking law shall the authorities or the people of reclaim it. They know who grabbed their land when and how much. It is time that landless Kenyans must stand up and reclaim their God-given land. Why is able to assure every citizen of the ownership of land whilst can’t?

Without land, nobody can truly belong to the country he calls his. And without this sense of belonging, the affected person will never care about the same. This is why it is easier to recruit rebels in Africa where economies are abused by, and only benefit, the ruling cabal.  Even animals in our national parks are comparably better and boast of belonging and owning the forest they are found in. They’re even more protected than our people thanks to attracting tourists. The other day I was asking why rhinos in are more protected than perishing albinos. The authorities did and have nary bothered to ponder on this question!

Kenyan antelopes, wildebeest and warthogs have more land to live and enjoy than Kenyans. Go to Kajiado just in the outskirts of . You will find that many an antelope has thousands of acres for grazing whilst a Kenyan does not have even an acre! No joke.  This is a real situation. Animals in are more protected than Africans. Even donors are offering more generously when it comes to animals.

Kenyans should see to it that taxpayer’s money does not reward land grabbers.Instead of contemplating to redress criminals however big and honorable, the government should bring them to book. Mau forest must remain a water tower and those saying they have invested in it must be charged for investing on restricted area they obtained illegally.

This article has been read 2,410 times
COMMENTS