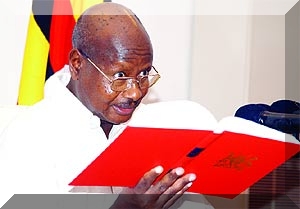 Makerere University is set to honour president Museveni with an honorary PhD in recognition of his “distinguished and outstanding public service as an eminent statesman.” There is an adage which states that “a statesman looks at the next generation while a politician looks at the next election.” Accordingly, a statesman builds for the future as the Makerere University motto states.

On the basis of this adage, I highly doubt whether Uganda’s president is a statesman. In my view, Mr. Museveni is a typical Machiavellian politician. In 1987 during the currency reform, each person that took money for changing lost thirty percent of that money. The government immediately embarked on the unholy Structural Adjustment Programmes (SAPs). Thereafter, Museveni embarked on divestiture of our parastatals, marketing boards, cooperative unions and Uganda Hotels. This was followed by the sale or giveaway of our banks including those that were making huge profits. The NRM government then embarked on giving away public land and this was followed by directly fleecing of the public as was with the case of Concern for Orphans, Widows and the Elderly (COWE). Accordingly, whoever awards Museveni for his superb performance is deluding himself. A statesman builds for the future and doesn’t mortgage his nation.

What does it take for a leader to build for the future?

A leader can build for the future if they made education available, affordable, and accessible to both the rich and the poor. A distinguished, outstanding and eminent statesman fights corruption root and branch. This then ensures that money to equip hospitals with drugs is available; money to pay our medical workers handsomely is available; to build industries and factories, to create jobs for the unemployed is available. I surely wouldn’t honour Museveni as an eminent statesman. Today Museveni’s fight against corruption is cosmetic as it is discriminatory. He at one time said, he has come a long way with Mbabazi and Otafiire and that is why he defends them whenever the duo are in a hot soup.

Museveni has presided over failed state institutions and has done nothing to forestall this. In fact, he is squarely responsible for dysfunctional state institutions. I know the award is being given to him for opportunistic reasons expecting that the president will now fund the university.  This surely casts doubt on the credibility of our university with Professor Venancius Baryamureba as the vice chancellor. We ought to note that it is the obligation of the state to adequately fund its institutions.

It is ironical that Makerere University is awarding the president at a time when university dons have been turned into paupers and they hardly can sponsor their children in a university where they teach. This is the genesis of Professor Baryamureba’s mistakes and I hope it becomes the last. Professor Baryamureba has once threatened to expel students who participate in strikes as if he doesn’t know that it is a form of exercising their rights.

As an alumnus of Makerere University, I am deeply touched that our honorary degrees can be awarded anyhow. An honorary degree should be a prestigious award given to people that have been exemplary not for just boosting people’s curriculum vitae. If it was to be awarded to a leader such as Paul Kagame who has moved his country from scratch to strength, it would be understandable. Possibly, Museveni would learn from Kagame’s award and change from his transactional leadership style to transformational leadership.

During Museveni’s tenure as Uganda’s president, it is rare to give jobs on merit. What works is the spoils system typical of his patronage and clientelism. Today, higher education is a preserve of the rich. The few peasants’ children who by accident attain higher education are condemned to eternal unemployment because jobs are given to children whose parents fought, the cronies and relatives of the powers that be and the National Resistance Movement (NRM) cadres most of whom forge academic credentials from Nasser Road.

Currently, if a parent has four children at the university, the least they can part with is Uganda Shillings 12m a semester. If I were the president, I would turn down the award.

A Ugandan based human rights activist.

This article has been read 2,050 times
COMMENTS