Sudan Intrigues: Will the Center Hold? 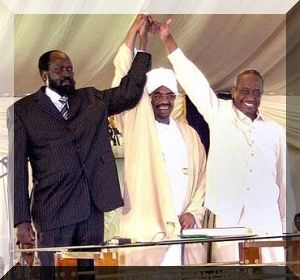 The signing of the Comprehensive Peace Agreement in Naivasha () on January 9th, 2005 was greeted by a torrent of optimism, generated by the international guarantees and momentum, and promises of economic assistance and political backing for the agreement. The Sudanese people believed that they had bid farewell to the era of civil war and armed conflict for good. Today, however, the situation is quite different. The Sudanese people are currently celebrating the fifth anniversary of the agreement in a climate full of fear for the near future, and more specifically the results of the referendum on self-determination due to take place in under a year. There is no party on the current Sudanese horizon, whether local, regional or international, capable of stemming the drift towards the secession of the South, or willing to do so. Rather, various actors are now scrutinizing and finalizing the details of securing a “peaceful secession,” and making arrangements for the “post-secession” scenario. Thus it appears that attention is focused on how to avoid the outbreak of a new war at that point.

However, the factors that carved out the Naivasha Agreement and created the prospect of the secession of the South have also had an effect in other areas. Darfuris are now talking, for the first time, about the right to self-determination, while the meeting, dedicated to addressing the question of and originally scheduled for late January 2010, has been indefinitely postponed. Meanwhile regional and tribal confrontations are flaring up in other areas of the country, warning of further fragmentation. And as a result of these conflicts, and of neglect, corruption and tyranny, starvation now threatens the whole of .

The Agreement: The Strong Role of External Forces and Weakness of Internal Factors

On the fifth anniversary of the Naivasha Agreement, its signatories - the National Congress Party (NCP) and the Sudan Peoples’ Liberation Movement (SPLM) - have just emerged from parliamentary battles over a number of key laws. The conflict between the two parties would have hastened the collapse of the agreement were it not for the decisive and rapid intervention of the and its other sponsors. This is what allowed the parties partaking in each joint meeting to repeatedly announce the death of unity, barring a miracle. At the same time, in a joint statement by their foreign ministers, , and the – three of the sponsors of the Naivasha Agreement – expressed their concern over the implementation of its remaining important articles. Further, the Special UN Representative, Mr. Ashraf Qadi, voiced the international organization’s hope that the disagreements could be overcome, and ten relief agencies operating in warned against a return to fighting and war. There is a consensus that 2010 will be a decisive and critical year, and represent a crossroads for as a unified entity. Indeed, some believe that it will be the final year in which a united celebrates the anniversary of its independence.

The current political reality in falls within what is termed the “Naivasha era,” or that of the Comprehensive Peace Agreement. Hence one cannot fully comprehend what is now taking place without knowing the background that created peace in Naivasha. One can argue that the agreement was weak and ambiguous from the outset, i.e. that it was open to many conflicting interpretations. Its flaws can be attributed to the strong role that was played by external forces vis-à-vis the weakness of internal factors. The two parties came under extreme pressures from the sponsors and observers to the negotiations, particularly after the negotiations had run on for two and a half years from the adoption of the framework protocol in Machakos on July 20th, 2002. The mediators finally tired of the foot-dragging and set a deadline for the signing, leaving some of the thornier issues, such as the problem of Abyei, for future negotiations. This is the “smooth landing” plan that has been promoted by the Americans. It is clear that neither side felt it achieved what it had hoped, that the international pressures were more powerful than the convictions and goodwill of the Sudanese parties.

The parties returned to , each with a separate agreement in their minds, i.e. each took from it what they wanted to understand, or rather from what they stood to gain most. From the start, each party was at pains to stress that it had not been defeated in the war and that it had profited from the peace. However, when the two parties sat down at the negotiating table they were both exhausted and incapable of resuming the war in case the negotiations broke down. It was therefore natural that they should accept a flawed settlement. Thus the conflict began in the midst of the peace agreement.

The NCP was better equipped to impose its vision than the SPLM, which has been damaged early on by the loss of its strategic brain, Jon Qarnak. The NCP endeavored to achieve a specific objective from the agreement, namely to benefit from the alignment of international forces by garnering legitimacy for itself for a six-year period, the timeframe of the agreement (2005- 2011). It further sought to prevent the agreement from becoming a means of dismantling the party quietly from within. At the same time, it was impossible to implement the agreement under the shadow of the prevailing totalitarianism, since most of its articles stipulated democratic transition. The agreement also stated that was in need of a transitional period during which the conditions would be created for holding fair and free elections and a referendum in a democratic climate. However, the NCP viewed it as a natural extension of its rule and as a period in the wider context of its Islamic cultural project, i.e. a relative shift away from the call to religious jihad made by the party in its more zealous early years.

The dominant Islamist elite entered the post-Naivasha era with the mentality of “stabilization” – in the sense of the term used to describe political power. In their view, it is not possible to achieve stabilization without exercising full control over the apparatus of the state, and appointing loyal rather than qualified people without partisan commitments. This exclusion was given the religious justification that it constituted giving preference to the faithful and the strong, in accordance with the Sunna. However, this approach was at complete odds with the letter and the spirit of the agreement, as it is not based on equal citizenship rights. Moreover, the NCP fought to uphold laws that restrict freedoms and to expand the powers of the security apparatus, including its right to detain without recourse to the public prosecutor’s office, and the continuation of former censorship over the press. This is what killed the agreement and caused the failure of the peace process: the Islamists wanted to have their cake and eat it too.

On the other hand, the NCP has been successful in holding its partner in the agreement, the SPLM, in check. The latter party itself helped in this, as it found it difficult to transform its ranks from militants and combatants into civilians able to administer and rule, and then to transform into a political party. The SPLM committed a fatal error by accepting the idea that the NCP was the sole guarantor of the Comprehensive Peace Agreement. It thereby allowed the NCP to isolate it from the other political opposition parties and forces. Thus the NCP singled out the SPLM. However, the SPLM felt eventually it had reached an impasse. The latest Juba Conference, held in late September 2009, was nothing if not an attempt at rapprochement with its former allies in the opposition. The SPLM began life as an original, founding faction in the opposition National Democratic Alliance party, and signed the Asmara Declaration on Decisive Issues with it in 1995, considered the most important and comprehensive document to have addressed the resolution of the problem of Sudan and the South.

In addition, the SPLM, which rules in the South, has not achieved any tangible progress over the course of the last five years. This failure has compounded the bitterness felt by the Southerners by confirming to them their vulnerability to neglect, even though some of them are partners in governance and wealth. Here the responsibility falls on the so-called National Unity Government, and on the Government of Southern Sudan itself. Charges of corruption and profiteering from government offices and have also been leveled at the Southern ruling elite. Furthermore, the NCP has an interest in encouraging under-development, deterioration in quality of life, and political divisions in the South, so as to ingrain the idea that Southerners are not capable of governing themselves in the future.

The conflicting positions adopted by the parties to the agreement have hampered the delivery of its benefits. Valuable time has been lost to squabbles and conflicts, and meanwhile the agreement’s expiration date has drawn near. The latter months of 2009 witnessed heated confrontations in parliament over the rules for the referendum, national security, public consultation, the trade unions, etc. that would have torpedoed the agreement were it not for swift and decisive mediations. The gap in positions widened to the point that the SPLM sought the help of the anti-NCP forces at the Juba Conference, and staged public marches with them on December 7th and 14th, 2009. Although the two marches went off peacefully, the police used excessive force against the demonstrators and the Secretary General of the PMLS and his deputy were arrested.

By holding protests outside official institutions, the SPLM managed to exert pressure on its partner in the agreement, the NCP. As a result the latter abandoned its attempts to pass the laws that were the source of the dispute. However, the situation highlighted the confusion that has characterized the political conduct of the two parties in this delicate period. For although the SPLM is a partner in the regime, it is at the same time demonstrating against it in the streets, despite the fact that there are joint formal institutions that bring the two parties together and to which they can resort to resolve disputes. For its part, the NCP did not include its partner in discussions over legislation, and passed laws by the technical majority (52%) granted to it by the agreement. But it backed down, and just 48 hours later called on parliament to review the laws it had previously endorsed.

This article has been read 2,101 times
COMMENTS