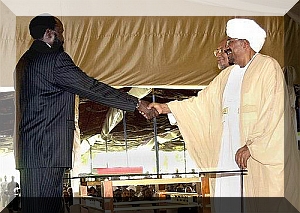 Internationalization and the American Strategy

The deliberate policy of internationalizing Sudanese issues, including the problems of the South, Darfur and the East, has undermined both national sovereignty and the national will. The regime has deliberately prevented the political opposition forces – which represented an overall majority at the last elections in 1986 – from playing a part in the resolution of national issues, as this would entail its implicit recognition of them. Instead, the regime preferred external mediation – specifically American and European – because of the sway of external pressures: all parties opposed to the regime have relations with the West, which could act as a driving force for them. It is striking that all the conferences and reconciliation meetings on Sudanese crises were held outside . The Salvation Regime also threw its weight behind a role for external powers.

Ironically, following the decision of the International Criminal Court (ICC) to issue an arrest warrant for President Omar Al-Bashir, the United States has begun to play a decisive role in steering and supervising the situation in . This can attributed to several reasons, including the fact that the United States is not a member of the ICC, and therefore will not take a hard stance on the issue and may search for another way out for Sudan, as the High-Level Panel on Darfur of the African Union is now doing under the chairmanship of former South African president Thabo Mbeki.

Secondly, there is the United States’ supposed influence among Southerners. Thirdly, there is an urgent desire to improve relations with , and the NCP is seeking to gain its approval and avoid sanctions and confrontation. The Sudanese security apparatus presented its American counterpart with valuable information on terrorism in the region.

The United States finally designated a presidential envoy to Sudan, who changes depending on policy (the latest of these envoys is retired General Scott Gration), and whose role has grown closer to that of the High Commissioner in . He constantly intervenes in disputes between the two parties, and it has become the norm for the United States to summon them to Washington or to meet them periodically in or Juba to discuss disagreements that could erupt between them.

A short time ago, Gration revealed that the American administration intended to send a permanent American team to Sudan to support the process of democratic transition and the elections, and to oversee the implementation of the Comprehensive Peace Agreement. This development follows the announcement of the Obama government’s strategy towards Sudan on October 19th, 2009, the preamble of which states that, “Sudan is at an important crossroads that can either lead to steady improvements in the lives of the Sudanese people or degenerate into even more violent conflict and state failure.Now is the time for the United States to act with a sense of urgency and purpose to protect civilians and work toward a comprehensive peace. The consequences are stark. ’s implosion could lead to widespread regional instability or new safe-havens for international terrorists, significantly threatening U.S. interests.”

The declared strategic objectives consisted of: (1) a definitive end to conflict, gross human rights abuses, and genocide in Darfur; (2) implementation of the Comprehensive Peace Agreement; (3) ensuring that Sudan does not provide a safe haven for international terrorists.

This warning appears in the text itself: “It must be clear to all parties that Sudanese support for counter-terrorism is valued, but cannot be used as a bargaining chip to evade responsibilities in Darfur or in implementing the Comprehensive Peace Agreement.”

She held the NCP responsible for the slow implementation of the agreement, and called for the laws that limit freedom of expression, assembly and peaceful protest to be repealed.

This article has been read 2,372 times
COMMENTS