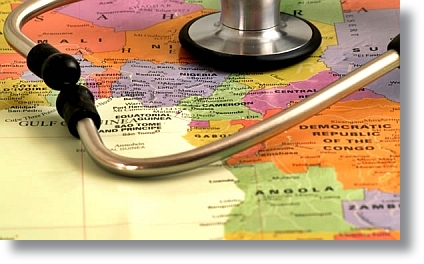 Progress in Africa towards the health-related millenium development goals has been perceptible, but slow. The consequences of the 2008 financial crisis occurred at a time of radically increased interdependence among nations. Money is tight, and public health is feeling the pinch. It is being felt at levels ranging from national health budgets, to commitments of official development assistance, to funds available to support the work of the Global Fund, the GAVI Alliance, and other global health initiatives.

The Millennium Development Goals boosted international health development. The first decade of this century saw the creation of numerous global health initiatives, new funding mechanisms, and new financial instruments.Commitments of official development assistance for health rose more than three-fold. Results seen in the past decade tell us that investment in health development is working.

The number of people in low- and middle-income countries receiving antiretroviral therapy for AIDS moved from under 200,000 in late 2002, to 3 million, then 4 million, and now beyond 5 million, an achievement unthinkable just a decade ago. The number of under-five deaths dipped below 10 million for the first time in six decades, and then dropped again to below 9 million. The annual number of people newly ill with tuberculosis peaked and then began a slow but steady decline. For the first time in decades, the steadily deteriorating malaria situation might be turned around.

Global health initiatives, like the Global Fund, like the GAVI Alliance, have done great good over the past decade. In Africa, for example, 76% of external financial support for malaria control has come from the Global Fund. These initiatives introduced the principle of results-based funding. And yet despite their own excellent, measurable results, they are now strapped for cash.

Other initiatives speeded the development of new vaccines to prevent pneumonia and diarrhoeal disease, the two biggest killers of young children in the developing world. Yet the implementation of these life-saving vaccines into routine immunization programmes is now in jeopardy because of funding shortfalls.

Tremendous progress towards the elimination of measles, especially in Africa, is in jeopardy because of funding shortfalls. A highly contagious disease like measles can resurge very quickly. Some 28 countries in Africa have suffered measles outbreaks this year.

Antiretroviral therapy for AIDS is a life-line, for a lifetime. Can we cut this life-line off because funds are running short, or because donors decide that investment in other priorities will yield a bigger payback? Do we have this moral option?

Progress towards polio eradication is also fragile. Last year, this region faced widespread polio epidemics across 20 countries of West Africa, Central Africa, and the Horn of Africa. The situation was so alarming that some people began to talk about abandoning the goal of polio eradication.Today, Nigeria has reduced the incidence of polio by a striking 99%. The Horn of Africa is again polio-free. No virus has been detected in West Africa since the start of May, though it is too early to say the outbreak has been stopped. We are deeply concerned about the outbreak in Angola, which is the only expanding polio outbreak in the world this year. Polio also persists in neighbouring Democratic Republic of the Congo, where the virus circulated undetected in one area for nearly two years.A resurgence of polio, of deaths, and childhood paralysis is the predictable consequence if we fail to stay the course.

What does it mean that progress towards the MDGs is so uneven in Africa? It means you cannot generalize about conditions in Africa. Old perceptions, that Africa is uniformly poor and needy, universally sick and hungry, or badly governed across the board, no longer pertain to modern Africa. Countries at similar levels of socioeconomic development have strikingly different health outcomes, and this already tells us something.

Governance is improving and democracy is gaining ground. A middle class is emerging. Fertility is going down. Populations are comparatively young, and this is an asset. Africa is poised to cash in on a “demographic dividend” that can perpetuate a cycle of growth.

The health-related MDGs are within the reach of African nations. Look at malaria. Ministers of health and heads of state set ambitious goals, and backed them up with campaigns.Some 240 million treated mosquito nets were distributed between 2006 and 2009. A further 70 million nets were delivered during the first half of this year.

In early December, a new conjugate meningitis vaccine, tailor-made and priced for Africa, will be launched in Burkina Faso in a mass campaign. This vaccine has the power to transform the terrifying, recurring epidemics uniquely seen in the African meningitis belt. As Niger’s minister of health argued, “A vaccine that Africa cannot afford is worse than no vaccine at all.”

A unique WHO-PATH partnership, the Meningitis Vaccine Project, developed the new conjugate vaccine. It is manufactured in India, using technology transferred from the USA. The price per dose is less than 50 cents. African scientists designed the study protocols and conducted the clinical trials. Canada assisted with regulatory approval. WHO pre-qualified the vaccine in June. The first 1.35 million doses arrived in Burkina Faso on 12 August.

During last month’s International AIDS Conference, the most exciting good news came from researchers in South Africa. They presented evidence that a microbiocide gel, for use by women, reduced HIV transmission by 40%, rising to 54% with good adherence. Though further research is needed, this is the first promise of a tool that helps women reduce their vulnerability to infection. It gives them a chance to move out of the role of being passive victims. The quest for better prevention tools owes a big debt to the nearly 900 South African women who volunteered to participate in the trial.

Every disease burden that Africa can bring down now frees capacity to tackle other priorities, or cope with the next global crisis that will surely come our way.

Africa ought to look for ways to eliminate waste and inefficiency. Cutting inefficiency and saving money is a far better option than cutting health budgets. The World Health Report for 2010 estimates that from 20% to 40% of all health spending is currently wasted through inefficiency. It points to ten specific areas where better policies and practices could increase the impact of expenditures, sometimes dramatically.

Africa needs to catch up with advances in information and communication technologies. Doing so has the potential to revolutionize health care. But Africa also needs infrastructure. You cannot deliver medicines in an email attachment. Africa needs infrastructure for water and sanitation, electricity, and irrigation. Africa needs roads, not only to transport goods to the market, but to extend healthcare to rural areas; transport people in need of emergency care, and to deliver medicines and vaccines.

Urban growth in this region is now the fastest in the world. Africa needs urban planning, not only to boost the economic productivity of cities, but also to alleviate the health risks in sprawling urban slums. The two go together.

As cities grow, municipal authorities often find it cheaper to import processed foods from abroad than to gather fresh produce from the hinterlands. This undermines domestic agriculture, further contributing to migration from rural to urban areas. Processed foods, rich in fat, sugar, and salt, and low in essential nutrients, contribute to the rise of chronic diseases and starve young children of essential nutrients.

This region is losing a traditional asset: healthy diets. Africa needs to revitalize agriculture, not just for economic reasons, but also to ensure that its people eat the right kind of food. This, too, is preventive medicine and the corporate business of government.

Africa is responsible for its own future and must shape its own destiny. The biggest share of spending on health continues to come from domestic sources, and this is commendable. Even so, external financial support and technical capacity building will be essential for some years to come.

This article has been read 2,268 times
COMMENTS