The Euro and Market Uncertainties in 2011 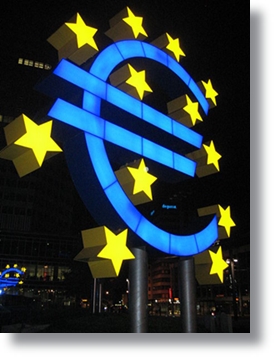 The Euro area financial problems are no where near being resolved yet. In one sense the problems are only just beginning. Two countries are insolvent: Ireland and Greece, and they need to be nursed back to financial health. Spain has to refinance debt of the order of Euro 300 billion in 2011, which may prove beyond the markets’ capacity to absorb given the recent sharp rise in Spanish Government 10 year bond spreads to the 5.45% level. Peripheral Euro zone area economies are contracting and unemployment is rising as deflation takes effect.

The near doubling of the capital base of the European Central Bank (ECB) announced recently, from Euro 5.76 billion to Euro 10.76 billion gives some idea of the direct action that may become necessary to support not just Greece and Ireland but also the Spanish debt markets. There is also the risk of further market contagion, first to Portugal and then to Italy. Germany, led by Chancellor Angela Merkel, has stated clearly that it has no wish to bail out what it sees as profligate countries.

The ECB has, though, so far bought approximately Euro 71 billion of Irish, Greek and Portuguese government bonds in an effort to prevent bond yields from rising. The Bundesbank in Germany is thought to have objected strongly to these purchases and they may also be in breach of EU Treaty law. In effect the ECB is creating for itself the reputation of acting as a “bad bank” for the illiquid peripheral EU states’ government bonds. Not only could the ECB face “mark to market” losses on these bond purchases but it also has extended short term loans of the level of Euro 335 billion which it has provided to Greek, Irish, Portuguese and Spanish banks, albeit these are collateralized by residential mortgages. The most recent data show that Irish banks have borrowed Euro 136 billion from the ECB. Add to this the US$ 760 billion of Spanish debt securities held by EMU countries (of which France holds US$ 252 billion, Germany US$ 212 billion, Luxembourg US$ 77billion, the UK US$ 69billion, Netherlands and Ireland US$ 60 billion each and the outlines of the problem become clearer.

In Brussels the EU’s 27 national leaders decided at a summit on 16 December 2010 to set up a permanent safety net for Euro zone governments from 2013 onwards. They also vowed to do “whatever is required to ensure the stability of the euro area as a whole” – a message that, no matter how vaguely worded, confirms that even more far-reaching measures are likely after the new year to address Europe’s unfolding debt crisis.

The Euro 440 billion European Financial Stability Facility (EFSF), set up in May 2010 as a mechanism to resolve financial crises in Europe, was an attempt to address a solvency problem through providing additional liquidity – with initial liquidity facilities for Greece and Ireland. But both of these countries are technically insolvent – in that the bond markets are demanding premium yields to finance these countries at levels which indicate either potential default or impossible burdens on their domestic budgets.

It is envisaged that the EFSF will evolve into the European Stability Mechanism (ESM) – but this, at Germany’s insistence, will contain provisions for bondholder haircuts and will require amendment to existing Euro treaties in March 2011 and ratification by parliaments thereafter. The reaction of the bond markets has been predictable – with yields continuing to rise but it hardly engenders confidence that the refinancing of existing bonds, let alone new debt issuance for the problem countries, can be achieved – thus putting more pressure on the resources of the ECB particularly in the run-up to 2013.

The stress tests were far too lax

It strikes me that two features are likely to prolong the uncertainty currently prevailing in the markets. The first is the difficulty many governments have in “balancing the books” or at least restrict their budget deficits to the level of 3% of GDP (this Euro Stability and Growth pact target budget deficit level has rarely been achieved by any member country since the Euro was introduced). In the absence of strong GDP growth, governments have had little choice but to cut spending plans and/or raise taxes – neither of them popular with voters. Bond markets are understandably sceptical about any government’s ability to deliver on their promises.

The second is the health of banks in the Euro zone – as defined in two ways: capital to total risk assets alongside loan to deposit ratios. The long timetable announced by Basel regulators for increasing the level of bank capital has not only aroused the suspicions of the bond markets but there are also deeper suspicions that many banks will trim their loan assets rather than raise new capital in order to comply with the new capital regulations – which hardly bodes well for supporting GDP growth. The stress tests carried out by the EU on leading European banks last July were, with hindsight, far too lax.

There are many European banks that today still extend loans well in excess of their deposits (which is not the case, it should be said, for banks here in Mauritius) and so rely on the wholesale money markets and debt capital markets for funding. This risky business model was ruthlessly exposed in the aftermath of the Lehman’s bankruptcy in late 2008 when the debt capital and wholesale money markets ceased to function and central banks had to step in and recapitalize banks as well as recycle liquidity so as to restore order in financial markets.

The ECB therefore may have a huge, and some believe a perhaps impossible job, in front of it with some commentators believing that the securities purchase programme of the ECB may need to be extended from a volume of Euro 70 billion to as much as Euro 1,000 billion if the bond markets and wholesale money markets dry up. What is also not being mentioned in official circles is, of course, the “great unmentionable” – can the Euro survive in its current form? Within the confine of the single currency, devaluation is not an option.

It is hard also to see Euro zone member country bond defaults as option either – despite Germany’s plans for post 2013 bondholder haircuts. Economic contraction and rising unemployment in Greece, Ireland, Portugal, Spain and Italy are already bringing back memories of the 1930’s depression.

It would seem in 2011 we will be much nearer to finding out whether the “deflation therapy” being increasingly imposed by Brussels on these countries within the confines of the Euro with its internal fixed exchange rate will be acceptable to their electorates, or whether a return to individual currencies and fiscal sovereignty will be required to get unemployment down. It should perhaps be remembered that, alone of the Euro zone countries that joined the Euro just over ten years ago, Germany never abolished the Deutschmark, but merely suspended it – storing all the notes and coins. It would certainly be a huge logistical exercise to reintroduce the currency – but not one beyond legendary Teutonic efficiency. Certainly the departure of Germany from the Euro zone – with the implication of a fall in value for the residual Euro – might be what is required eventually to get Europe back to work.

However, this is conjecture. What we know and would observe is that many countries in Europe are confronted with unsustainable fiscal deficits and rising sovereign debt levels, rigid labour markets, continuing high levels of unemployment, a fixed internal exchange rate within the eurozone and the relatively high Euro exchange rate against the US dollar. Little relief can be expected from the US as the Federal Reserve pursues a course of monetary expansion and the US Congress pursues a lax fiscal policy to solve the US’ own unemployment problem.

All this can be expected to result in slow and low levels of eurozone GDP growth, and when this is accompanied by a slow recapitalization of European banks against the backdrop of sceptical international bond markets and continuing austerity packages – the most likely outcome will be growing political unease and pressure to pursue a different course of action. Continuing international sovereign bond and foreign exchange market uncertainty in 2011 is thus to be expected. Mauritius is indeed fortunate not to be part of a wider currency union.

This article has been read 2,015 times
COMMENTS