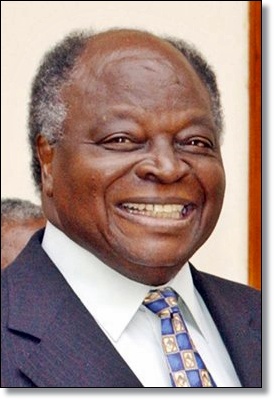 Kenya’s president Mwai Kibaki’s recent take on who should inherit his office is commendable. He stated categorically that he is not going to busy himself looking for his stooge or protégé to take over from him as soon his term in office lapses. This wisdom should be emulated by other east African rulers who have shown no signs of relinquishing power even when the constitution states so. We recently evidenced some machinations in Rwanda and Uganda where the constitutions were tampered with to enable current rulers cling unto power illegally and unnecessarily.

Kibaki’s take shows the world that he does not intend to mess his legacy. Despite his dark side especially the way he secured his second term in office, Kenyans are likely to forgive him shall they consider the changes Kibaki ushered in.  One of his legacies is the new constitution of Kenya. Through new constitution, accountability is now reality in Kenya. Bigwigs are paying tax and those that seem to be in slumber are forced to toe the line. Again, under Kibaki’s watch, Kenya’s economy has performed relatively well compared to other countries in the bloc.  Kibaki will be remembered as the African president who harbingered power sharing in Africa ahead of Zimbabwe and partly Zanzibar.

Another feather on Kibaki’s hat is devolution of power. Kenyans are now used to the president that can be faulted when he goes wrong. Refer to how Kibaki’s choice of Chief Justice was shot down by the opposition. Kibaki did not superimpose his choice. Instead, he let the constitution produce the CJ everybody appreciated. This is different from former regimes under which the president was a demi-god who apart from being the law, he was above the law. Kenya’s president is now a mortal being that can make mistake and be taxed just like any other common mwananchi.

If anything, Kibaki’s take is a new wake up call for other rulers who still cling unto frozen ideas of ‘me forever’ as  seen in Uganda where the strong man has been in power for more three decades and has never shown signs of retiring despite being above normal retiring age. If he does think about it, he’d like to see his son or his stooge takes over from him so as to protect him and be controlled by proxy.

In Tanzania, the current president came to power by suspicious means whereby public coffers were broken to enhance his rise to power. He has nary stood to defend himself, deny or take on those implicated in this heinous crime against the poor.

Currently, Kenya is an ideal and exemplary democracy ahead of all countries in East Africa bloc. Freedom of expression and freedom to receive and disseminate information is real. Media is awash with stories on corruption.  The Kenya that used to kill, silence and force journalists into exile is long gone and forgotten. Kenyans can demonstrate at any time they deem fit. This cannot be done in Uganda. Refer to the recent beatings and humiliation of opposition leader Kizza Besigye when he decided to support the walk to work move that aimed at reminding the authorities that economic situation in Uganda was worse.

Thanks to Kibaki Kenyan police force is currently undergoing a lot of face lift among which is being taught human rights and accountability. Kenya’s army is for the protection of mwananchi instead of big men and their bootlickers.

To Kibaki’s credit, his spouse, sons and daughters don’t featuring high when it comes to running the country as in Uganda and Tanzania. During Daniel arap Moi’s notorious era, Moi’s children were power brokers to reckon with. This is still going on in Tanzania and Uganda where the names of the sons of the presidents Ridhiwan Kikwete and Muhoozi Museveni are featuring high respectively. Again, if those responsible watched how publicly Egyptian former strong man was presented lying in a stretcher in court, sick, caged and on drip, surely they might have gotten a very crucial lesson if they nicely use their brains.

Shall Kibaki live up to his promise of not planting his protégé in the office of president; he will be remembered as a statesman who shaped the future of Kenya. Retire well Mwai Kibaki. All this depends on how you are going to live up to your promise of honouring the constitution. Importantly, your colleagues need to borrow a leaf from you shall they want to leave good and sound legacies behind.

A Canadian based Tanzanian and author of Saa Ya Ukombozi

This article has been read 2,288 times
COMMENTS