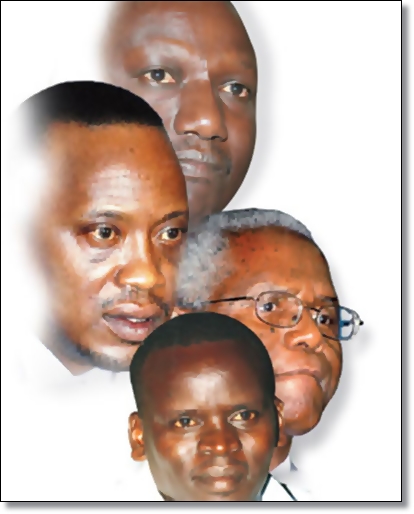 In their tenth Extraordinary Summit of the East African Community (EAC) Heads of State that took place in Arusha, on 28 April, presidents came up with a laughable resolution calling on expanding the jurisdiction of East African Court of Justice (EACJ) to cover crimes already under the jurisdiction of International Criminal Court (ICC). This was a response to another horrible proposition made and passed by the way of motion by East African Legislative Assembly (EALA) that shamelessly demanded case facing four Kenyan   that is before the ICC be recalled and the suspects be tried home.

In proposing the Motion demanding that EACJ take cases from ICC, Dan Wandera Ogalo (Uganda) said, "The indictment of the four by the ICC may alone not, and will not, resolve the underlying issues that led to the said violence that grasped the entire nation of Kenya."

in seconding the motion , Gervaise Akhaabi (Kenya) said, "If we don’t have the cases referred to EACJ, we are selling our independence; we are selling our dignity." Ironically, when the same go cup in hand begging from rich countries, they don’t sell their dignity!  Is there any dignity left for begging countries so to speak? Who coerced them to sign the Rome statute?  It is interesting to hear such words from Kenyan East Africa Community Assistant minister Peter Munya who view ICC as a colonial tool. He was recently quoted as saying, "There is a neo-colonial element in the trials. ICC is a colonial instrument."

Isn’t this abuse of international law? legally speaking, when two laws  namely national and international collide,  chances are that international law will stay whereas local one will abdicate given to the fact that the country whose law is overridden is a signatory of the same international instrument enacting or applying the said law.

Sycophancy, political wheel deals and what not are the rights of any person if such things do not infringe on the rights of others or break some rules.

What transpired recently during East African heads of states’ conference in Arusha amounts to blasphemy if not negation to the rule of law. In their communique, the presidents agreed that the East African High Court be vested with power to try offences resulting from violations of human rights such as Post Election Violence (PEV) that happened in Kenya in 2007/2008. Why should the court even the law act retrospectively? Are the Ocampo Four more important than other issues touching directly on the people of EAC especially the victims of PEV? Was this the only issue that needed fast tracking compared to others especially tariffs, immigration, democracy and human rights? What a shoptalk! Where were they before ICC reigned in? Didn’t ICC come in after Kenya refuted to form its own local tribunal? What of the jurisdiction of ICC? Is this possible? Are they serious or the aim is to please indicted friends?

Frankly, the move by the heads of states of EAC did not augur well with the people of the region. A Tanzania weekly that carried a headline “Kenya penetrates her agendas in EAC” speaks volumes. It shows that Kenya duped other members to do her dirty laundry. It draws a conclusion from Thomas Hobbes in his book Leviathan that “Again, men have no pleasure (but on the contrary a great deal of grief) in keeping company where there is no power able to overawe them all.”

Is ICC’s verdict on Charles Taylor starting to bite? For the motion demanding that four Kenyans indicted by ICC be tried locally came just a day after Taylor was found guilty. If they mean business and not machinations, why don’t they even ask Joseph Kony to be tried in EACJ as well? Suppose their prayers are given, isn’t this evidence that the four will not be persecuted as per the law demands but as per politicians’ directions? If the government of Kenya failed even to arrest them but is able to fight for their case to be tried home, isn’t it going to keep on influencing EACJ?

If East African presidents want to save their dignity, they should heed the calls from those opposing their undertaking that is likely to backfire. Davis Malombe, Deputy Executive Director of the Kenya Human Rights Commission (KHRC) gave them delicious nuggets when he said, “We welcome President Kibaki’s statement that Kenya still wishes to establish a local mechanism to prosecute international crimes, and it should be translated into concrete action in the form of a credible mechanism that will vigorously pursue and bring to justice other perpetrators not currently facing trial at the ICC.”

Partisan politics and policies as advocated by EALA and the East African Heads of States are likely to ruin the region whose economy still depends on begging and loaning. Instead of wasting time and resources to save a cabal of the high and mighty, our rulers should invest their time and resources on combating crimes, carbuncular ethnicity, corruption, dependence and abuses of power that are rampant in the region.  It would make more sense had EAC presidents bothered to think about the victims instead of allegedly perpetrators. Otherwise Arusha summit amounted to a shoptalk due to what came out of it as a resolution.

The author is a Canada based Tanzanian and author of Saa Ya Ukombozi.